Glimpses. David Maljković’s alterations in B...

David Maljković‘s third solo show at Massimo Minini Gallery in Brescia, Glimpses, marks the renewal of a consolidated relationship between the artist and the exhibition space. The previous Retired Forms (2010) and With the Gallery (2015) had been occasions to present a research made up of collages, video installations, everyday objects absorbed in a personal discourse, often steeped in references to the post-war history of Croatia, where Maljković was born in 1973; at the same time, similarly, the halls of the gallery in Brescia transmuted with scenographic mise-en-place: blue curtains and theatrical backdrops for Retired Forms, mid-air lofts in With the Gallery. In the wake of these experiences, Glimpses presents itself as a sort of balance sheet on the work already done and on its potential amplification of meaning, paying attention to the last results of a research in constant evolution.

The proposed works, scattered with an essential set-up this time in which the white of the walls dominates, are re-elaborations of elements that Maljković makes his own with a transformative process. Variable is the material on which he chooses to intervene. It may be his work, or an evocative find of the Yugoslav past, or even furnishings in the gallery itself. In such heterogeneity, the common thread that unites the works is the use of epoxy resin. Grafted in the form of a reactant, now colored, now transparent, this viscous mixture englobes, drips, stains, covers, and then solidifies and crystallizes the objects in the static nature of a pose. Here then follow, immobilized by the hardened resin, aluminum sheets, display cases, Boby office trolleys by Joe Colombo, wall displays and even the fragment of the ceiling of a neglected Croatian grand hotel. Aided by the repeated combination with plexiglass plates, a material that in turn suggests an idea of ​​fixity and conservation, the works on display evoke fossil and hieratic presences, changes of state, stratifications that have occurred in multiple temporal phases.

Through his sculptural assemblages, wrapped in a procession silence, Maljković stages an open and self-referential method. There is a clear-cut stance, that of appropriating – or, as the case may be, re-appropriating – of finite forms to make them return to itself, inducing a mutation that the artist conveys according to his own subjectivity. Thus a new vital circle is generated, with objects that undergo unforeseen alterations and are set in motion in the flow of time and things. The effect is that of an alienating suspension, in which one feels the cyclical nature of change and a precarious calm. In the fleetingness, however, there remain those “glimpses” suggested by the title of the exhibition, or metaphors of small flashes, brief appearances as a twinkle that suggest future developments. And it is in this glimpse beyond the permanence that the author seems to indicate us other possibilities, vague traces of something that has been and that we still do not know how it will evolve. 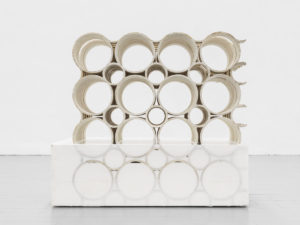 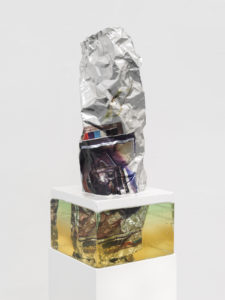