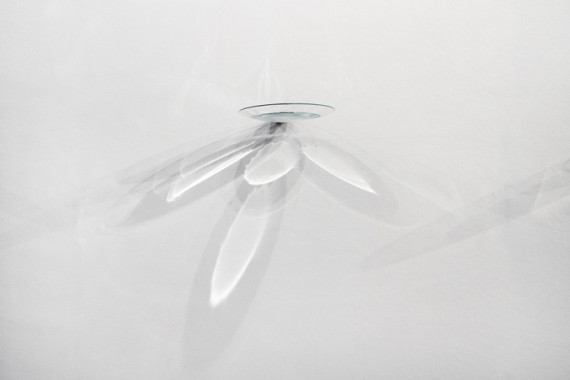 At the beginning of “The Waste Land” Thomas Eliot quotes a fragment of Satyricon by Petronius which says: “Sibilla what you want? I hope to disappear.” The Sibyl is the prophetess of Cuma famous for her enigmatic oracles that Apollo condemned to grow old without dying: worn and withered like a cicada, she lived her eternal agony in the temple of the god locked in an ampoule. Even the fate of water, protagonist of Gregorio Botta ongoing solo show (Naples, 1953) in Studio G7 gallery, is to evaporate to dissolve in the cycle of life, leaving traces of itself in an apparent vacuum that actually leads to its presence as refraction, mirage or lymph.

The Neapolitan artist’s poetics has been focused for years on exploring the fine line between full and empty, understood as a dialectic between presence and absence, through the progressive lightening of the materials of his works in a continuous renegotiation of the balance between the detection of a minimum level of perception and the evocative and symbolic efficiency of the artwork. His sculptures evoke the passing of an unperturbed time returned as a not quantifiable and definable entity within the parameters of human finitude and arise from the combination of intentionally poor natural and artificial materials. Wax, iron, linen, cotton, lead and glass are basic materials with a strong anthropological appeal due to their secular sedimentation in our craft history and for this reason they deeply belong to us as much as water we are mostly made of. From a formal point and composition of view sculptures by Botta express the same essentiality: plans meet each other with calmness, volumes are camouflaged with surfaces and cavities run parallel incorporating transparent void while the net contours of shadows that they generate amplify their three-dimensional projection. The rarefied, ancient and granular color (green land from Nicosia, Pompeii red and ocher) is a softly textured surface that is added to the composition as a subtly sculptural material substantiating and nourishing the ethereal presence of the glassy or neutral shade plains. The localized appearance of color, which is reflected by a diaphanous gauze, wedged in the crook of a fabric highlighting its topography or layered on the surface as skin, alert perception that only through aprolonged attention captures the network of reflections, refractions and reverberations which constitutes the most intimate essence of the work.

The idea of ​​footprint and dimming in Botta’s poetry is closely linked to his vision of art and existence: if the look can never fully grasp the object on which it focuses, but it is an intermediate between consciousness about what it looks like and what you know to be there, even life is a mystery impossible to define that man can only love and evoke for not making it vanish. Thus, for example, gold, red and prominence of wax that interact with the glass plates of the series “Untitled” (2016-2017) are perceived by looking at the work side or transparency but you do not exactly know what they are. Their indecisiveness becomes a metaphor of the imperfect knowledge granted to man, understood as what emerges from the realization that there is more beyond the visible, and the mediating role of art that allows us to get in touch with what is not us and what one can not define maintaining intact its complexity.

Like the ancients Botta is inspired by nature which preserve the arcane balances governing the life cycle and from here comes his will of removal and relief material that characterizes his most recent works. The idea is to offer a scenery for the spontaneous manifestation of an image solicited with as little effort as possible: glass, light and water create an ever-changing but no less real design. The image is fed by time and care, such as the glass bowls in the installation “What desires water” (2017) that must be constantly filled to balance the physiological evaporation of their contents, with a meditative practice that looks like an offering addressed to some unknown lay deity. Contemplation returns in small houses made of different materials where Botta evokes in a contemporary sense the Romans lararia, niches destined to the worship of ancestors protectors of the family home. At the center of these sacred spaces without content water and life are flowing, but access is blocked and the look you can only insinuate into a narrow opening to intuit their presence.

Rejecting the coldness of a totally mind-set that the essence of his work could immediately lead one to suppose, Botta’s organic and poetic minimalism combines the perception and the materialization of the void with the physicality of the work that remains always a body proud of its own imperfections and of the manual labor that shapes it with handmade tools. 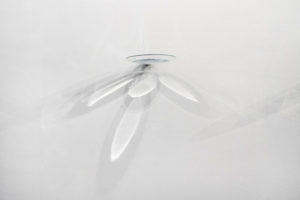 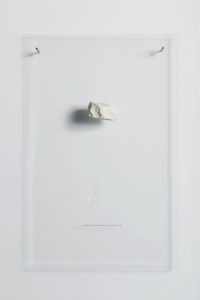 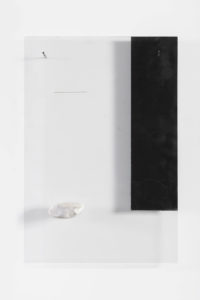