Hayy Jameel: the first multidisciplinary hub for a...

In conversation with Mauro Bar..

The center, inaugurated on 6 December 2021, includes contemporary art galleries, art and design studios and the first arthouse cinema in the kingdom. Hayy Jameel is Jeddah’s first major public building and opens its doors with a five-month inaugural program completely free to the public. After the success story of Art Jameel (independent organization) in Dubai, the new opening of the complex coincides with the celebration of 75 years of charity and social activities of the Jameel family.

In particular, Fady Jameel, president and founder of Art Jameel, wanted to underline that Jeddah is about to have a new destination and that this great project has been possible thanks to the collaboration of important national and international cultural partners. The goal was and will be the involvement of the local community for all cultural productions that will drive positive and impactful change for the city and the artistic communities of the region and beyond. Although the idea of ​​creating a permanent art space in Jeddah came about two decades ago, it was in 2014 that Art Jameel acquired the land that would become Hayy’s site. Chosen for its location in a residential neighborhood, close to schools and a jazz music center, this institution aims to fit into the everyday life of the community.

The architectural project, which occupies a 17,000 square meters area​​, was entrusted to the multidisciplinary architecture studio Waiwai, based in Dubai and Tokyo, led by architects Wael Al Awar and Kenichi Teramoto recently awarded the Golden Lion as curators of the United Arab Emirates Pavilion at the 2021 Venice Architecture Biennale. The new space boasts a contemporary and bright design. Fundamental to the project is the main central courtyard, which acts as the engine of the architecture and programmatic heart of the community. On the upper levels of the building, the courtyard is surrounded by shaded and staggered terraces which function as an extension of the courtyard and allow it to be conceived as a spatial whole that connects each level of the project. On the ground floor, the courtyard is enriched with seating among natural and green vegetation. With its strategic location, the courtyard provides direct and continuous connections to architectural services: art exhibition spaces, offices, comedy clubs, theatres, libraries, artist studios, restaurants, commercial spaces and multipurpose spaces. On the top floor there will also be some studios for artists (Hayy Residents). Additionally, Hayy Learning will be the educational platform that will offer courses that can last from four months to two years.

Hayy Jameel’s building design has received several architectural awards, including gold at the Hong Kong Design Awards; Silver at the New York Design Awards; the Honour Award for Exceptional Design from the American Institute of Architects (Middle East chapter). The architecture of the building was completed by a colourful facade commissioned to the Saudi artist Nasser Almulhim with the project entitled: “The dove, the partridge and the crow”, inspired by the homonymous folk tale and developed in collaboration with the artist and architect Tamara Kalo.

The Hayy Jameel Façade Commission is an annual program that offers an artist the opportunity to develop an important public work on the 25-meter “canvas” placed on the front of the building, an integral feature of the architectural project. The 2021-22 commission took place through a direct invitation but, in the future, the work will be selected through an open call.

The Bricklab architecture studio from Jeddah will give shape and content to the first independent film house in the kingdom (Hayy Cinema): it will include a 165-seat theatre, a screening room, a multimedia library and an educational space and the opening is scheduled for April 2022. For the opening season, the institution focuses on the visual arts (Hayy Arts) and features different exhibitions.

“Staple: What’s on your Plate?” is a group exhibition co-curated by Rahul Gudipudi of Art Jameel and Dani Burrows from Delfina Foundation (London). They investigate what we eat and the intertwining of food with memory, ecology and place and consider our relationship with food as a starting point for exploring a broader climate emergency landscape. Everyone eats. Food can unite, delight or disgust. “Staple: What’s on your plate?” invites to explore some of the hidden stories of the food we consume every day. The idea of ​​”base” is infused in the ingredients that make up the works on display, including water, dates, rice, honey, sugar and chocolate, as well as in the essential elements inherent in the cultivation and consumption of these objects, such as work, care, heritage, religion, migration,

Sancintya Mohini Simpson‘s work explores the complexities of migration, memory and trauma by addressing the gaps and silences within the colonial archive. In support of the community, a large public interactive learning program involving artists and scientific researchers, as well as a selection of documentaries in rotation; interviews; cooking and sowing workshops; food and pop-up tours with local producers. The artists who created the works are: Mirna Bamieh, Bricklab, Mariam Al Noaimi, Cooking Sections, Salma Serry, Slavs and Tatars, Lantian Xie and Raed Yassin together with Ute Wassermann.

Sultan bin Fahad‘s work: “Once was a ruler” (2019) is a composition of his photographs of ancient sculptures depicting monarchs from the northern Arab kingdom of Lihyan. The superimposition of the photographs with radiographs of one’s own body captures the human spirit of these sculptures from the fourth and third centuries BC. civilization. Affirming their past existence as humans who once ruled the Arabian Peninsula, the artist comments on the often misunderstood state of God-like worship of these rulers.

“Nostalgia Takes Us to Sea but Desire Keeps Us from the Shore” (2010) by Manal Al Dowayan depicts an imaginary conversation between city dwellers and their urban landscape: an unstable, symbiotic relationship in a constant state of uncertainty. Through this work, Al Dowayan highlights the distinct physicality that nostalgia imposes on the mind and its movement. He captures the background image by collecting photos taken by a car moving between two different locations on the same bridge connecting Saudi Arabia to Bahrain. A poetic verse by the prolific Saudi poet and writer, Ghazi Al Gosaibi overlaps with photography, rendered in neon. The poet’s words represent the conversation between the place and its residents and at the same time address the state of being “in between”. The work reflects the movement between two spaces, both physically and emotionally, and the barriers encountered within both.

The exhibition “Paused Mirror” by Osama Esid presents a series of portraits of artists made using the” wet collodion” methodology and it was developed through a collaborative journey through the Kingdom; Esid set up field studios in and around Riyadh, Eastern Province and Jeddah, and interacted with several artists and host organizations. The project aims to be a multigenerational tribute to the artists, who are at the heart of Hayy Community

There isn’t doubt of the enormous transformative potential that Hayy Jameel wields in a rapidly changing country like Saudi Arabia; the responsiveness of the organization will continue to be tested over the years to come.

For all the images: courtesy Hayy Jameel 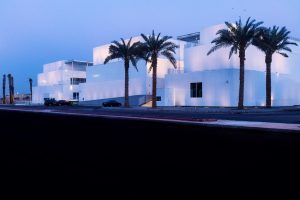 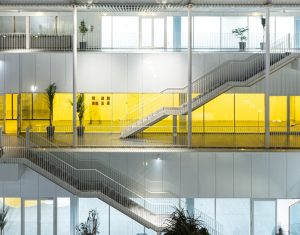 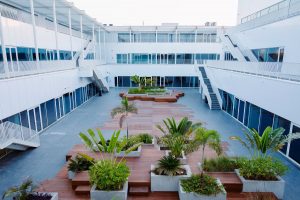 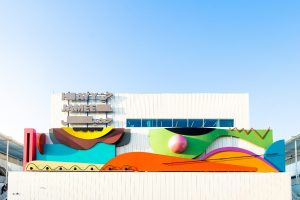 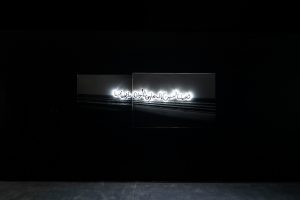 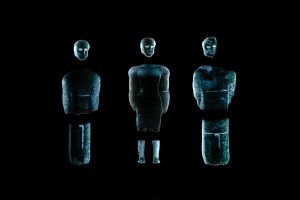 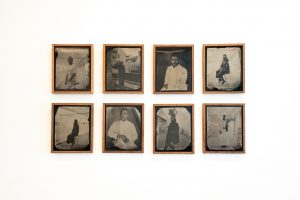 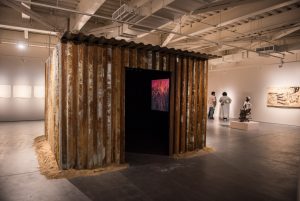