One of the most fascinating works of the 58th edition of the Venice Biennale is This is the future (2019), in which Hito Steyerl proposes a wonderful garden hidden in the future, whose digital flowers, which sprout, blossom and wither without ever really existing, question the role that artificial intelligence will have in our lives. The German artist, born in 1966 in Munich, focuses her poetry on visionary and alienating experiments that take the form of video installation, documentary-essay and performative lectures. Careful observer of herself and of the world, with her work she investigates how the circulation of images in the era of digital dissemination and new technologies conditions the construction of our globalized subjectivity, bringing out serious social and political tensions, unpublished in the previous human history. The artist works with new technologies, generally perceived by non-experts as mysterious and almost magical algorithms, to understand their meaning and impact in everyday reality through refined combinations of fictitious elements created on purpose and more specifically documentary passages. Since the beginning she has concentrated her research on the identification of the processes of translation of images between different areas and territories, imagining the digital circulation as a flow of liquid that crosses different transition states, in reference to which she coined the lucky definition poor images, that alludes to the status of images depleted by transmission between different file formats until they become absent detectable abstractions.

Until September 1, at the Castello di Rivoli Museum of Contemporary Art, the spectacular installation The City of Broken Windows will be on display, previewed here last November, which reflects on the future of artificial intelligence and on the fragmentation of information and images conveyed by contemporary media. The project stems from a video documentary (Broken Windows, 2018) created by Hito Steyerl in one of the most advanced research centers that teach AI to recognize the sound of breaking windows to use this algorithm in the production of home security devices and alarm. In a large hangar for air vehicles built during World War II in Cambridge, England, a team of engineers and researchers tirelessly break window glasses to improve the sensitivity of artificial intelligence through a sophisticated sound inventory. Taken together, the sounds of broken glass can be considered as a new language, cryptic and elusive, in which the boundary between the regulation of automation and the automation of regulation fades to make the two aspects indistinguishable.

In the space resounds at irregular intervals a disturbing melody of fragments and reverberations that the human ear cannot classify with certainty, while a line of wall text forms a labyrinthine narrative apparatus composed of the condensation of different sources, such as statements taken from interviews to researchers involved in digital engineering, excerpts from “The story of the broken window” used by Frédéric Bastiat in a famous essay on economics and disconnected phrases generated by a misreading of information by AI. The words, alternatively placed in large letters on the walls of the exhibition space and on the window glasses that interrupt their continuity, establish a lapidary conceptual and symbolic dialogue with the white of the plaster and with the Piedmontese landscape that can be seen in transparency.

In a complementary position to Broken Windows, on the opposite side of the room, the video Unbroken Windows (2018) tells the work of the activist artist Chris Toepfer, committed through his association “The Neighborhood Foundation” to fight urban and architectural degradation in the most disadvantaged suburbs in Chicago, painting flower-clad windows on the exterior walls of crumbling buildings where all the openings are walled up to prevent access. Steyerl’s project, which creates a surprisingly harmonious setting while focusing on the emphasis on doubt and on the existential implications of different systems of thought, offers a crucial contribution to the role of the digital imaginary in shaping emotions and the experience of reality. 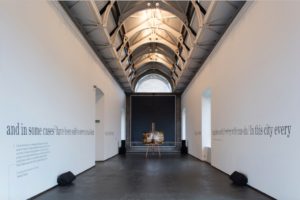 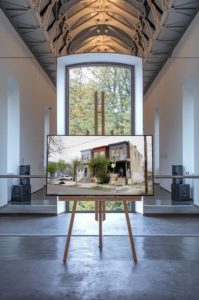 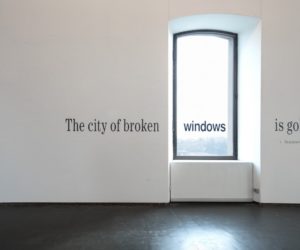