In conversation with Giancarlo..

Hypersurface. The secret life of surfaces

Francesca Leone. The art of be..

Hypersurface. The secret life of surfaces

In Hypersurface, an ambitious survey of the slippery ways of approaching the overlooked concept of surface, the ‘superficial’ gets dissected to offer a glimpse into what goes on beyond it. The visual arts have been in a love relationship with surfaces for centuries. It was about 600 years ago that the geometrical formulation of linear perspective broke the limitations of a bi-dimensional support and conquer the representation of reality. The painted surface was the first screen opening endless possibilities to the creation and perception of visual realms and indeed the category of ‘Screen’ plays one of the key roles in the exploration of the idea of Hypersurface.

The group show curated by Caterina Avataneo and Nicole Tatschl at the Austrian Cultural Forum in London presents the work of 11 different artists and duos. Its intention is tidying up the infinite connotations of ‘surface’ by breaking the concept down into three intertwined groupings.

The category of ’Screen’, investigated alongside ‘Skin’ and ‘Wall’, is a macrocosm in itself and addressing its meaning nowadays cannot lead far from commenting on the implications of perpetually tapping our fingers on some electronic, hyper-sensitive surfaces. The curators chose to dedicate a prominent part of their exploration to the role of surfaces in a digital context. Beyond the meaning of ‘Screen’ as hardware that makes physically possible the use of and access to contents, surfaces of tech devices are considered in the show as a gateway to realities other than our tangible and to a web of immaterial relationships that increasingly define and direct our personality and life choices.

Main references to the omnipresence of screens in our life are the works of Hannah Neckel and AVD. Where Neckel’s piece gives a physical outcome to her (mainly) social media-based practice by creating an installation inspired by her online persona, the London based duo AVD maintain their work at a digital stage. Relying on some geeky coding practice, AVD sneakily infiltrate the digital lives of fellow artists and viewers. The programming developed for Hypersurface expands on the notion of surface as a trigger for exchange. The project works on two different levels: in the gallery space (on a screen showing the constant activity puts in motion by the artists interacting with other Instagram accounts and hashtags related to the show) and on everyone’s phones (where visitors are prompted to get involved into the newly created digital community around the exhibition). The highly voyeuristic level of this interaction places under scrutiny our digital selves and the ways we create and share contents and information.

The life of digital alter egos existing through a screen is also talked about by Swedish artist Rustan Söderling. In Tannhäuser Gate (Not Really Now Not Anymore) the screen works as the eyes of the wanderer exploring a post-apocalyptic city. The digitally rendered video becomes the extension of the main character’s body. Stine Deja and Marie Munk’s work is the most uncanny observation on the category of ‘Skin’. Touching upon contemporary anxieties induced by the blurring of boundaries between biological and artificial bodies, the realistic reproduction of our human shell in Synthetic Seduction leaves us to wonder whether we should be unsettled by the humanoid blob living an autonomous life or we should take pleasure in the soothing rhythm of its soft moves.

In the general selection of the works in the show there seems to be a natural distinction between the digital domain and the material one. Aiming at providing a comprehensive display of different possibilities, the exhibition includes a more physical approach to the idea of surface. In the world of the visual arts, the brushed surface cannot be forgotten. It is meaningful and almost paradoxical that where we meet paint in the show the representation of reality as found in the digital section is completely abandoned in favour of tactile feelings and sensuous inputs. Simon Mathers presents old-fashion crafted, two dimensional pieces. Mathers’ playful works are at once pink skin ruffled by some biomorphic carving and window-like structures still bearing the writing of someone manipulating the condense of their breath on the glass.

A spatial approach to surface as painting is, among others, the one of Julius Heinemann. The artist’s site-specific intervention reflects on the peculiarities of the architecture that hosts it. The semi-transparent layer painted on by Heinemann is an optical journey imposed on the viewers using the staircase where the piece is installed. It is subtle, ever-changing and porous and it works both as a wall and as thin membrane that still allows contamination. ‘Wall’(s) is where Barbara Kapusta’s piece comes to life. The Austrian artist incorporates her writing practice into the structure of space. Her words are about the body, its physical and emotional changes and its orifices. Kapusta is fascinated by the idea of a hole as rupture that allows the exchange between two separate worlds and her wall texts are punctuated by the functional breaks of the architecture: words interact with the electrical sockets or surveillance cameras in the corners of the room and the audience is called to make an effort to decipher their meaning.

Viewers must pay extra attention to connect the dots because meanings abound in Hypersurface. The trilogy used to create the diagram of the show is not an immutable structure. These categories are permeable, erratic, fused or just proximal like the types of surfaces that each work represents. The only certainty emerging from the exhibition is that there is no barrier without a previous or persisting continuity. 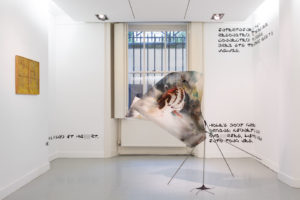 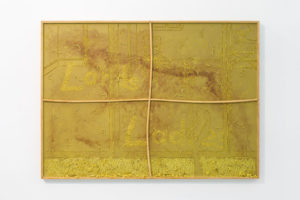 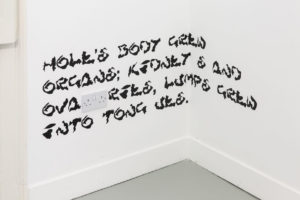 Barbara Kapusta, As Many Holes and Folds as Can Be, 2018 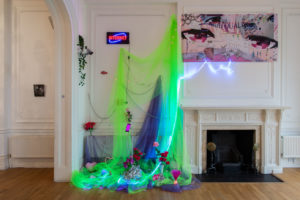 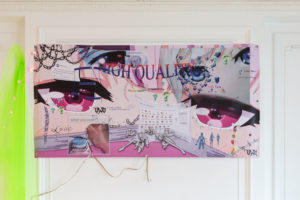 Gianni Lucchesi. Tears in the nature of things