Originally it was darkness: Et..

In conversation with Edoardo T..

Together since 2011, Francesca Leoni and Davide Mastrangelo, aka Vertov Project, have always focused their artistic production on the concept of hybridization and on the varied possibilities of relationship between video art and other creative languages. Entering as artists into the world of experimental audiovisuals, a limbo suspended between niche exhibitions and the internet that the art system struggles to recognize and above all to support, has aroused in them the need to reflect on the potential of video art today and on its ability to renew itself in contamination with other disciplines such as theater, music and performance. This approach, which emphasizes the participatory dimension of an experience in which moving images intersect with live actions in an unrepeatable here and now, led them to found in Forlì Ibrida Festival, the first Italian exhibition dedicated to Intermedia Arts, the fifth edition of which, initially scheduled for last April, has been postponed to mid-September due to the lockdown. The operation, already courageous in itself, of engaging in a project like this in a suburban city with respect to the pulsating contemporary centers in Italy, such as Milan, Turin or even Bologna, which has long shown a certain attention to video and interdisciplinarity thanks to events such as VideoArt YearBook, RoBOt, Live Arts Week or PerAspera Festival, this year faced all the logistical and organizational problems linked to the persistence of the Covid emergency.

But despite the social distancing, the face masks and the obligations linked to the tracking of attendance, Ibrida Festival has not given up on happen live and proposing itself as the beating heart of a recognition in which the performative and spectacular aspect finds nourishment and resonance in critical reflection and in a lively confrontation with the experts. The collaboration with the University and the Academy of Bologna has been consolidated, thanks to the involvement of Silvia Grandi (curator and coordinator of VideoArt YearBook), Piero Deggiovanni (author of the Critical Anthology of Italian Video Art 2010-2020, published by Kaplan) and the researcher Pasquale Fameli. And we too had the pleasure of being involved in the Art magazines talks section together with Matteo Bergamini (director of Exibart) and Elena Giulia Rossi (editorial director of Arshake). After months in which we have all witnessed endless Instagram direct congested by pseudo-soliloquies aimed at indistinct virtual audiences, it was exciting to be able to meet, express doubts, hypothesize new synergies and bring attention to the fact that even the production and the circulation of apparently immaterial works such as video and performance largely depends on practical issues, the solution of which requires a concrete synergy between people and physical places.

After Fabbrica delle Candele, a city multifunctional center where it would have been impossible to comply with the safety standards required by the Covid protocol, Ibrida took place in the institutional Arena San Domenico, where the sacrifice of the convivial dimension of the party that characterized event before, was partially offset by a monumental screen for projections, whose presence made tangible the importance of the installation dimension in the enhancement of video art works, an aspect on which galleries, collectors and museum spaces should consider in the optics of an adequate understanding of this expressive form. To do the honors at the entrance, Vanitas vanitatum, et omia vanitas by Francesca Fini, a multichannel video installation where famous still lifes and portraits, translated into pixels, undergo an ironic process of digital decomposition that reaffirms the Baroque allegory of the transience of beauty and the fragility of the human condition, evoking at the same time all the postmodern anxieties that the dematerialization of image supports implies.

The first protagonist of the Saturday evening was Devis Venturelli, winner of the Alinovi prize in 2019, who investigates the relationship with the contemporary territory by exploring its spaces through mysterious surrealist and sentient forms. In his videos solitary, suburban or historical architectural settings are pushed to the limit by performative or installation interventions generated by off-screen actions or by ephemeral events at the center of the shot. The mini monographic dedicated to him presented his poetics in four short films, which are essential and with impeccable aesthetics. In Monumento (2010), an exorbitant truck engine motionless under the sun becomes a melancholy pseudo-equestrian mausoleum: the only movement is the imperceptible swaying in the wind of the glittery drapery that envelops it, while its breath-roar evokes contrasting sensations of restrained force. Sparring club (2015) documents the dance of some balls thrown into the air against the frescoed background of a seventeenth-century Lombard villa with the accompaniment of a symphony for synthesizers full of melancholy and tension. Sports performance reconverts those decadent rooms into a field of possibilities that are still open, but it also seems to prefigure a latent threat that could at any moment attack the fragility of the plaster. In Pneumotion (2015) the rhythmic artificial insufflation of an infinite concatenation of waste clothes creates a complex expanded body against the abstract background of an urban pavement that alludes with dystopian sound interference to the homologation of mass culture but also to the forced interdependence of individuals who find themselves cohabiting in the same space. Sculpt the motion (2017) shows sumptuous fabric-bodies, made with construction materials used in an incongruous way, which, animated by an artificial wind, advance in fluid decompositions and fortuitous finds. Their hieratic presence interprets the otherness of the non-place that hosts their deeds as if they were an emotional emanation or the last possible aesthetic exhalation, amidst suspicious crackles and phantom lullabies.

This has been followed by the audiovisual concert by Salvatore Insana + E-Cor Ensemble, an introspective journey into the heart of existence that starts from the rain-veiled window of a moving car. In the live, the fractures and interstices of perception amplified by music and images become existential passages in which the infinitely small measures itself against the macrocosm and overlaps it in a variable speed loop. The sky stumbles on the earth to become water in a relentless battle between inside and outside that generates primordial worlds impossible to quantify. 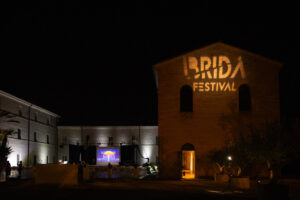 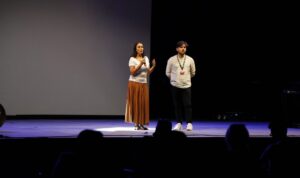 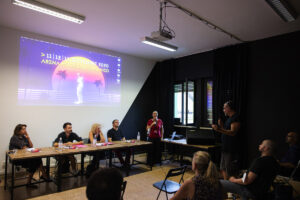 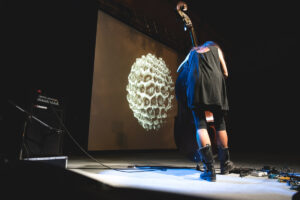 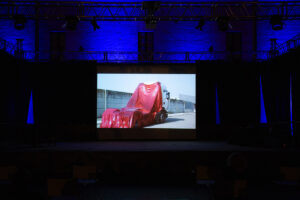 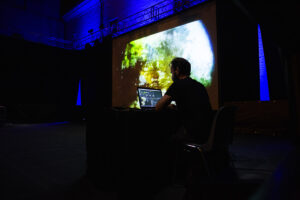 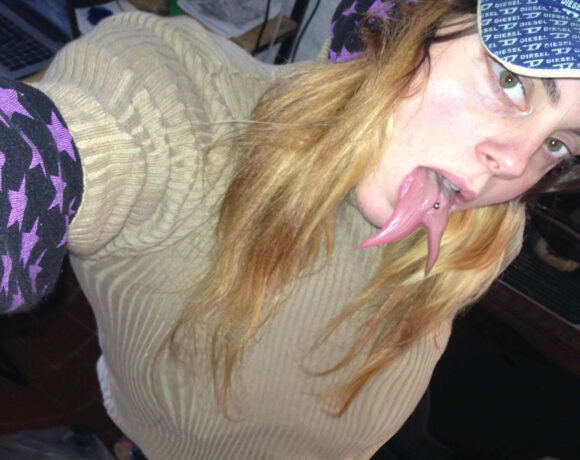 Accelerationist aesthetics and peoples of the Net (V)