The term “icon” was born with a religious meaning and in the Christian tradition it became the symbol of the veneration of God. Nowadays, it is used in different contexts and has assumed new meanings, arousing curiosity even in the contemporary art field. The latter shed new light on the iconoclastic phenomenon, both in the present and in the past.

The Icons exhibition at Boghossian Foundation in Brussels tells, without intending to be exhaustive, the history of the sacralization of an image and how this process is still fascinating for the art world.

In the main hall of Villa Empain the singer Lio is portrayed by the duo Pierre et Gilles in Virgin of Pain in Our Lady with a Wounded Heart (1991) like an effigy to be adored while upstairs the singer Stromae is depicted as a Christ in a mandorla. Wim Delvoye in Untitled (Icon) (2014) – an artwork conceived for an exhibition in Moscow and then rejected by the curator because it was considered blasphemous – opposed traditional religious representation to popular culture, extrapolating and decontextualizing some frames from the “Blurred Lines” video clip by Pharrel Williams and Robin Thicke. Instead, Yan Pei-Ming distances himself from the pop portrait and uses a narrow color palette as in the painting produced for the exhibition and dedicated to Deng Xiaoping, a person who symbolizes freedom and is very dear to the artist. Andy Warhol in the portrait of Queen Beatrix of the Netherlands (1985) depicts one of the four queens who reigned at the time.

Today, everyone or everything could become an icon. Duane Hanson portrays ordinary people engaged in normal activities as in Window Washer (1984), while Annette Messager denounces gender stereotypes relating to women by using in her works techniques or elements associated with the domestic world as in Icon (2013), a black net hanging near the stairs inviting visitors to go upstairs. Ellen Gallagher‘s artistic research focuses on racial identity and stereotypes spread by media. In Pomp-Bang (2003) and eXelento (2004), she modified some cosmetic advertisements on magazines addressed to African-American women, which enhanced the western beauty canons.

Mounir Fatmi works on the desacralization of objects and in the series Presumed innocent (2007-2010) he uses pieces of cables to shape the image of Christ wearing the crown of thorns after the judgment. Titus Kaphar also reflects on the figure of God and wonders what he might look like. In the portarit Created in his Likeness (2020), Christ is covered in black paint, leaving it to the visitors’ imagination to fill the missing part following their own culture. Fabrice Samyn in Burning is shining thinks about the relation between power and icons, displaying a solid wood panel with a layer of gold leaf which was then burned. Michael Craig-Martin in Headphones (2014) represents a large pair of headphones, highlighting how this object is now part of our society and is a symbol at the same time of the isolation and the hyperconnection age in which we are living. In the series The Never Never, Douglas Gordon placed a photo of his right arm, tattooed with the word “forever” in black and mirrored another photo beside this with the same word tattooed on his left arm, but written in white and in reverse: where does the truth end in this representation?

Iconoclasm is a research on the deepening nature of an image and the way the visitors interact with it. In The White Lady (1953) by Octave Landuyt, the characters are represented with simplified volumes and in fixed poses, while with Head (1993-1994) the Syrian artist Marwan highlights the relation between earth and identity, transforming the portrait into an abstract landscape. Arnulf Rainer in Untitled (1992), with a play of overlapping, paints different time crosses trying to find a perfection that does not exist. For more than thirty years, Sarki has been carrying on his IKON series, frames gathered in ages that the Armenian artist has reworked with watercolors, questioning the idea of sacredness.

The exhibition ends with Dasani (2020) by Bertrand Lavier, an aluminum plate strewn with translucent acrylic gel, an allegory of an even elusive and hidden truth: the title refers to Coca-Cola’s unsuccessful attempt to launch a new still water brand in England.

The works in Icons – like sacred icons – become images able to build a bridge between the visitors and another dimension and become tools of reflection on how media today and in the past represent the world and its beliefs. 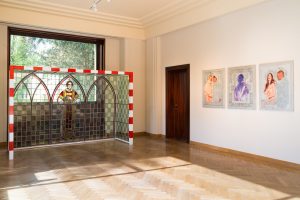 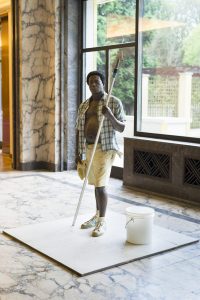 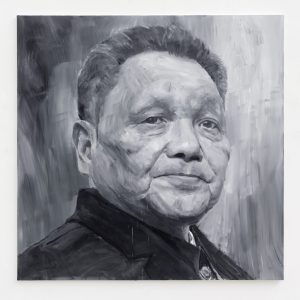