Time and memory, history and e..

Mirko Rajnar’s thoughts and wo..

Paolo Simonazzi has developed the Il filo e il fiume (The thread and the river) project as a journey through time. His journey along the Po river, and in the territories it crosses, began in 2013, drawing on the visual sources of a poetic imaginary, calmly changing.

The river thread, in his objective, is transformed into an instrument capable of acting as a unit of measurement that stitches and brings together local geographic elements, which today trudge limply trying to emerge from the vast glocal shoals.

The Italian landscapes are enveloped with a vein of nostalgia that pours into the choice of the cut with which the chosen subject is immortalized.

With a Sprighsteenian proceeding on the road, or it would be appropriate to say on the river, the author comes into contact with the realities of the places he visits, removing from view the waters of the great protagonist: the river. The Po rarely appears in its entirety, but leaves room for human life that circulates around it, revealing from the bottom the identity that owes their characteristics and peculiarities to the river.

Critical analyzes fail to fathom all the mysteries of his images: how does Simonazzi make things important? Why does the artificial night light falling through the fog on the boats turn into an event? Why does an empty restaurant room following a lunch catch the eye as if it were a small unexpected waterfall?

With a sense of silence, detachment, in a static and peaceful dimension, the artist makes the particular universal, since no place is empty and no state of mind is so banal as not to deserve an interpretation.

An old disused kitchen, abandoned between a meadow and a field, a smiling elderly lady surrounded by lush vegetation, a gash in a fence covered with dry vines, three goldfish in an aquarium crossed by electric wires, picturesque sheets hung out to dry on a little sunny day …

Simonazzi draws constant stimuli from everything that others consider with indifference or avoid.

What makes these works not ephemeral is the fact that they are not simple representations of landscapes, but the expression of Simonazzi’s thoughts, of his feelings for certain places, for the people he meets and for the things he visits, touches, observes. The light, although a sober presence of grace that does not invade the stage of the event, permeates everything, being part of it and giving life.

Simonazzi is a great photographer, aware of the social and historical role he occupies there on the edge, on that nostalgic, at times metaphysical thread, of an Italy which is not very aware of itself, of its small realities which, together, constitute his soul. 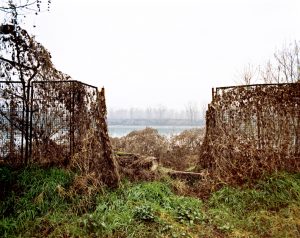 Paolo Simonazzi, Boretto (RE), 2016, courtesy of the artist 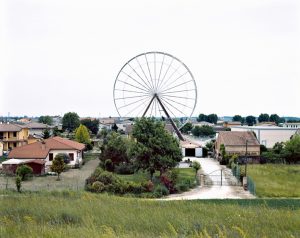 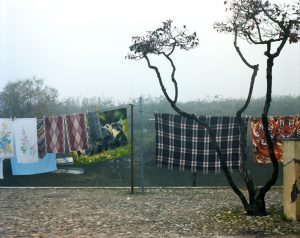