We, Humans. Between art and AI..

Imbroglio (or the ability to incorporate possibili...

Imbroglio (or the ability to incorporate possibilities): a path between primitive and futuristic

Naomi Gilon, Nona Inescu, Lucia Leuci and Lito Kattou confront each other in the spaces of Like a Little Disaster in Polignano a Mare on the theme of overcoming the human, not only winking at a sci-fi expansion of its possibilities, but also returning to the primordial cell, until it ends in the monstrous archetypal.

In the report by Marco Pinna “The cyborg of the lower Modena area” (published in the volume Ultra Men in CTRL Magazine) he talks about trans-humanism and a future in which, through the hybridization between man and technology, it will be possible to live forever, one will be able to overcome the limits of the body and reach a level of knowledge close to infinity – the dream of Faust.

Nowadays we can already alter reality, “incorporating” a microchip under the skin to extend our memory to an extraneous, but almost invisible device.

Something similar happens from 27/04 to 20/06/2019 in the exhibition “Imbroglio (or the ability to incorporate possibilities)” which, as in all labyrinthine paths, can be read in two directions.

You can start the visit from the space bodies created by Lito Kattou (Nicosia, 1990), which cancels the physicality, creating impalpable humanoids whose limbs alternate crushing phases with phases of lifting from the ground through magnetic forces. The feline scratch with which they are marked shows an ambiguity between the visual laceration and the decoration of the embroidery, between hand-making and the advent of robotics.

Or you can let yourself be captured by the inhuman hands of Naomi Gilon (Arlon, 1996), who returns to myth and fable, passing from the orality of a story implied by the tactile dimension of ceramics worked according to tradition. In her picnic baskets victim and executioner overlap in the deception of the forest, in which one perceives the absence of those who stop every day to collect a bouquet of flowers. The underground presences of creatures transformed by time, who embody fear and bewitch their fascination, return a little further on in the form of interrogative hands.

The works of the artists give life to continuous waste, also present among the carrot pickers by Lucia Leuci (Bisceglie, 1977). These are “upside down” beings who make singular appearances in their attempt to return to the low. Yet their prostheses – in which the natural meets the artificial – and their dresses suspended in the void do not allow these figures to enter the earth, leaving them in a limbo of ethereal poetry.

The human body can only be seen in the video “Vestigial Structures” by Nona Inescu (Bucharest, 1991), which does not resist the body-mod temptation to let you penetrate external elements, in this case natural. The identification between man and landscape manifests itself in the alternation between frames. At one of the most imposing and ancient megalithic monuments in the world, the alignment of Carnac, scenes of physical exercise happen, in which to the parts of the body are applied prostheses of stones. The evocative subtitles of the video, taken from Jacquetta Hawkes’s text A Land, reveal the primitive fusion between the rock and the human.

“Imbroglio (or the ability to incorporate possibilities)” is a continuous path forward and backward in history, in search of roots that forcefully ask to get out of the ground and become aerial, that turn into transhuman hands capable of scratching , asking, clinging, but also ready to open up, offer, welcome. 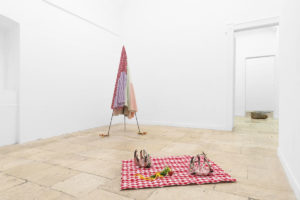 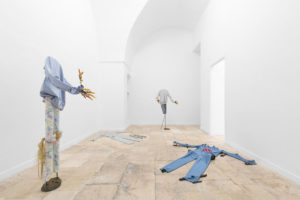 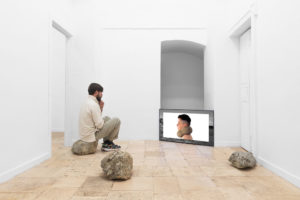 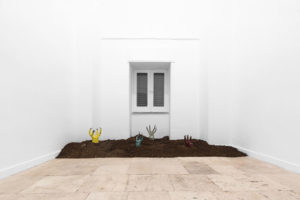