We talk about it with Antonio Addamiano, owner of the Dep Art Gallery to understand how the desire to bring this painter on stage was born.

Imi Knoebel has always been an artist in whom I have a deep interest and esteem. His unique language, his way of approaching the work and making it fully live in the space in which it is placed are important elements that restore, at least in part, the centrality of an artist like Knoebel within contemporary art. Moreover, his notoriety is not accidental: in decades of career he has become the protagonist of exhibitions and projects that have made him one of the cornerstones of minimalism and constructivism at an international level, and I think it is very interesting to note how many others, consciously or not, can do nothing but “cross it”, placing themselves in close dialogue with him, with his forms and his chromatic interventions. He is an artist of excellent quality, who has been able to transform himself over the years, always remaining faithful to himself, to his painting and to the roots in which the culture of which he has become one of the greatest exponents sinks.

Now we interface with Giorgio Verzotti, curator of the exhibition. Imi Knoebel was trained at the Düsseldorf school and his rigorous imprint is preponderant in all of his more mature works; but there is always a “disturbing” element or, better, a revelation, an “imprecision” desired and studied by the artist who shows the medium. Do you think that somehow having Joseph Beuys as a teacher has a bearing on this choice? And then, can you tell us about the presence of your friend Imi Giese in this exhibition?

The bond that unites Joseph Beuys to Imi Knoebel can only be evident for factors that go beyond mere biography. Knoebel was a student of Beuys at the Kunstakademie in Düsseldorf, but it is equally important to remember the strong sense of innovation, change and the conversations that every artistic practice of the time entailed. It was a period of strong questioning, of the will to experiment and find his own form of art that he was able to fully represent not only what he brings with him but also the complex dynamics of an increasingly cosmopolitan society. If we talk about art as an expression of social action, certainly Knoebel has also taken paths that should not be forgotten, among all the stained glass windows of the cathedral of Reims and the Kinderstern cycle, whose proceeds were donated to the most needy children. Obviously there is much more, but as far as the artistic component is concerned, I believe that Imi Knoebel never turns his back on any of the masters who made him the artist he is today and, like several artists of his time, while remaining faithful to his own artistic practice, he has the unique ability to insert fragments of his own experience into works that, apparently, have sharp features and very little to “whisper”. Instead, walking through the exhibition, one realizes how much his works are often an expression of a desire to seek wonder in the eyes of those who can observe. I think the same applies to the cycles he dedicates to people who have left an indelible mark on him as a man and, consequently, on Imi Knoebel as an artist. The cycles Anima Mundi, Lueb Go and Messerschnitt have assumed not only an artistic value, but also a personal one for Knoebel. In particular, he formed a unique artistic partnership with Imi Giese, to the point that the two began to be called “Imi und Imi”, a nickname that still accompanies the German artist today.

How would you define the influence Malevich had on Knoebel’s work? And in which traits, in your opinion, is it possible to see the influence of the ZERO group and more particularly of Fontana, Manzoni and Klein in the author’s works?

Kazimir Malevich is undoubtedly one of his points of reference, and how could it be otherwise? In the works of the Soviet artist of Polish origins there is already everything: the form, the presence in space, the minimalism that will distinguish the evolution of Knoebel and many others with him, who have been able to critically look at Suprematism and to the avant-garde phenomenon. Precisely this relating, combined with the desire to recognize himself in the different expressions of his contemporaries, meant that Imi Knoebel could relate to the great avant-gardes from the second half of the twentieth century, paying homage to them with explicit and clear references. Interestingly, in any case, the fact remains that it is not a mere influence – since many were influenced by Lucio Fontana, Piero Manzoni and Yves Klein – but a real self-affirmation within a broader current, which leads with itself correlations and cross-references. In addition, on display there are works representing almost every cycle with which Imi Knoebel has questioned himself over the last forty years. It is important to remember how Imi Knoebel has been a protagonist since 1968 in prestigious international contexts (as evidenced by the participations in Documenta), with works such as: Raum19 (1968), Schwarzes Kreus (1968), 250,000 Zeichnungen (1969-1973 / 5) and Projektion 3 (1968-1971). 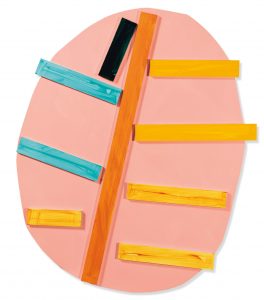 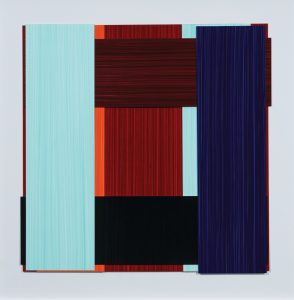 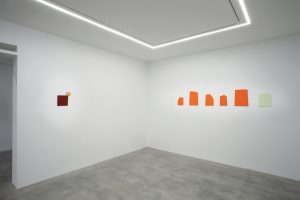 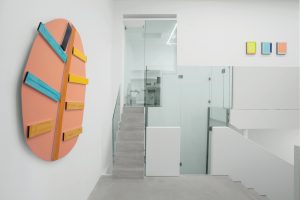