Paolo Ciregia. God is dead but..

In conversation with Ruggero Maggi

In conversation with Ruggero Maggi

The artistic life of Ruggero Maggi was shaped by the curiosity of the surrounding world. When he was 22 years old he opened a multimedia art gallery: the Milan Art Center. Research, experimentation, neon, laser, holography, the unconscious encounter with Visual Poetry, artist books and the incredible world of Mail Art were his interests in those years.

If I think about your story I see three important paths that intersect in the guise of author and promoter: the first way is undoubtedly your long relationship with Restany…
I met Pierre in the 1970s. I accompanied a Florentine artist, a friend of mine, who, having an appointment with Restany, but not knowing Milan, asked me to accompany him to the Hotel Manzoni, in fact Pierre’s Milanese residence. After seeing the documentation brought by the artist and intrigued by my presence, I told him that I had just returned from a trip to Peru and that I had recently been in the Peruvian Amazon. Amazonia was the magic word that triggered an immediate spiritual contact: he too was a great lover and connoisseur of the Amazon forest and its world. Since then we met numerous times and always, immediately, the memory of that common love that deeply linked us was triggered. When, about ten years ago, I asked him for the first time if he could or wanted to write something about my work, he had no hesitation and the result was the text More true than Nature which proved to be fundamental for my research. After his death I thought I would pay him homage with a project not only dedicated to him, but focused on him: “Camera 312 – reminder for Pierre” also presented at the 2007 Venice Biennale within a space where the walls were surrounded by fluctuating yellow Post-it and where the original decor of Room 312 of the Hotel Manzoni (where Pierre stayed for over thirty years) was also exhibited.

The second nodal point of your artistic path is centered on mail art and small artist publishing…
Postal Art has been with me since 1975. Mail Art is not just a trivial exchange of letters or postcards, but has always been an explosive example of creativity. Postal Art has been and still is a wonderful adventure for me! In 1975 I also started working on small objects to which I gave the form of books… pages like works of art, pages that do not flip through and set in time. In the same period I also founded a particular Non solo libri archive / library which collects more than a thousand monotypes made by artists from all over the world.

Finally the project of the Tibet Pavilion, the last and current node of your artistic adventure…
Tibet Pavilion is an idea of 2010: since then it represents a bridge between cultures, between western contemporary art and Tibetan iconography. A project born to not forget a millenary culture that China would like to destroy… to give back to Tibet the dignity of a nation of law. The combination of two simple words: “Pavilion” and “Tibet” which, on the occasion of the Venice Biennale, take on a particular meaning of geo-political identity, making Tibet an autonomous country utopically. I like to think of the Tibet Pavilion as a dream that has left its mark but, as Kubrick said, dreams are never just dreams.

Let’s talk about your research on the Chaos theory…
I started to get interested in the theory of Chaos already in the 80s and in ‘98 I created and organized what I believe can be considered the first real contemporary art event dedicated to this topic: Italian Chaos simultaneously with specific sections in three Milanese galleries. Allow me a quote from Brother Fractal which I wrote for that occasion: “The chaos goes beyond the purely physical conformation of our life and pervades the human consciousness itself, to regulate, in a series of apparently random events, the whole existence. Our life itself could therefore be considered a very complex fractal scheme expanding both physically and metaphysically, both temporal and spatial”. We can represent this space-time evolution as a life-line that propagates on different levels, on various possible existential layers (for example in the film Sliding doors), as a fracture on a glass plate or in an arid terrain.

Can you tell us something about your installations with laser and neon?
I have always considered light as a primary element of research, as a real material-source of structures, patterns, signs and lines. In the early 1970s the tests with the neon light that I brought to the hard rock of the Val Camonica engravings or to the fibrous substance of the wood, and then the laser that touches and reads the roughness of the materials and the studies on interferometry that brought me to the holography with the first 3D films made in ‘79.

And what about the wood light, also used at the GAM in Gallarate?
In 2006 I was invited by Emma Zanella, at that time director of the GAM of Gallarate (now MAGA), to carry out a site-specific installation that had irony, word use and image. It was a very special and intense period: immersed in the shadows of the museum, working with the only wood that radiated the space of an unreal, metaphysical light, I undertook to paint directly on the walls of the museum with a special fluorescent paint (but transparent to normal light ) signs that otherwise would not have been perceived by the eye. It was a unique experience. Emma wrote about the presentation of the catalog: “And here is Underwood, a multi-sensorial environment where the light of wood allows to go beyond nothing, to overcome absence and to discover the under wood, the undergrowth, what is not seen immediately but that it exists, it exists, it is very present”.

Projects for 2020?
For 2020, in addition to projects in progress (for me “the art is the project”), I foresee the publication of a monograph, the restyling of my sites and the reorganization of my archives. 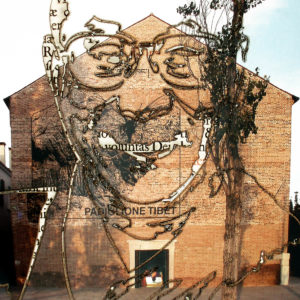 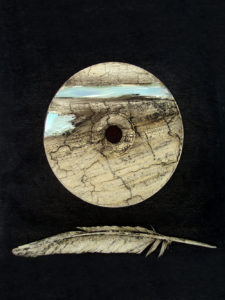