The eye, the eye and the ear is the title of the first Italian solo show of the young American artist Trisha Baga (Venice, Florida 1985) at Pirelli Hangar Bicocca: she is considered one of the most promising video maker of her generation. The exhibition includes five video installations alongside ceramics and the so-called Seed Paintings, made with sesame seeds. Her poetic is majorly focused on the multi-layer sensoriality triggered by the encounter between artworks and the viewer, who almost manages to reconcile his/her body with the artist’s material, eventually seen as a fragmented prosthesis rather than a cold medium of our times. In There is no “I” in Trisha (2005-2007 / 2020) the lingua franca of television and sit-com becomes equally organic and synthetic, and so the ceramics, characterized by an evident “fingery” touch. At the end, the work that best contains the whole artist’s poetics, between technomaterialism and xenofeminism, is the one called Mollusca & The Pelvic Floor (2018). This multifaceted installation unfolds on two main narratives: the evolutionary path of molluscs, and the interspecies relationship between Baga and “Mollusca”, the homophone pseudonym used by the artist to call her artificial intelligence screen name (developed by Amazon and marketed under Alexa’s name), consisting of two simultaneous projections – one in 2D, the other in 3D. If Pipilotti Rist said “we all come from between our mother’s legs” now artworks speculate on some “hypothetical ancestral mollusc”. Here’s a conversation with her.

How did Milan welcome you? How did you relate to the spaces of Pirelli HangarBicocca?
The Hangar is enormous and belongs to a scale larger than that of a human. In some ways, when I first entered it, it felt like an enclosed outdoor space, and because of the lack of admission fees, an indoor public park. Parks have a way of relating to a wide diversity of scale sensibilities, because of the diversity of organisms that occupy them. Snails, bears, redwoods, foxes, fungus, etc. To an extent, I wanted my show to do something similar: simultaneously express spacial understandings ranging from that of an iPhone, to that of a New York apartment, to that of a cosmic system.

What relationship do you wish to establish between visitors and your works within the space?
The exhibition begins with a text that begins “This is a reproduction of a man published before 1923. This man may have occasional imperfections such as missing or blurred pages, errant marks, etc.” The original text comes from the preface of a book, as a disclaimer for the side effects of Optical Character Recognition technology, but I substituted the word “book” for “man,” and all the pronouns to “her”. So from the beginning, I established the exhibition as a reproduced organism, and the idea of the human as a spliced document. Upon entry, the exhibition resembles that of a natural history museum, but looking at an evolutionary history of media technology, rather than that of a biological species. The show is, ultimately, a science fiction, and I wanted the space to feel like a mutating ecosystem that the visitor participates in, simply through their attention and presence.

How important is the memory of objects settled in the materials you recover for your works? And how much does the relocation of them in a museum context change it?
It depends on which objects you are referring to. Ceramics as a material naturally refers to vessels and archaeology, and I try to extend that metaphor to the science fiction notion of the vessel, like the body as vessel, or a vehicle, for an intelligent life form. In the case of this show, some of the ceramics are occupied by Amazon Alexas, the domestic mass-produced artificial intelligence device. Alexas are very sensitive to their environment. For example, the Alexas I’ve used in installations of “Mollusca and the Pelvic Floor” are crazy about Adele because when they are active, the installation asks them to play Adele once every 35 minutes. In terms of the more complex video installations, because of the works’ inherent and layered framing devices, the “museum context” seems almost incidental.

How much is your art affected by the one of the last century? I am thinking about the video art pioneers and about Stuart Sherman’s singular investigations…
While very grateful for doors that have been opened by artists of previous generations— beloved favourites include Joan Jonas, Stuart Sherman, Shigeko Kubota, Laurie Anderson, Fischli and Weiss, Claes Oldenburg— I wouldn’t say my work has been affected by them. To be honest, I am a bit out of touch with art history and prefer to access it through and secondary to the fact of making art and engaging with an art community. While there is a lot of research in my process, very little of it is related to art; in fact, I actively avoid it in research stages. It would make me feel selfconscious. Perhaps the work from the last century that has formally influenced me the most is the films of Robert Altman, especially his sound compositions.

How much does your versatility as an artist reflect post-modern identity/non-identity?
My identity as a lesbo Filipino American is actually really important to my work. we are all flawed mechanisms through which images pass through, and my identity forms the lens through which I see the world. It is important to look at these lenses. That said, Filipino culture, because of its extensive history of colonization and dearth of archeological research, can appear to lack identifying features. It instead wears fragments of the mythologies of its colonizers’ cultures and composites them into something else entirely.

What are your next projects?
Because of coronavirus, now is a weird time to be thinking about the future. I have a show scheduled at societe Berlin in June, but I’ll believe it when I see it. The news leaves me exhausted of the screen, usually the primary site of my practice, so I’ve shifted to a “post electric” practice, painting and playing acoustic guitar. I tend to do this intermittently when my mood is extra apocalyptic, but this looks like it will be by far the longest stretch yet. Luckily my studio is easy to safely access. My quarantine family started a painting club and I’ve been adapting theater exercises to find compositions. 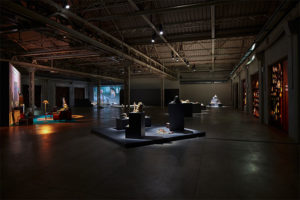 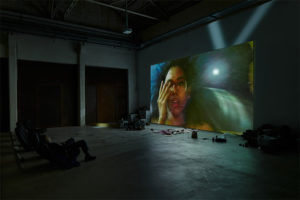 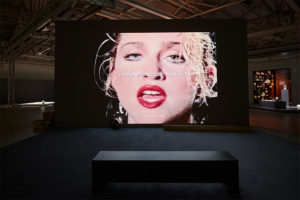 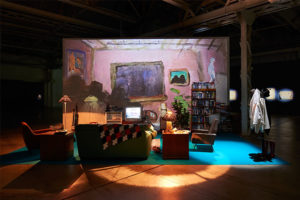 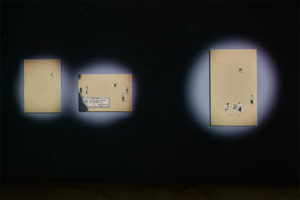