In conversation with Uffe Isolotto: visionary and ...

We walked the Earth is a powerful visual narrative with theatrical references, conceived by the multidisciplinary artist, Uffe Isolotto (born in 1976), for the Danish Pavilion for this 2022 Art Biennale. It must be said, right from the start, that something new and different takes place inside this pavilion curated by Jacob Lillemose because one feels introduced, without any mediation, into a traditional Danish farm and then finds oneself at the center of a dramatic story, belonging to a family of centaurs, in a mix of archaicism and metaphysical – science fiction momentum. A story with tragic connotations, in which a centaur woman, created with an incisive and impressive hyper-realistic sculptural trait, is giving birth to a son but in the next room her centaur husband has just hanged himself. With these hyper-realistic sculptures, Uffe Isolotto takes visitors «into the disturbing drama of life and death». There is death that hangs from the gaze of her centaur husband and is present in a more unsettling way than the life that is about to be born. There are also no other myths to appeal to since the centaur itself is a mythological creature, borrowed from the Greek imagination, but it could also be the result of biotechnological acquisitions. But, here, through his words, we enter a further reflection – thanks to his willingness to be interviewed – on the ruthless cruelty of our time, on death and on the processes of change, crucial themes of his artistic research. 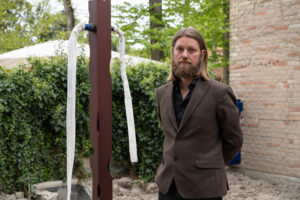 Your narrative vision for the Denmark Pavilion is shocking. It seems, apparently, that there is no more hope because even the myths, the symbols are dead in the world. In reality, with this idea of death, you have powerfully recreated a process of “catharsis” in the spectator. You have brought the tragedy, typical of Greek theater, into the terrain of the visual arts. Thus, in those who see the death of the centaur there may be, perhaps, a possibility of salvation. Tell me something about your idea of death and the message – cathartic for me – that you deliver in the mind of the viewer.
In the exhibition We Walked the Earth you encounter both the shock of the real and the unreal at the same time. Something that looks so real that you question your senses, but at the same time also clearly is a symbol. This is true for the centaurs, but also for the rest of the installation. I wanted to create a scene that circumvented the analytical mind and would throw you head first into your own emotions, but also opened up allegorical perspectives through the narrative. Death is present in the scene, but there are ambiguities, maybe even hope. The hanged centaur is definitely dead, but is the female centaur dead or just resting before the last contraction, which will give life to the centaur foal? Or is it stillborn? We’re rooting for whatever version we need, and I think that is where the possibility for an individual catharsis is. This is echoed by the catharsis we all need on a bigger scale. The work I created is no more shocking than the events taking place in the world today. The tragedy on display might even be quite lame compared to the absurd tragedy of the state of the world, but it is through the staging of this tragedy that we can channel our emotions and connect to our feelings. Even if they might be contradictory or hard to verbalise. And this makes way for a possible salvation, an understanding that is beyond reason. And to me that is where the hope is. 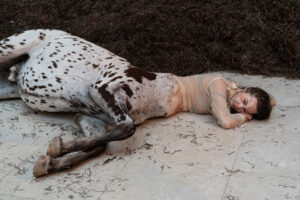 In your artistic research, there are no boundaries. Indeed, you make continuous references to philosophy, to the “post organic body”, to technology, to the concept of narration, almost filmic. Can you tell me, what is the role of contemporary art and your concept of multidisciplinarity in art?
I am very inspired by worldbuilding as a method to create worlds within which narratives take place. For this project I wrote an origin story for the centaurs, which was only meant as a tool to get things started, but I see a future for worldbuilding in contemporary art. Instead of throwing yourself at the feet of the art market, feeding the world one object at the time, worldbuilding is closer to how many artists work. Worlds are all around us and will be important in this century. We talk about going to other worlds or imagining another world where we live. Movies, literature and computer games have already created these spheres for years, so why not contemporary art? Creating a whole world can be a bit much for one person, so it makes sense to get out of your head and start working with other people with other skills than you. For We Walked the Earth I had the chance to work with a lot of very skilled craftspeople and artists – furniture designers, fashion designers, special effects make-up artists, taxidermists, set painters, a glass artist, model maker and a graphic designer – and I picked them all based on their artistic inclinations and the chemistry between us. I wanted this projects to not only be succesful in terms of projecting my own ideas, but also to be a meaningful and fulfilling experience to the people I work with. 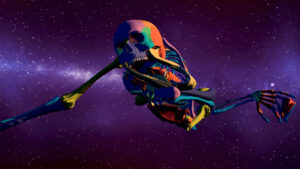 Can you let me know if you are already working on another project, in which the concept of death and transformation returns? Can you tell me something about it?
Very early on I realised that this project was probably something that I had to deal with for quite some time, also after the biennale in Venice, so I decided that it could develop into other projects. I have made agreements to show the work in three art institutions next year, and each iteration is going to be different. I will show the work in Copenhagen, at Den Frie Centre for Contemporary Art during summer 2023, and I will add a number of new sculptures to this exhibition, but I will also leave out some parts that do not fit the architecture of Den Frie. The drama of the centaurs is essential to the work, but the atmosphere of the setting is equally important, and this is where I can develop the existing artwork work with new layers of interpretations and emotions. 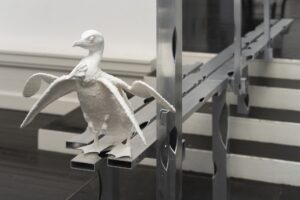 I believe that artists like you today have the urge to heal the soul of the world. What do you think about this world and how is the mind changing?
I’m flattered that you think so, but it’s also a burdensome weight to bear. I am new to being so much in the public eye, but I am beginning to adjust to the public interest and the responsibility of putting strong images out there, for so many to see. The response has been overwhelmingly positive, with only a very few expected negative reactions, and I am so thankful for all the love and the extent that people have engaged with the artwork. This is inducing me with hope and the feeling that people are not looking for easy answers to complex situations, but rather want to experience art which is mirroring the complexity of being alive. I think there is a large amount of silent voices out there, who are tired of the dull dichotomy of the world and want to talk about things in a different way. Maybe I’m just projecting my own aspirations, but from the response I got, I sense that there is a future audience for these kinds of works. 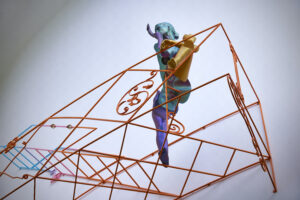 In closing, I ask for your point of view on duality. We are always in dual processes: life-death; fiction-reality; nature-technology, soul-body; virtule world-real world… Is this duality a limit or a possibility of investigation into our existence?
In We Walked the Earth there are some quite obvious dualities at work and that might be part of the answer to the centaurs’ demise. It’s like they are trying to get away from biology by becoming these mythological characters, but they are not able to deal with the trauma from the effect of that wish. Dualities are created by humans to better grasp the world, but it’s an inherited perspective that is battling with reality. We don’t have day or night, but we have a long repetitive continuation of light and darkness, caused by the earth’s rotation. I have always been fond of the grey zones, be it dusk, dawn or hybrid beings, because that is where we question the duality. Visiting the Denmark Pavilion during the last seven months has been an ever-changing experience. The light conditions has changed from the stark, warm light of summer to the pale blue light and total darkness of autumn and winter. The golden light squares from grimey windows slowly traveling across a wall and over the body of a hanging centaur.