In dialogue with the history of art. At Palazzo Fa...

In dialogue with the history of art. At Palazzo Fava on display “Sfregi” by Nicola Samorì

Nicola Samorì from Forlì returns to his home town with a personal exhibition at Palazzo Fava, an anthology of about 80 works of painting and sculpture, curated by Alberto Zanchetta and Chiara Stefani. The exhibition itinerary was conceived in close dialogue with the rooms of Palazzo Fava: the artist listened to the “friezes” on the ceilings, painted by great artists from the past, such as the Carracci and some works from the Carisbo foundation, like Canova’s Penitent Magdalene and the “Anatomical Garden”. It is the very meaning of life, the mysterious link between life and death, between creating and undoing, that emerges from Samorì’s work; a silent meditation on art, on color, on the material from which a powerful expressive force is released, a need for dialogue, comparison, continuation and innovation of the pictorial and artistic tradition, with which he is always in contact.

It is precisely starting from the comparison with the statue of Apollo present in a room of the palace, that Samorì begins his journey, bringing attention to the myth of Marsyas, who had tried to challenge Apollo. The wooden sculpture proposed by the artist rises upwards, transmitting the pain and suffering of the torture experienced, like the works centered on the theme of the skinned body, of which the main protagonists are Christian Saints, to which the artist adds a further martyrdom compared to that reported by the hagiographic tradition. The skinned skin is transformed into filaments which, detaching themselves from the painting, remain an integral part of the work: in fact, Samorì’s technique provides that he, after having perfectly created the work, rubs it, giving it a new meaning, an artistic meaning and vital, mysterious and indecipherable.

As the artist states in an interview with him: “I whip the painting to see it bleed, because I consider it like a body that is treated like an anemic organism, while it is not at all. The images and their narration are functional to this staging that needs the metaphor of the flesh to make itself unequivocal[1]”. This is expressed through double references to the history of art in an ancient and contemporary key: to Baroque painting, on the one hand, in particular to the Spanish one and to the encounter with Crespi, which provide the expressive pictorial means, the use of colors, the profound study of light, of bodies, of flesh, to the informal on the other, which is revived through a material use of painting, which disfigures the work by overlapping the layers of different materials.

Art, therefore, remains and is immortal, it continues to live beyond time, beyond the artist, beyond scarring. But the dialogue continues and in the Sala delle Grottesche we find the monumental fresco “Malafonte”, which seems predestined for that location, embedded in the supporting structure of Palazzo Fava. The miracles during the exodus from Egypt are represented through a figurative contrast, which emphasizes the relationship between good and evil. A path of “elective affinity” that reaches the apex of pathos in the room where there is the conversation between the friezes by Carracci, the works of Samorì and the Penitent Magdalene by Canova, which placed in the center of the room, recalls from above the viewer’s gaze downwards, then led to the view of the large triptych placed in front of the sculpture, full of references to the “Last Judgment” by Luca da Leiden.

On the second floor there are works of different formats and artistic techniques, such as stone painting and portraits with blinded eyes, in dialogue with the blind women by Annibale Carracci. The “San Rocco” recalls the painting of Jusepe de Ribera, where, as claimed by the curators, the informal preformed material remakes the iconographic subject. In painting, the elimination of physical details, such as in the “San Sebastian” and in the sculpture, the subtraction of the stone, represent the absence of flesh; the works cannibalize themselves, feeding on themselves. The sacredness that emanates from the “deposed Christ” refers to the Catholic and religious tradition. Starting from concepts known and known to many, the artist emphasizes the sense of mystery, immortality and continuity of art, in communication with the artistic tradition and contemporaneity of today. 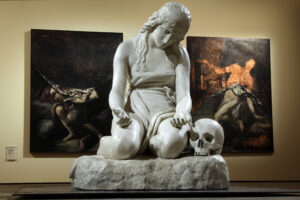 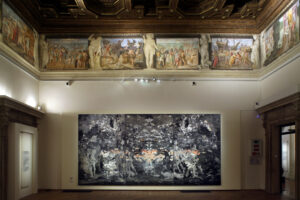 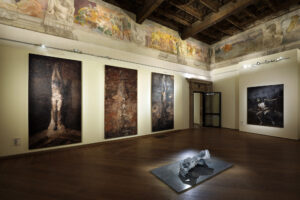 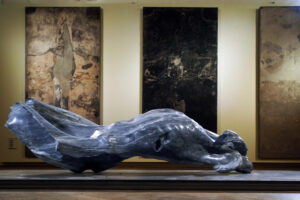 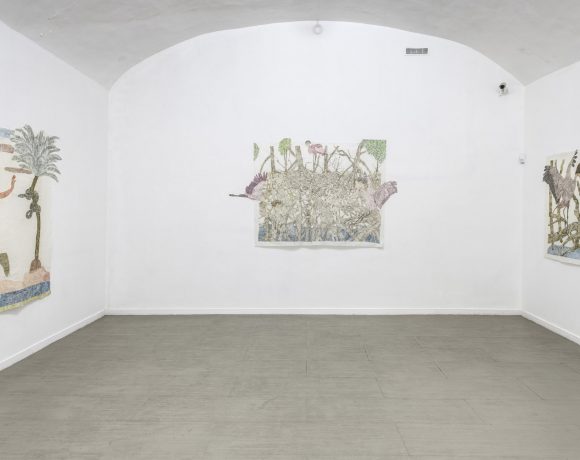 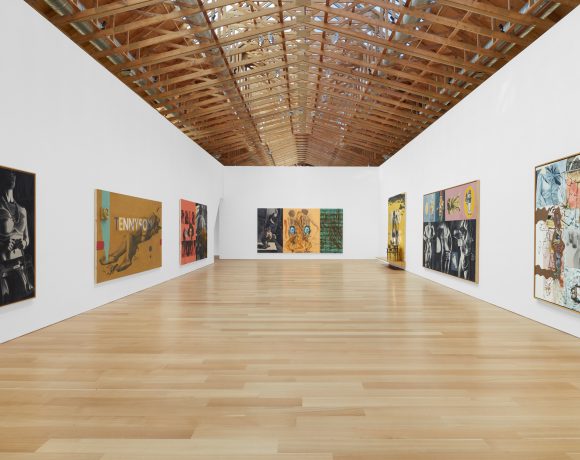 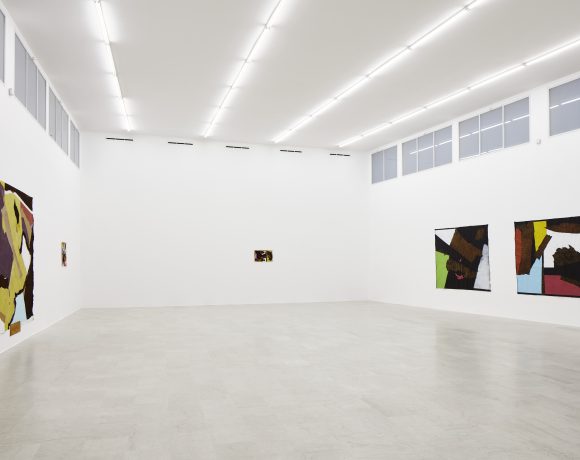