A new cultural space with the ..

The procedural method that characterizes Giulia Napoleone’s work is not a banal visual and formal erudition, but a strong and invisible anchor chained to the cartographic features of her works, which declares a depth of thought.

The proof is the artist’s success in the numerous gallery, fair and museum exhibitions, among a varied audience. In its immediacy, the exhibition Nero di China curated by Bruno Corà, proposed by the Galleria Il Ponte in Florence, until 20 March 2020, has the pride of supporting an almost exclusively wall use, an invitation to a meditative reading for each work-poster. Legitur ergo est.

The comparison between painting and writing has illustrious precedents and current promoters of undoubted character, yet Giulia Napoleone manages to distinguish herself with acute prowess thanks to, at least, two significant elements: manual practice and landscape inclination. On the first, the rhythmic narration of the work is quite evident, which the shrewd Corà approaches Opalka[1] with which, moreover, Giulia Napoleone shares a past as an engraver that is anything but negligible, as it is precisely from the ritual constancy implicit in this technique that both the artists derive the course, the mantra, proper to their work.

Less obvious, although already present in long-standing productions[2], is the naturalistic dimension of the author from Abruzzo; the minimal shapes always bear a reference to traces and environmental signs, attributable to a perceptive graphic style or a natural gesture. The capillary river or mountain lines, the star trails and even the characteristic pearly have an implication with the outside world, which Napoleone translates into a personal and universal language at the same time.

Contrary to international counterparts, the Italian minimalists convey a more intimate and warm thought, inevitably offered by the consequences of working in contact with one of the most important historical-artistic areas of the planet: it will be enough, not to stumble in rhetoric, to remember the Grand Tour centuries to clarify the bio-rhythmic peculiarity enjoyed in the Bel Paese, still vibrant despite the newspapers and concrete. Light is a further eminent element in Napoleon’s painting, finely illustrated in its essence, a Chemical Realism would be to be enunciated[3].

With regard to the Florentine exhibition, the monotony of duotone is averted by the formal and structural variety, but above all by the significant value assumed by each individual piece: there is no way, everything is the result of a certain emotional and phenomenological moment (the light is not never the same), as the temporal and optical impact that comes out of all the works on display, the handfuls of hours and days, drop by drop of ink, is not avoided.

The poetic-literary threshold is crossed several times, creating a pleasant metafigurative dichotomy, explicit in the artist books Les Rehauts du Songe (2017) and Olympia (2019), both for the Editions Al Manar, with the poems by Yves Peyré and Luigia Sorrentino: the graphic and typographic signs follow one another in a dark waltz, prey to an ocular vortex of reading and figure, leaving the right observer to breathe the cards.

There is, indeed, an inviting and discreet plastic force, more suited to the touch than to the “grip”, in the painter’s paintings, however elusive, wild force, just like a landscape, cannot be harnessed.

[2] Since the 1960s, Napoleon’s research has focused on “representing light” almost in mimetic form, capturing the element’s dust image, its environmental purity; the Mutano i cieli series (2002) is further confirmation of the naturalistic character of her work.

[3] Overcoming Alchemy, it has been noted that different currents of the twentieth century, in particular Magic Realism, find in chemical science the ideal fulcrum between reality and the invisible world, to be drawn on to “give phosphorus” to the distinct expressive manifestations. 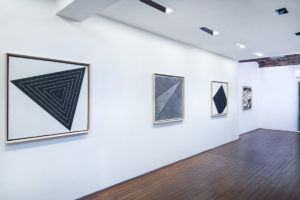 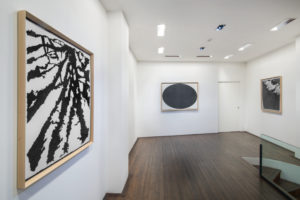 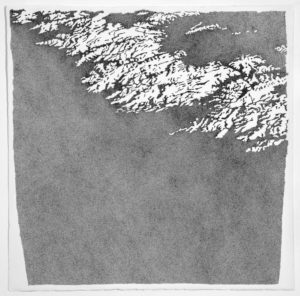 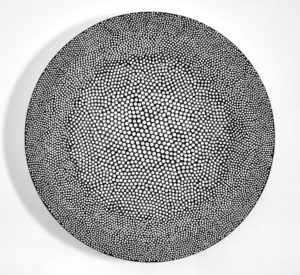