Tales from the inside_out: the..

After a period in which the uncertainties related to the management of the pandemic forced the MAMbo – Museum of Modern Art in Bologna to remodel its programming, the Sala delle Ciminiere reopens to the public for a new large institutional exhibition curated by Lorenzo Balbi and Davide Ferri. Fronte e retro (Front and back) is an exhibition dedicated to Italo Zuffi (Imola, 1969) which brings together works dating from the mid-nineties up to 2020 and which will continue during Arte Fiera with another solo show, this time centered on a series of new productions, at Palazzo De’ Toschi, location for the initiatives dedicated to contemporary art by Banca di Bologna. The exhibition project is part of the line of research on which MAMbo has been focusing for some years, that is the investigation on Italian artists from a generation born between the late 1960s and the beginning of the ’70s, selected because they represent a deeply receptive attitude towards international artistic trends, to which each of them has contributed with their own interpretation. After Aldo Giannotti. Safe and Sound (5 May – 5 September 2021), this exhibition is also conceives as a living organism destined to change over the course of its duration through actions requested from the public, professional performances and a constitutive instability of some exhibited works, programmatically open to not completely predictable dynamics.

The exhibition itinerary revolves around some thematic cores identified by the artist, such as the concept of power applied in its negative and positive meaning (with particular reference to its declinations within the art system) and an idea of ​​sculpture which, opposing the idea of ​​construction, identifies itself in the result of the application of contrasting forces to the materials or to the space in which the artist’s plastic intuition lives. A common thread that binds the works over the years (the exhibition does not follow a strictly chronological or thematic trend precisely to offer the public the possibility of activating the works by autonomously exploring their possible associations) is the sometimes obsessive replication of a gesture or a fate that scatters what the artist has built on the ground, thus identifying other trajectories that manage to find a new mysterious balance in their mutual spatial and conceptual relationships. Italo Zuffi makes use of an articulated use of different languages ​​(such as performative actions, photographs, sounds, installations and sculptures), whose specificities in his hands almost seem to merge, to create (real or mental) objects only partially configured as artworks, which are waiting to be completed through an action or involving an idea of ​​performativity.

Exemplary in this sense is to observe how the wide sculptures from the Scomposition series that occupy the central space of the Sala delle Ciminiere (made in the 2000s when the artist was represented by the Galleria Continua) are conceived as paradoxical demolitions of pre-existing buildings whose fragments disjointed and dispersed as a result of the fall, generate a sort of three-dimensional assembly elevation detached from any functional purpose. What is striking if one tries to mentally reassemble the pieces in an attempt to understand the whole structure is the fact that, despite the modules considered individually recall the rationality of postmodern design, their assembly does not lead to any plausible architecture, as if the destruction had done nothing but point out the constitutive inefficiency of a design accustomed to masking its internal aporias with formalism. The same desire to dominate space with a heterodox sculptural action is found in the photographs from the Throwing series (1997), in which the artist respectively immortalizes the repeated throwing of a pillow into the air in a room of Central St Martins College by of an invisible agent, and Dizionario Base (2002), documentation of a performance in which the public was invited by the artist to freely throw a chair into the void. Here too the images freeze a provisional state of balance between masses and forces destined to disperse, whose fortuitous encounter identifies new and stringent hypotheses of structure, within which the elements with physicality have the same importance as the immaterial ones.

The same suggestions can also be found in the video The Reminder (1997) and in the digital animation Shaking doors II (2001): the first is a montage of short performative sessions in which the artist, positioning himself in an awkward and precarious way between the walls and the objects found in an anonymous room use his own body as a sculptural material by subjecting it to efforts that detect the directional lines and tensions of space, while the latter shows some closed doors which, initially shaken by an internal restlessness, open and then deconstruct releasing their components in a dynamic and abstract space. Together with the installation Windy day (2005), positioned behind the ticket office of the museum and composed of the replica of four wooden crates from the fruit and vegetable market knocked to the ground by a hypothetical gust of air, these works are highly exemplary of Italo Zuffi’s attitude to perceive reality as a succession of potential sculptural micro-events, observed and frozen in images with dedication and irony.

The other important thematic line that innervates the exhibition is that of the artist’s positioning in the art system and his relationship with the characters who hold power, also characterized by a destruction also characterized by a destruction from which the elaboration of the artwork arises. Some works tell of the detachment from the Galleria Continua, such as the performance Zuffi for Bonami (2010) in which the artist makes the performers wear scarves (displayed here as if they were banners) that bear the title phrase, a short note he found on the cover of a CD of documentation on his work sent to him by the gallery at the end of their collaboration together with the works left in the warehouse and other archive materials, a clue, according to Zuffi, that the CD had never been subjected to the attention of the powerful art critic. The disjunction from the gallery, on the one hand, has allowed the artist to work more freely and to deepen the more residual aspects of his poetics, as occurs for example in the small installations with wooden twigs in precarious balance on containers for photographic rolls or in the groupings of caps that follow the baseboard of some rooms in the exhibition, inaugurates a commercially difficult period for the lowering of the value of his works. So he sarcastically tries to react with the series of monochrome on canvas entitled Incentives (2015) who promise the most unlikely objects as a gift for the purchase of each work, making fun of the (scarce) value of the author’s name. Despite the mocking claim of visibility and the aseptic and minimalist aesthetic that repeats the stylistic features of the crudest conceptual, those precise forms reveal a profoundly human fragility, the same that, on closer inspection, can also be perceived in the sculptural works, always animated by a playful curiosity towards the world that dilutes the integrity of his discourse on sculpture before it becomes didactic. 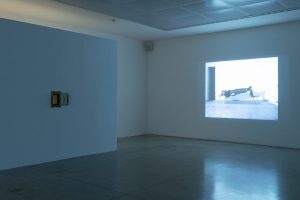 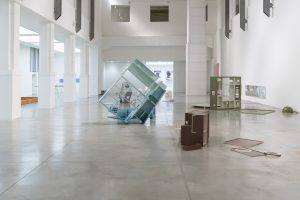 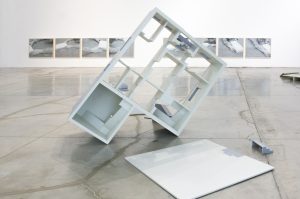 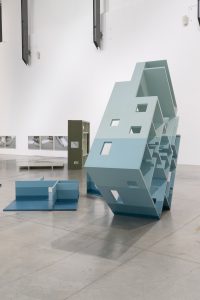 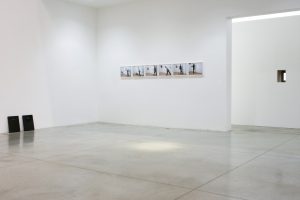