Iva Drekalovich, no fear of ghosts

Flaying the skin of things: th..

Iva Drekalovich, no fear of ghosts

In Marguerite Yourcenar’s book Fires, there is a short aphorism in which the writer states, «I am not afraid of ghosts. The living are terrible only because they have bodies»[1] . It seems that the artist Iva Drekalovich (Trieste, 1995), to whom the Roman gallery Operativa Arte Contemporanea dedicates a solo exhibition (scheduled until September 30th 2022) stems precisely from this thought: the exhibition is aimed at investigating the state of sleep as a moment of figuration not of concrete bodies, but of ectoplasms. Such research is driven by the artist’s personal motivation, as she is interested in plumbing the aspects of rest and nocturnal disturbances; hence the retrospective stands as a poetic quest that bends toward the state of unconsciousness that nocturnal rest brings. Drekalovich’s research takes place with pictorial techniques and the sculptural experimentalism of ceramic material, both strands that enter as moments of the young artist’s research, characterized as they are by an experimental and evolving afflatus.

The exhibition is characterized by a sophisticated installation with a subtle conceptual character, so that each work is the result of an abstraction of the spirit. An equally peculiar element is the lively and intense dialogue that the gallerist Carlo Pratis has with the artist, in his conscious non-conformist choice of keeping this relationship always free, without the intermediation of a curator. Thus, Drekalovich turns out to be unconstrained in the creative phase of the project, generating personal artistic insights in which, paradoxically, despite the treated topic, there are no moments of darkness, but rather, sleep is investigated in its most limpid and spontaneous aspect. In this way, our eyes do not close, but open up in the dubious awareness of what happens in the resting phase characterized by spiritual survivals. The whole gallery environment is muffled, though it presents a balanced set up with sculptural, pictorial and installation works, all leaning toward the discovery of an alternative, dreamlike order with a strongly revolutionary potential.

The artworks on canvas, all presenting shades of green, are characterized by a free technical conformation with a self-generative character, since the cotton canvases, derived from the nautical world, are treated with a mixed technique, which boldly combines painting with the use of embroidered thread protuberances. In these works, Drekalovich depicts bodies with a liquid character, difficult to define, which are inserted into landscapes of wide horizons or residential interiors in which nocturnal ghosts are evoked. Such painting intends to investigate the half-hidden beyond us, and the artist demonstrates that she is not at all afraid of ghosts, whose narrative character she reveals as a counterpoint to the richness of the painting technique characterized by delicate hues with large, uncertain outlines that reveal vacuous details.

The exhibition’s path is based on the principle of the viewer’s identification, skillfully simulating the perception of someone who, falling asleep, is propelled toward the dream. This way, the exhibition could be seen as composed of “expressive modules,” in which Drekalovich’s works belong to a dreamlike reality in the cognitive disorder of mind and memory. Among the most interesting pieces in the exhibition, we mention a group of sculptures set up in an alternative way: hung as if they were ready-made fetishes for the viewer’s fantasies, useful, at the same time, to ward off bad omens from the night’s rest. In this way, the artist shapes the ceramics as so many different episodes of pareidolia, that is, our unconscious propensity to recognize anthropomorphic forms in objects, and creates sculptures in which shreds of human busts and textural weavings merge into a single body.

Differently, wanting to represent the erotic flare of the dream, the second room of the gallery is pervaded by drapes that operate as environmental joints, capable of imposing mobility on the space as well as a suffused sense of unknown place. From this environmental installation the glazed ceramic sculptures are vividly emerging, as if they were iridescent outgrowths waiting to be semi-lit by night. They are ceramic swellings that are explicative of a meta-reconfiguration of the place, much like a double immersion in the aphotic basins of absolute darkness. The wooden cherry sculpture, conceived by the artist together with architect Andrea Eusebi, is equally valuable. A work that fits in with strict coherence, in Drekalovich’s production, both for its experimental character and for being intimately connected with the theme of the exhibition, composed as it is of sharp reliefs of hand-forged metal that look like the eyelashes of an animal creature in its sleeping phase.

In conclusion, this solo exhibition is presented with a tonic and metamorphic character, proceeding by evolution as the techniques used by the artist are different and all marked by distant outcomes. However, Drekalovich intends to trace, and succeeds in doing so, an unambiguous dialogue such as to give an innovative character to the classic ceramic and pictorial language. In other words, the exhibition figures with an aegis from the intimist vein marked by an analysis of the physiological component of man, which is that of sleep, a moment imbued with imponderability that the artist faces without any fear or concern. 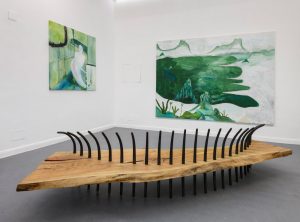 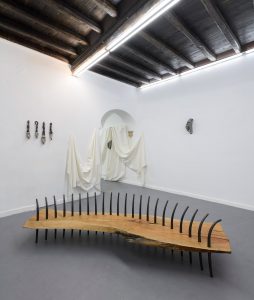 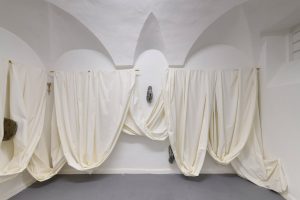 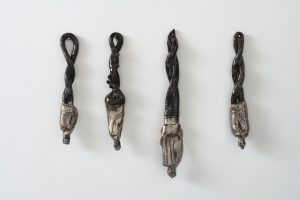