A political statement by BRACE..

In the work of the freelance makeup artist Jonas Ng two universes typically considered separate meet: the realm of the ephemeral and the appearance, to which the professionals who work in the field of fashion usually tend to be connected, and the history of art, in particular Fauvism and Expressionism, movements that at the beginning of the twentieth century helped to free painting from the constraint of the representation of objective reality to inaugurate a new idea of ​​figuration intended as a sounding board for human emotions. These two, only apparently contradictory, find an exciting symbiosis in the artist’s new series of paintings, almost all made as an existential reflection and reaction to the profound discomfort shared by people worldwide due to the dramatic pandemic we are going through. What has been lived, perceived, felt, and experienced by the artist, in her paintings dominates and overcomes the finite dimensions of subjective time and space to express the universal breath of a humanity that, never before, is (or should be) united in the fight against a common invisible enemy.

Jonas Ng paints large-scale female portraits using a vibrant palette of oil paints. Human faces fascinate her for their complexity, which derives from the multiple stories hidden in a wrinkle or facial expression. Originally from Hong Kong, a frenetic and hyper-contemporary city in which people often feel alone and alienated in a continuous race for efficiency, the artist exercises her sensitivity by observing with empathic attitude the hundreds of anonymous faces she meets on the street or the other means of transport. Her precise goal is to tear apart this patina of anonymity, to penetrate beyond the curtain of indifference that makes them all similar and to give them back not physiognomic but emotional characterization, capturing the moment in which the defenses are lowered, and the face lets the person’s inner flame leak out. Beauty is a form of capture, and the artist transforms the moments of abandonment of passers-by she observes into powerful archetypes of the human condition. The symbolic, the real, and the imaginary interpenetrate in a visual and emotional continuum that explores the different gradations of the person’s moods as if the human being’s true identity matrix resided in them, more stringent than any physiognomic characterization.

The female faces of Jonas Ng appear modeled by the color and in the wisdom that artist identifies the facets, the shadow areas and the points of light we find familiarity to her profession as a makeup artist with the real faces that she is accustomed to “shaping” and “painting”. Even the preciousness of the chromatic range used in painting is reminiscent of the refinement of cosmetic colors: translucent purples, iridescent greens, milky blues, shades usually associated with eye makeup, are used here to impress on the canvas the delicacy of a suspended thought or a light blush of the soul, while the reddish depth of the earth brings to the surface more painful and visceral sensations. The artist says she was amazed when she began to paint unconventionally, realizing how emotions are spontaneously expressed by colors, without the need for further formal or conceptual mediation.

Jonas Ng’s interest in capturing expressions and emotions has deepened further during the pandemic, under the influence of which she introduced a much more stringent relationship in her paintings between the subject and the subject’s background. Like every one of us in these difficult times, she feels that she is swallowed by a drama of global proportions that has a decisive influence on our private existence, the impossibility of separating the individual’s individuality from the environmental circumstances in which we live. So, Jonas Ng’s portraits are also ones with the pictorial back layer from which they seem to be generated, but at the same time also swallowed up. The abstract backdrop, in which reminiscences of rocks, water, leaves, or flower petals can be recognized from time to time, is the expression of a new interdependence bond between ideas, things, and people and manifests a mastery not yet fully explored by the artist in the domain of the space. These passages of abstract painting, for the artist, seem to take on a truer consistency than reality because they are the direct emanation of an inner condition that finds consonance and origin in the world in which it dissolves. It is impossible to lie and or escape from an emotion which, stirred and reverberated in intimacy, imprints the surrounding pictorial space.

The artist’s gestural brushstrokes are not detached from nature but, on the contrary, draw strength from the comparison with it: in accordance with Aristotelian aesthetics, the imitation of the trend of natural forms [mimesis] here acquires the meaning of imitation of the ideal form of reality, by which the artist’s work is assimilated to the work of nature. Therefore, Jonas Ng’s painting is inspired by organic perfection to translate in the most harmonious and spontaneous way possible the kaleidoscopic shades of an emotion that flows from the figure to its environment in an infinite circular exchange. The artist is in tune with the emotional sphere of the subjects she observes and the public who in turn looks at the painting through the seductive use of colors: the works do not attack the gaze with violence but attract it gently through the harmony of tones, the transparencies of the glazes, the tonal chiaroscuro, the colored shadows, the fading of one color into another. Painting triggers a continuous process of crossing limits as if there was a constant exchange between inside and outside in a caressing environment where feelings are translated into pure light, and the anguish of the unknown can finally find rest.

In 2020 the artworks “A working day in the airport”, “Can you hear me”, “Waiting for a cure”, “Please come quickly” and “You are not alone” by Jonas Ng were selected as finalists in Arts Dot 2020 in Karlskrona, Sweden, while “You are not alone”, and three other artworks have been included in the + VE / -VE (Art in Time of Pandemic) exhibition in Hong Kong. 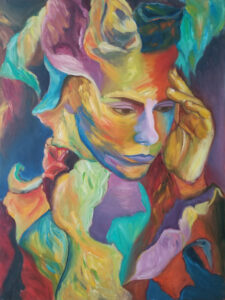 Jonas Ng, When will coronavirus end, oil on canvas, 2020 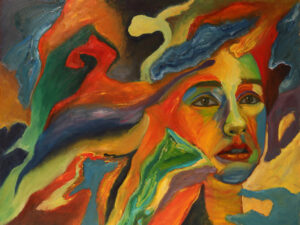 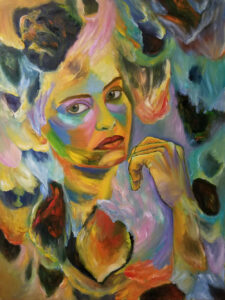