Judith Röder. The Behaviour of Light and Glass

Judith Röder. The Behaviour of Light and Glass

This conversation reflects on the practice of Judith Röder, a Cologne-based artist internationally known for her contribution to the field of light, light-based practices, and photomedia. Dwelling on the artist’s method, processes and positioning, in this interview, we shall discuss the fundamental aspects of Röder’s artistic investigation, departing from a discussion on a choice of lightworks to reflect on modern photology.

Sara Buoso: You have chosen light as the primary subject of your artistic investigation. Whilst referring back to neo-avantgardes movement and forms of light-arts, your choice of using light supersedes any categorization or genres to focus on the light as the primary material of visual composition. Could you explain why did you choose light as the fundamental aspect of your work?
Judith Röder: Before art studies I got trained in a traditional manufacture to create and restore stained glass. In church windows, glass and light build a contemplative space. With this background I had a certain base, an initial point, which became a reference in the development of my own artistic work. During art studies, in the unrestricted handling of materials and their processing methods I learned to understand how glass and light behave. At high temperature, glass melts, flows and can be shaped until it cools down into total hardness. Glass contains in its form, the memory of movement and fluidity. Through video and light projection I evoke movement again, but in a different state of matter. Glass and light build a bond like no other material. A mutual relationship of stasis and movement, solidity and diffusion.

S.B. Light, traditionally the metaphor of universal knowledge, the medium of optics, and the form of the basis of language. How is your practice responding to these principles by contributing to new values?
J.R. Light is a changeable, diffuse, non-representational substance that can only be represented by its interaction with a resistance, a surface. The surface is not only a vehicle of representation, the body in its own state and in its form holds an essential position. Similarities and contradictions of the materials interact. Glass and light are both transparent but different in their physical and non-physical matter. Glass, whether cast or cut, has its shaped edges. It is clearly defined in its dimensions. Light fills the volume and expands it. It is difficult to say where light has its boundary. Glass in its cold and solid form, preserves a static moment. Through light projections, the resting body is set in motion again – in its dissolution, in its transition to immateriality, in its extension into space, in the visible passing of movement and time. Sense and meaning are hidden in the refraction, in the density of light and glass. The statement and affect lies in the nature of the materials themselves. Everything happens on an equal level of meaning, form and matter. Glass forms the body in that light can be experienced as a memory, as a mental, or inner state.

S.B. I suggest that your work explores the relation between light, materiality and affect. In this sense, I perceive a feminist approach to the subject of light which becomes extremely significant, I think, in the contemporary context. How would you respond to this interpretation?
J.R. My work is autobiographical, as all art, I guess. I work from what I know, from my experience, my perception. In history, phenomena of the mysterious or the visionary, which are metaphorical for light, have been attributed to the feminine. Feminism has its presence. I don’t think I have to be a woman to do this work, but I’m sure I have an influence on what my work is. How could it not?

S.B. I think your contribution to the subject and the practice of light is remarkable because you are moving away from the traditional forms of representation and repositions light in relation to processes and the material. In particular, by introducing the use of window glass, your work challenges the way of understanding light’s phenomena such reflection and refraction, to focus on the qualities of scattering, propagation, superimposition, and the transmissibility of light. Similarly, the use of projection technique exceeds from the representation of abstract categories to focus on the qualities of difference, duration, diffractive and site/time-specific strategies. How do you relate light and processes?
J.R. I consider myself a sculptor. I start from the material. I look at it from its basic structure. The plasticity of the substance. How to sculpting light? Dense but porous in its consistence and yet remaining elusive, light defines a space of the in between, a space of resonance. Light isn’t constant, the changing intensity implies the aspect of time. In most of my installations, I am using video projections. Recorded images, projected in loop. Observations in brief duration, registered in my nearest surroundings. The preserving of the transient moment. Making the process, which is irretrievable, repeatable. From a unique moment to a state. An undulation of water, a mist, a curtain moving in my window, motifs which are slightly blurring with its glassy basement. Light sends a signal that evokes and challenges the attention of the viewer and thus enters into a direct correspondence.

S.B. I suggest that your work sits between the virtual and the radical? They are particular evident in the installation Fenster IV, 2013, for example where you use sophisticated technology to configure an immersive field of intensities. On the other hand, the sculpture installation Projektion III, proposes a statement of light that is a situated practice. How would you address these notions and modes of configuration?
J.R. When I was first confronted with the term “radical” in relation to my work, I was confused. I would have never consider my work as “radical” before. There is something violent in this word. So how does it mean? Radical in sense of consequent, or reduced on itself, possibly. Light is a dangerous material. It bears many technical and optical attractions those turns into sensational effects easily. I lose the context of meaning. The reflection of water or a simple lightspot on the wall, contains already the whole information, I want to draw attention to. I observe the everyday life and filter out the seemingly insignificant. The view of the world in the beginning is very real, as an idea. In the end, after light, glass and technique are applied, it is almost immaterial. This does not happen on its own accord. You need to know the resonance of the material, classify its severity or lightness. My compositions are reduced to the essential, the minimum of representation. The utmost precision and formal rigor implements clarity of content. It does not require a big investment or advanced technique to discover that which is interesting, and it takes attention, focus and quiet to understand what is important. In “Projection III” p.ex., the wooden construction holds geometric sheets of sandblasted glass, which, together, form a spatial, translucent screen. On this screen the image of trees is projected. The image of trees obscured by slowly moving milky fog – mists of water springing from a nearby source and blown by the wind. In almost all of my installations, the material part, the “hardware”, constitutes a statistical repetition of the registered, virtual structure. In “Fenster IV“, a room is filled with ultraviolet light, a black frame outlining the space it embraces. Three sheets of glass with engraved images of a forest are placed inside it. What can be seen however is not the trees, but the light between them. The work engages the viewer in the so-called negative space, and by switching the rules of perception it makes visible what would normally remain invisible. The layers of glass sheets creating a depth of field. The doubling of the engraved lines shift the perspective, a soft image noise arise. 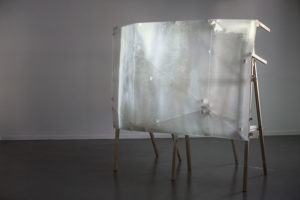 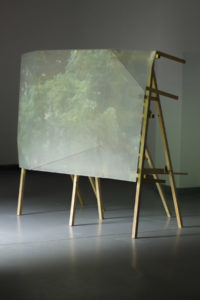 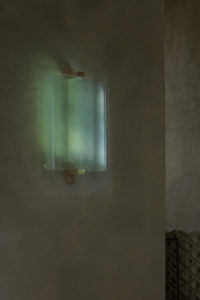 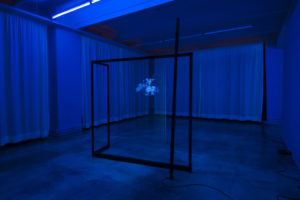 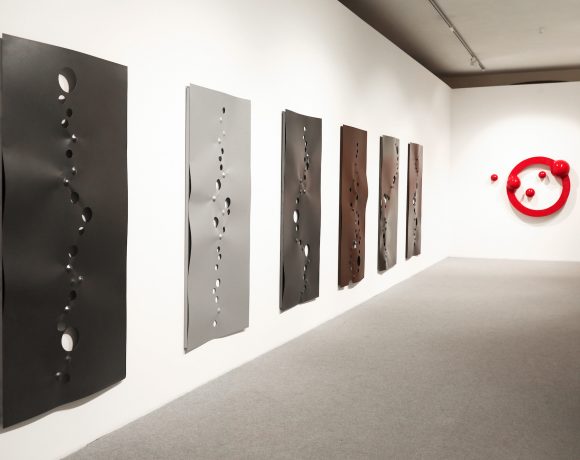