Past / Present in Lugano

‘Les Indes Galantes’ by Clément Cogitore: the ‘wild’ body at the Opera

The artistic practice of Clément Cogitore (Colmar, 1983) intersects cinematographic gaze, video art and photography: vehicles of continuous reflection on themes inscribed in the DNA of every human community, such as rituality, the sense of the Sacred and collective memory. In Cogitore’s works one can sense the breath of the long duration of the images, always complex and outdated: images that escape from their frame and are built as places of collision between past and present expressive codes, meeting spaces between different temporalities.

From an unexpected encounter of different eras and media is born ‘Les Indes Galantes’: a 5’ 26’’ video made in 2017 within the program of ‘3e Scene’, an Opéra national de Paris project opened in 2015 with the aim of creating unprecedented dialogues between the reality of the Opera and contemporary artistic production.

Title and music are taken from the 1735 opéra-ballet composed by Jean-Philippe Rameau with a libretto by Louis Fuzelier: a prologue and four acts of amorous vicissitudes with exotic hues, set in the ‘Indies’ (all the countries to the East and West of Europe). In Cogitore’s video the baroque energy of a song of the fourth entrée, titled ‘Les Sauvages’, becomes a space of expression of a dance crew of K.R.U.M.P. (Kingdom Radically Uplifted Mighty Praise), a form of underground dance born within the Los Angeles African-American community in the early ’90s, during the social riots that erupted after the acquittal of four agents accused of the beating of taxi driver Rodney King. The Baroque drama of Rameau’s music makes a leap of more than two hundred years to meet the tension of the movements of this broken dance, deconstructed and coherent at the same time, born almost naturally with the aim of incorporating and shaping the violence that in those days was spreading in the Californian city. Cogitore’s wild dancers no longer fit into the Enlightenment stereotype of the pure and condescending primitive, but are the authors of a dance that makes the body a mean of identity and political emancipation: a short circuit between two different eras, performed on the stage of Opéra Bastille, through which the artist opens up a space of reflection on a complex issue such as the representation of Otherness by the modern West. The artist moves on this political ridge without any didactic intent, showing instead the trajectories of certain representations and the role they play in the collective imaginary. “From my point of view, Les Indes Galantes’ is about young people dancing on top of a volcano,” says Cogitore in an interview released on the Youtube channel of the Opéra national; and in fact music and choreography proceed with a progressive glow, in which the excess of baroque composition and the muscular tension of the dancers give life to a contemporary ritual with a deeply liberating energy. The same K.R.U.M.P. language has a tribal experience as its matrix: it is a bloodless combat, which follows the ancient urgency of the sublimation of violence through the symbolic representation of art. The performance becomes the dimension in which this need is combined with a claim of socio-political identity, having as protagonist the body and its fractures put on display.
The images in the video seem also fractured, never allowing a full view. Cogitore’s eye is found among the dancers, silent and not intrusive, while it gives back a look always partial, consistently broken and deconstructed, that seems to imitate the same performance with which it is confronted. This empathy completes the trajectory that switches from the ancient tribal dances to Rameau, whose “Les Sauvages” were inspired by a performance of some Native Americans of Louisiana seen a few years earlier, in 1723, then migrates to the K.R.U.M.P. and, finally, stops for five minutes and twenty-six seconds in the viewer’s screen. The performative body becomes a space in which aesthetics, memory and politics merge in this decidedly contemporary, powerful and problematic work.

The last images, when the dance is over, open to a shot from above. Upon the exulting dancers, in a bundle of white light, a subtle condensation arises: perhaps the sweat after the ritual, perhaps the volcano that has definitively exploded. 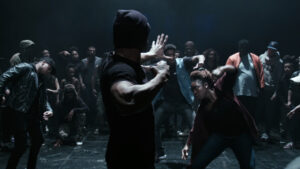 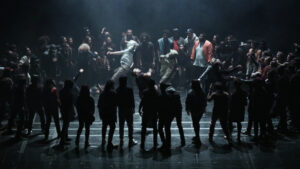 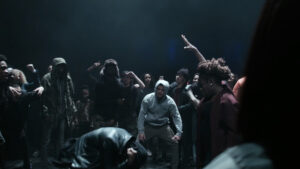