Beyond glass and beyond emptin..

A certain form of solitude is evoked by a pictorial dimension without air, with solitary subjects, to be combined in a pindaric way with the vibrant words of a well-known song that intones these two words: “we are alone”. We now live in a society made up of images, media, continuous information, applications and wifi connections, at all hours of the day and night. Yet in the most industrialized part of the world there is a very high number of lost and lonely people.

Maybe you wonder where I want to go, talking about loneliness and painting. But I can’t help weaving connections that start from contemporary art to reflect on our lives and understand where we are going. So I land the word “solitude” and the key concept of “islandtude”, in an unusual way, driving you to an island like Sicily to discover a remarkable artist who tells, with his painting, that feeling of living or dying out by time.

His name is Sergio Fiorentino, born in 1973. After studying at the Academy of Fine Arts in Catania, he began to take an interest in 20th century design and decorative arts, but what I want to focus on are the faces, the looks of his suspended subjects, almost swimmers of an invisible world. Large faces and, despite their greatness, on them lines that trace the fragility of living and a certain form of pain steeped in the dull and absent gaze. They may already be dead but Fiorentino’s brush strokes redeem them, resurrecting them to new life in his painting, at times, embryonic. Painting that I present to you as a pictorial aquarium where solitary subjects float, navigate on a fluid monochromatic background. Without air.

Immersed in a dimension devoid of time and age, in the symbolic “islandtude” which is certainly not Ithaca but an island far from earthly life, the subjects portrayed are alone and each of them belongs to this choral vision of solitude that unites the breaths suffocating. The humanity of Fiorentino’s pictorial aquarium affects us all because it marks the distance that each of us creates between ourselves and the worlds that do not belong to us, between us and the others, between us and the solitude of others. Painting present in a metaphysical here and now that cancels the categories of space-time in the name of the hardships and grooves of the soul. Timeless indeed.

We remain troubled and attracted, struck by an anxiety, belonging more to the eddies of existence and to the mystery of dying alone. This is the power of Fiorentino’s painting: it takes us where no application, no media can make us go. Are we in the realm of the living or the dead? Perhaps both, but it is what competes with Painting and a high form of Poetry, to impress and excite us strongly so that the dormant and bulimic gaze of our times can be attracted by urgent visions.

Although his painting is like an apparition that could suddenly disappear from the observer’s vision, the faces of his subjects are there waiting to be seen by many of you. If every painting has a secret message to deliver, in front of Fiorentino’s faces the perception is to see these glances statically floating in the waters of silent, painful and urgent secrecy. You will be stunned and impressed because these subjects remind us that yes, “We are alone”. We are immersed in the mystery of life and death and if there was a life after death, this would be an aquarium without air. 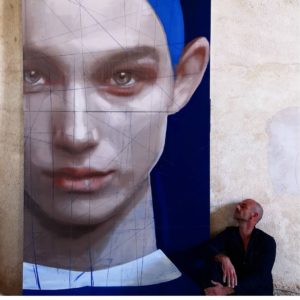 Sergio Fiorentino in front of “Portrait with blue threads”, oil and acrylic on canvas, 2019, private collection 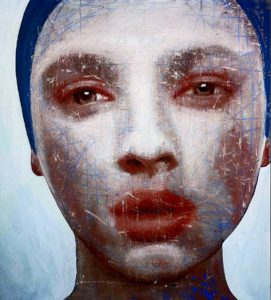