In the beginning was visual po..

Fashion is a serious matter. F..

The etymology of the verb ‘to renew’ shows us how the repetition, given by the prefix -re placed before the Latin word -novare, is something usually inseparable from the birth of novelty. The genesis of the new is born in symbiosis with the repetition, which is not the way in which the already created is manifested, according to the common place. Luigi Ontani knows this well because the renewal in the repetition, the rebirth inscribed in the time of the always-so as the anagram of his name curiously conceals, Ontani-Innato is one of his characteristics. In Albericus Belgioiosiae Auroborus – the latest personal exhibition of the artist at one of the Milanese locations of Massimo De Carlo – the new ex tempore of the Italian contemporary art meets with the historicity of the gallerist’s name, protagonist of the most important events of art in Italy of the last twenty years; in that location in the heart of Milan, Piazza Belgioioso, in an eighteenth-century building located in the same small square that gave birth to Alessandro Manzoni. Certainly a coincidence, but the meeting of three personalities in time and out of time, for the originality that distinguishes them each in its own way, is something that is noticed when visiting the exhibition, especially if it is the first time in the gallery.

For Albericus Belgioiosiae – as the playfully “Ontanian” title suggests – Ontani has coined eight large polychrome ceramic masks, radiant in the hues that return a brilliant mother-of-pearl shine and which only the artist knows how to combine in the fruitful eclectic game that satisfies not only the view but also the mind. In fact, the works are full of symbolisms that tell, even through the use of heraldry, the history of the place in which they are located. Like the uroboro dedicated to Alberico di Belgioiso, a Milanese esthete who commissioned the construction of the building in the 18th century; or PalmAltrove, the golden star sculpture in the center of the main hall, in which the shape replicates the geometry of the hall floor, as well as representing the union between East and West (the cosmic gardens of Maharaja Jai ​​Singh observatory in Delhi and Jaipur and the Tower of Pisa). A story that in the style of identity that distinguishes it, is always articulated through the polymorphic person of Ontani. In the entrance hall, from the gold of the Etra d’ESTEtica mask dedicated to painting, one can see the tip of the brush, a divine instrument that gives the rule to art (to put it with Kant), the mischievous and multicolored face of the artist. Listening to the narration of the place, brought back with one’s own self, is not just a metaphor but a preliminary practice that the artist adopts in the conception of the exhibitions, as some decorative details of the masks seem to want to tell us. Ontani presents himself again and is represented in the artistic práxis through the union with the otherness of the place and of the story that nourishes immortality the very personal but other work of its author, symbol of the meeting between the I and the Other that every time happens and which exemplifies the possibility of renewal in chameleonic skin as well as clothes, of the only Luigi Ontani. 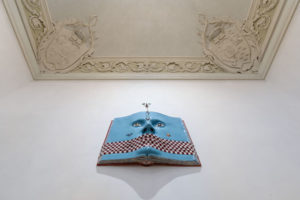 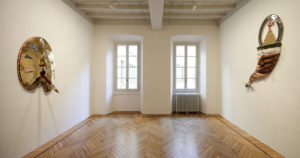 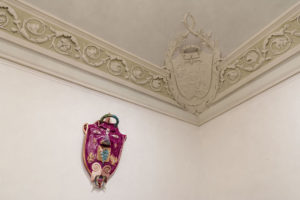