The suspended worlds of Daniel..

On the occasion of Una Boccata d’Arte (25.06-18.09 2022) – the contemporary art project spread throughout Italy promoted by the Elpis Foundation in collaboration with Galleria Continua – the artist Simone Bacco (Rome, 1995) was invited to the small town of Spinazzola near Barletta. The project was curated and coordinated by VOGA, a non-profit organization dedicated to the research, production and enhancement of contemporary art in Puglia composed of Bianca Buccioli, Nicola Guastamacchia and Flavia Tritto. Una Boccata d’Arte, now in its third edition – coordinated by Bruno Barsanti, new director of the Elpis foundation – aims to trigger a dialogue between artists and the territory by choosing small villages (which are often forgotten by tourism, but not for this less beautiful than the most famous ones in Italy) as privileged places.

On the occasion of the opening, on Saturday 25 June at around 6 pm, in the municipality of Spinazzola, a marathon was held in the 700 meters that define the perimeter of the historic center of the town. Yes, you got it right, it was just a sporting event. Once in the small town of Spinazzola, visitors and locals registered for the marathon, received a silk-screened jersey and a number and were shown the route to follow. Path decorated with banners, graphics and other decorations containing phrases that invited participants to take their time and not to follow the predetermined path, but to enjoy the moment exploring the beauty that surrounded them and follow the path they preferred, being able to allow themselves to cheating. Along the streets of the historic center, following the sporting event, there was the Santa Barbara collective – made up of Alessandro Matera, Lucia Rizzo and Federico Francesconi – who, invited by Bacco, built a rickshaw for the occasion. They walked the streets of the town doing commentary, interviewing its inhabitants and hosting the participants in the wagon, inviting them to push uphill and to tell about themselves.

In this game of hospitality and the rediscovery of a place and a community, the Simone Bacco Marathon took place, in the most total success of fusion between life and art. The public ran in the streets (or walked while drinking beer, like me) in random order, against the current, uphill or downhill: dogs, donkeys, children, elderly people, bicycles, rickshaws and townspeople. All regardless of the laps or the roads traveled, all intent on laughing and chatting and not on winning; remembering that sport is first of all a game, and games are only beautiful when you are having fun. And at the end of the race, when the finish line was crossed, the mayor of the town, the organizers and organizers of the event, the councilors, the artist, the art public, friends and friends, the runners and even the priest of the local parish, went wild in group dances with the sound of the municipal DJ in the background.

The VOGA, curators of the marathon, write: “Interested in activating forms of participation that intersect places and communities, Bacco makes this sporting event a tool to involve citizens – made up of runners, residents or simple visitors – in a circular and temporary dimension where social cohesion and competitive competition coexist. Unexpected, performative and theatrical elements accompany the installation and management of the event, opening up to the possibility of cheating, improvising and deliberately losing. Between advertising for an imaginary future, a portal of departure and arrival that echoes the nearby ruins of the Castle and inscriptions that invite us to transgress the circuit of the competition, Simone Bacco invites us all to take part in a game whose premises are known but the results are unpredictable. In this kaleidoscopic game of perspectives, Maratona focuses on the question of time: the time of the runners’ competition, that of waiting and cheering, but also the time that each of us struggles to pursue in the daily competitive spirit of our society. Isn’t liberation from time the real prize of the marathon then? “

All participants (and not) are invited to return to Spinazzola on August 28 for the award ceremony. What will the prize really consist of? Who will win? But unfounded, who really cares about winning if we all have fun? 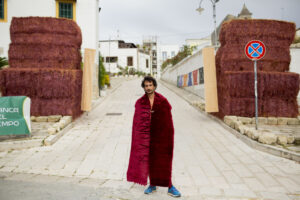 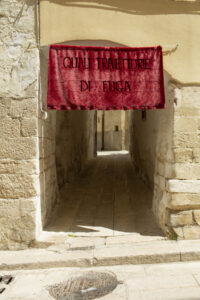 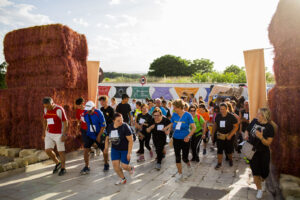