Marcello Tedesco talks about the Capital Project A...

In these days the ancient village of Colle Ameno, near Sasso Marconi (Bologna), has come back to life thanks to a series of events organized as part of the artistic residencies organized by the municipality of Bologna. Among the Nuove Narrazioni (New Narration)s that will be extended during the year we find Capital Project Art Residence Program, a collective formed by Marcello Tedesco, Silla Guerrini, Francesco Di Tillo, Luca Veggetti and Moe Yoshida. In the evocative setting of Villa Davia – inaugurated for the occasion after the recent restoration – the exhibition Forme di discontinuità (Forms of discontinuity), the result of the efforts of this first period of residence, is underway until 16 September 2020. We met Marcello Tedesco who told us about this new experience.

Antongiulio Vergine: How was Capital Project born and how does it fit into the New Narrations of Colle Ameno?
Marcello Tedesco: Capital Project Art Residence Program was born following the public tender that the Municipality of Sasso Marconi has launched with the aim of assigning some artist studios adjacent to Villa Davia, in the village of Colle Ameno. The idea of ​​the project is to restore the village to its original vocation as an Ideal City, which is a place where the various components of the community live in a laborious balance. We decided to participate because in this operation there were already some points that we intended to address, especially as regards the relationship between the cultural, legal and economic dimensions. The group of artists who will work during the year of residence is made up, in addition to myself, also by Francesco Di Tillo, Silla Guerrini, Luca Veggetti and Moe Yoshida. Of course, it will not be a question of producing works of art in the traditional sense – or at least not only – but rather of starting an artistic practice capable of actively inserting itself into the dimensions mentioned above.

What is the meaning behind the exhibition Forme di discontinuità?
The exhibition was strongly desired by the administration of Sasso Marconi and by the mayor Roberto Parmeggiani, who wanted to give a strong signal through art, the only one capable of communicating in the most immediate way. As far as we are concerned, we experienced it as a challenge and a chance to immerse ourselves in a completely new project, from all points of view. From the first visits to Villa Davia we collectively imagined building a sort of exhibition-spaceship that was able to abandon everything that is already known – habits, conformisms – and that was capable, therefore, of transporting us towards still explored territories – the goal, after all, of our experience in this residence. We identified, therefore, with a certain dose of humor, in the figures of artist-explorers traveling on this exhibition-spaceship towards completely unknown worlds.

Your works perfectly interact with the context of Villa Davia and it seems that they have always lived in its rooms. What sensations did you feel in relating to this suggestive place?
The first thing we all felt was the incredible charm emanating from the spaces of the villa, built in the 18th century. This place, incredibly large and labyrinthine, immediately seemed to us alive and with its own conscious intelligence. In fact, during the various inspections we experienced the sensation that the space was able to release messages, and, a bit like in Andrei Tarkovskij’s films, a real osmosis was created between us and architecture. And from this merger it is as if a new architecture had been generated, with a new function. The division of the rooms and the arrangement of the works refer to the idea of ​​the spaceship I was talking about earlier: there is in fact a cockpit, there is a crew, an engine, a room for orientation and so on. Then there is a very dark room that constitutes the unconscious of this spaceship, because this vehicle is not just a simple machine but a real living organism.

Returning to Capital Project, what are the dynamics that govern your work? Do you discuss the works to be created, working closely, or do you develop individual discourses that come together at the moment of the exhibition?
The structure that regulates the work within the studio is that of a collective, so each artist follows his own project which he/she then shares with the others and each one gives a contribution. As I told you before, it will not just be about producing works of art, but about working on the development of a new creative practice where the social dimension merges with the individual one. An example is given by the audio recording that welcomes the viewer in Forme di discontinuità, in which all together we discussed our works in a discourse that is itself a work of art, a sort of sound sculpture resulting from the creative process that united us all.

What relationship, in your opinion, binds art to practical issues such as economic, legal and social ones? Some may think that absolutely nothing has anything to do with all this …
Therefore, if we consider art in the traditional sense, the relationships that bind it to the economic dimension are those that we all know, that is, those inherent to the art market. The relations with the juridical dimension are instead more subtle and concern the way in which a power decides to represent itself. At this point the cultural dimension takes over, which can be used by a certain power in an instrumental way, with the risk that it becomes only a tool for consensus or one of the many areas that create a certain emotional climate. This, from my point of view, is already a representation of power, something induced which then becomes the reality in which everyone is forced to live. Of course, today all of this happens in a subtle way and, in some ways, in an unconscious dimension of society – an aspect that can become dangerous in the long run. Furthermore, it should be noted that today the legal dimension is in turn strongly conditioned by the economic dimension: this phenomenon creates a climate in which the action of each programmatically damages that of the other. The speech is very complex, and I have really summarized a lot. What interests us, however, is to permeate legal, economic and cultural life with creative thinking in an absolutely non-antagonistic, and even less controversial, perspective. We simply want to begin to deal with the constitutive aspects of human life that until now we have let others think, mistakenly considering them too complex areas to deal with. The challenge that the cultural sphere must accept today is not to fear the elaboration of this complexity; otherwise the marginality of the cultural discourse will be increasingly extended. Furthermore, continuing to consider objects and artefacts of various types exclusively as works of art is currently a rather comic rearguard.

Last question: are you already thinking about future projects that will characterize your residence? Please tell us some anticipation on what will happen during the year.
Certainly the priority will be to get to know the inhabitants of Colle Ameno well and the other artists and artisans who have won the residence call, with whom we will certainly collaborate. What I can tell you is that all of us feel the need to create a collective type of practice whereby the individual places himself with respect to the other – whether an individual or an institution is indifferent – in a perspective of cooperation and not of competition. In this lies the true form of discontinuity with respect to what happens in the world. 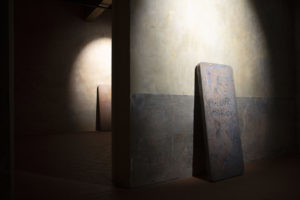 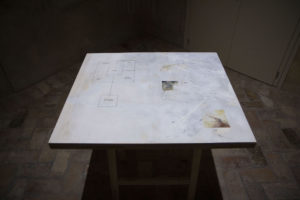 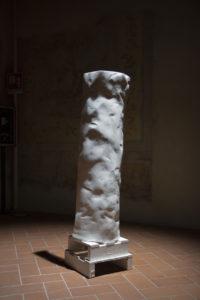 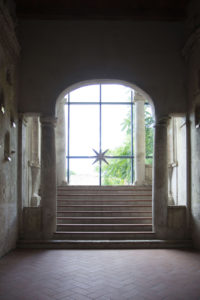