Marcin Dudek. The Crowd Man (one of us)

Marcin Dudek. The Crowd Man (one of us)

In Italian, the word “crowd” comes from “follare”, used in the textile industry to say “subjecting wool fabrics to fulling”. The other use is “to crush, compress the cloth to give it greater consistency”. Both therefore refer to the sensory impressions of pressing. In other languages it’s no different. In ancient English “crūdan” means “press, hurry” of Germanic origin; it relates to the Dutch “kruien” which means “pushing in a wheelbarrow”. In Middle English the definitions of “move pushing” and “pushing one’s way” have arisen, leading to the meaning “congregate”, and therefore (in the mid-sixteenth century) to today’s noun. In Polish, the origins of the word come from “tłumić”, that is “to repress”.

It therefore seems that, at least in its name, the crowd is not a substance destined to make us feel good. Crushing of bodies, pushing, repressing, doesn’t describe a friendly situation at all. On the other hand, “man is the animal of the herd, he needs intimacy, herd, warmth and physical contact with others” (Camilla Läckberg, “Fyrvaktaren”). The crowd fulfills our intrinsic needs, it refers to the roots of humanity, gives birth to the desire for power situated in the part of the ancient, animalistic brain. Being part of the crowd, the unpredictable group, awakes the instincts of our non-civilized ancestors, ignites the natural impulses managed by the rules known only to the psychologists of the crowd and our unconsciousness. Being part of it takes away the responsibility and allows us to stay out of rule, together with others, to feel strong and superhumanly capable of conquering the world together.

Marcin Dudek, born in 1979, studied at the Mozarteum art university in Salzburg and Central Saint Martins in London. He creates installations, paintings, objects, sculptures, often combining them with performances. More or less from the age of eleven he was part of the hooligan subculture, which has remained for him one of the main sources of creative propulsion. From 31 May to 26 August 2019, in the Contemporary Museum in Wroclaw, Poland we can see his individual exhibition titled “The Crowd Man” curated by Piotr Lisowski.

“The Man of the Crowd” (“The Man of the Crowd”) is a story written by Edgar Allan Poe, published in 1840. At one point of it, the author said: “The wild effects of the light enchained me to an examination of individual faces; and although the rapidity with which the world of light flitted before the window, prevented me from casting more than a glance upon each visage, still it seemed that, in my then peculiar mental state, I could frequently read, even in that brief interval of a glance, the history of long years”.

Currently, the passion to discover the enigma of the crowd is formulated by Marcin Dudek in Wroclaw, but he, unlike a noble poet, investigates the world where aggressiveness is common, impulsive behaviors are the daily bread and one speaks rather about physical survival than deciphering souls. The research is concrete, almost scientific, the artist constructs systems that he observes later, at the same time recalling the personal anxieties brought directly from that period in his life. Contrary to Poe’s quiet nineteenth-century lyrical subject hidden behind the coffee shop’s window to watch the neutral mass, since 1990 Dudek was personally part of the group of fans of the Krakow soccer team called Cracovia (where Krzysztof Piątek played between 2016-2018). After years of participating in the life of the stadium, he turned into an artist, and learned the rare ability to bring out what grew inside of him, what left mark on the mental traces that reflect his personality, and consequently, his works. Growing into an artist contains knowing how to describe the experience with the shape suitable for it.

From the beginning of the exhibition the atmosphere strikes us with two installations. The first “Recovery and Control” (2017), located right at the start of the route is a security gate, usually used at entrances to mass events. A moment later we see the „Breaks Into Song“ (2017-2019) tribunes stripped of everything that once created them, leaving only the basic metal skeleton and the protruding fragments. The very peculiar visual story of Dudek appears in his collages like „The Stone Steps of East Sector“ (2017). They are the scattered forms, looking at which, we immediately enter the very specific universe that resembles a linguistic testimony of a person who went through traumatic events. We recognize the expressions of pure consciousness, which here, instead of trying to hide something, remains as they really are, gathered in the limited space of the picture. The collage series are composed of various materials, including: self-adhesive sheet, adhesive tape, PVC tape, fragments of books, cardboard, wood covered with UV paint and fabric tape.

In the exhibition we will see the story, on one side already detached from the distant history of the artist in the sense of timing, from another point of view, still emotionally close, composed of impulses that flow around endlessly inside the closed circle. The objects, even if some are huge and not pleasant at first sight, seem extraordinarily personal. The collection gives the impression of the content of the private room, even if, except for a few clothes owned by the author (modified with plaster, wood, fiberglass and nylon) the environment is emotionally torn and cold. It’s ambivalent, because an artist’s touch is unexpectedly gentle and the observations of the world that in reality often turn out to be vulgar, somehow don’t seem like it here. 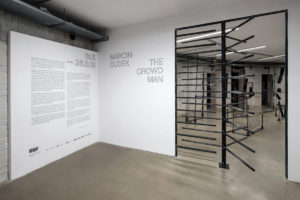 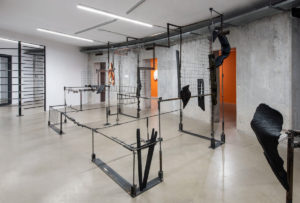 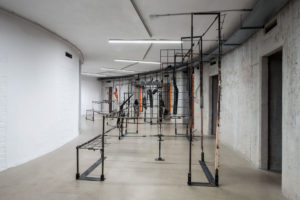 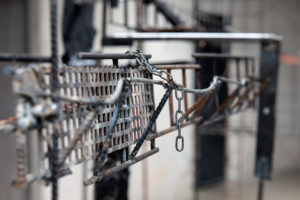 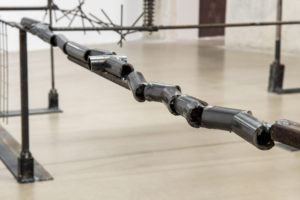