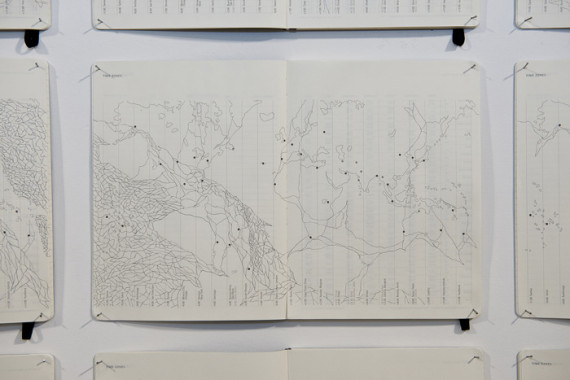 According to theoretical physics the blacks holes are celestial bodies in which matter is directly transformed into energy due to a gravitational field so strong and intense to prevent the escape of any element. Even light can escape its force of attraction and for this reason it is invisible and only indirectly detectable through the collapse of the material which precipitates inside. A hypothetical body in free fall would then be crushed to infinite density and added to the total mass of the black hole, the center of which is located in a region where the curvature of space becomes infinite absorbing the overall mass in a volume equal to zero. The event horizon is the space-time boundary beyond which there is nothing but the black hole, it is the limit beyond which any event could not return and threshold of the visible beyond which any event could not be detected by an outside observer, making it impossible for any review of its actual existence.

These suggestions are at the origin of the site-specific exhibition project by Marco Di Giovanni (Teramo, 1976) at the International Museum and Library of Music in Bologna for the fifth edition of ART CITY, the institutional initiatives program sponsored by the municipality during Arte Fiera with the aim of re-reading the city through the eyes of contemporary artists invited to set in the historical collections. In line with the main themes of his work, which has always focused on a poetics of distance and look over with the help of performative objects and magnifying or deforming optical devices, the artist conceives an immersive environment in which with different languages as sculpture, drawing, sound installation and performance converge and interact. If physics suggests that much of reality is actually dark matter that we cannot even imagine, our actions and choices are only seemingly free because they are implemented within the very narrow confines of human perception and knowledge. In this way it is precisely the awareness of this limit that define our identity in the world and the ongoing attempt to overcome it, despite the consciousness of its impassability is the root of the force which drives us to exist. That’s why the artist chooses to retrace his personal history from Gran Sasso, an installation composed of 38 Moleskine diaries open on the World Map display divided by time zones, where thin strokes of graphite integrate and override the printer fonts and cancel their readability to show the profile of the mountain range as it was seen in the window of the house where he was born and grown. The conventional representation of time and space is replaced by Di Giovanni’s local singularity as a reconstruction of the only space-time that he considers possible because shaped by his inner experience.

The work is complemented by a soundtrack in which a narrator tells with strong dialect some incomprehensible family anecdotes that are fragmented and reassembled on a basis of thunder sounds and rolling stones. The track, produced by the actor Andrea Ettore Di Giovanni and the composer Vincenzo Core, both artist’s cousins, opposes to the reassuring perception of a familiar and well known horizon the obscure murmur of an unconscious that hideitself in our certainties until they explode. The confusion swells and expands in the second environment in which it is displaced the exhibition, an ancient room with walls entirely covered by sound-absorbing black panels, in the middle of which stands Heavy-Pod, a stubborn metal case made of rusted iron that emits a loud vibrating noise corresponding to the registration of all phases of its production in carpentry. Closed in itself and inviolable from the outside, it is endlessly screaming its origin and its matter but its voice is destined to refract against the ceiling and to implode in on itself without ever being able to reach the outside.

When you enter a black hole the reality is divided into two: on one side the material is incinerated and subsumed in the dense immeasurably dark mass, on the other does not undergo any transformation because due to the gravitational time dilation as an object falling into a black hole approaches the event horizon seems to slow down and use an unlimited amount of time to reach it. If it is sure that once you cross a certain threshold it will be impossible to go back, it is theoretically possible to get out from the black hole using it as a wormhole to another dimension: allude to this possibility the three circular windows that interrupt the continuity of the walls revealing a slice of the first room and, during live performances, the actor and musician’s upturned faces while they are interacting in an adjoining room of the museum. By empirically and playfully proving the existential dismemberment of a body sucked into a black hole where you can’t hear what you see and vice versa, Di Giovanni returns circularity to the dispersion assuming a workable perspective although it could be confusing and misleading.

The heart of the exhibition, its unconscious origin and ideal continuation, is preserved in a secret niche where the artist puts Black, an unfinished notebook whose pages are meticulously filled with black ink strokes that make transpire condensed mental landscapes identifiable only through the observation of the different course of the pictorial gesture. The ubiquity of black recalls and anticipates the walls that surround the room and the infinite layering of a material that saturates an imploded space, but at the same time suggests that the unconscious is a bundle of energy and potential possibilities waiting to be released to find expression in a unique and irreversible occurrence which makes the immanent their presence. 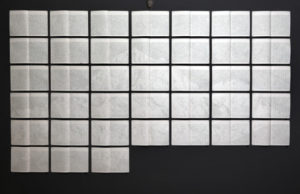 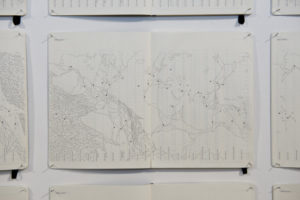 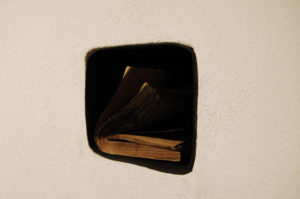 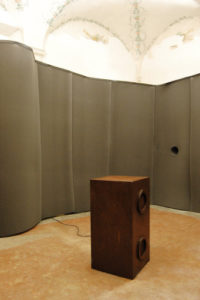