In 1977 Marina Abramović and Ulay, at the dawn of their artistic partnership, were invited to Bologna by Ginevra Grigolo to Studio G7 gallery, a space she founded four years earlier with the aim of investigating the new instances of art, to perform Relation in time, an action in which the two spent sixteen hours sitting back to back with their hair braided into a single hairstyle. On that occasion the public, admitted into the gallery only in the last hour when the performers were at the limit of their resistance, found themselves in front of a single being who, despite being made up from the fusion of the two lovers, manifested the substantial split of their individual souls in the constraint of a posture that made it impossible to really look and understand each other. The Try exhibition by Marilisa Cosello, a young artist invited to preview the fifth episode of the cycle of the same name which began in 2020 in full lockdown at Alberto Burri’s Teatro Continuo in Milan, follows with intelligence and passion this line of research. The project shows indeed how much the new gallery director Giulia Biafiore is committed in the developing of the prestigious cultural heritage of the gallery, both from the point of view of the sounding of emerging poetics and for the desire to continue its performative tradition.

The basic idea of ​​the the Try cicle, which has already involved places with very different environmental connotations in different Italian cities, such as the former Chiesa di San Francesco in Fano (Try #1) during the Centrale Festival, the Piazzetta of M9 – Museo del ‘900 in Mestre (Try #2), the underpass of Viale Lunigiana in Milan for Biennolo 2021 (Try #3) and the Museums of Palazzo dei Pio in Carpi (Try #4) is to decontextualize real sport actions performed by professional athletes staging them in urban places or places dedicated to art with the intent of imagining a new and powerful mythology of the female able to overwrite the rhetoric usually connected to this theme. The live sessions include the execution of actions related to different sports disciplines, such as fencing, boxing, basketball, artistic gymnastics, rhythmic and weight lifting, in front of the art public, whose presence, in addition to the change of location, contributes to transform the competitive gesture into an artistic performance that is fully consistent with the ritual codes of the system to which it pertains without making any changes to the athletic protocol.

Giorgia Bordignon, silver medalist at the Tokyo 2020 Summer Olympic Games, was invited to Studio G7 for the premiere of Try #5 on the day of the opening and inside the gallery emptied of all other elements she performed a double weight lifting under the direction of a female referee. The figure of the referee, always present in the actions from the Try series, represents for the artist a sort of ferryman who acts as a link between the performative act and the abstraction of the space inhabited by the bodies of the athletes disputed between instinct and coercion of the rules. The minimalist structure of these performances has the effect of dissecting the sporting ritual as under a magnifying glass making all the details and sounds, evident at close range, amplify themselves in a space made conceptual and aseptic to reveal, without adding of further rhetorical tricks, the emotional and symbolic implications of a gymnastic exercise that discovers with surprise to be an existential metaphor. In Try #5 the athlete in front of the audience-witness challenges her own limits by lifting weights of increasing caliber gradually added by the referee (who plays the double role of choreographer and executioner) and her final release, when the latter allows to let them go to the ground, also becomes catharsis for all the witnesses who, for the short duration of the performance, identified themselves in the action by emotionally assimilating their own individual burdens to those loads.

The performative phase in the artist’s poetics is always followed by a translation of the live action in other languages, such as photography, video and graphics, which detect and develop the formal and aesthetic potential of the staged sporting act. In the exhibition in the gallery, quickly rearranged on the day of the opening at the end of the performance, we see some examples of this reworking method that document the previous urban incursions of the Try project. In the video Try #3, projected across the wall so that the moving characters are almost life-size, we see two young female boxers facing each other under the watchful gaze of the referee in a ring drawn on the asphalt of the Milanese underpass to interpret the violence of the metropolis and the conflict of human relations that its crowding implies. Here too, in the nervous agility of the two interpreters, whose chromed uniforms are the only concession to formal elaboration admitted by the artist, the viewers can sensually experience a pure idea of ​​frontal confrontation in which to project the various levels of relational conflict that each of us has to face in the course of life and imagine subsuming the energies of the two women in combat to bring back their bewilderment in a regulated field. Another aspect that emerges preponderant in Marilisa Cosello’s research is actually the dialectic between rule and freedom embodied by the sporty body understood as the product of rigorous training protocols in which everything is controlled to prepare the athlete to react to the absolute unpredictability of what happens during the race, a contingent peak of freedom to which everything is aimed.

In the photographic images from Try #1, the fromer Chiesa di San Francesco in Fano becomes the scene of a dialogue between the body of the gymnasts and the evocative mutilated architecture which, being devoid of cover, also incorporates the sky above it, white as the marble that covers the still intact fragments of the structure. The bodies of the young girls, rendered abstract by their adaptation to the codified postures of the sport discipline, identify lines in space that can be fully interpreted as a drawing, while the notes of color that distinguish their costumes (intended as an archive of the possibilities of the feminine without reference to any specific semantic connotation) constitute a chromatic trace of the elevation movement with which the athletes take possession of the space. For Marilisa Cosello the active feminine body drawn and colored becomes a political body that affirms a new aesthetic of the feminine based on the perfection of a physical prowess that is demonstrated (and therefore legitimized) by sports performance. To confirm this we see a sequence of pencil drawings that reproduce photos of athletes taken from newspapers from the 70s and 80s captured in moments of waiting or rest: together these characters, once again made essential by the simplification of a drawing that seems to want to standardize the individual somatic features to concentrate on the absoluteness of sporting intention, present themselves as the tutelary deities of the new mythology developed by the artist, sanctioning its immanence in a translation of the archetype towards an imaginative dimension. 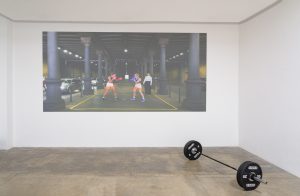 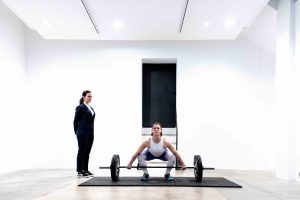 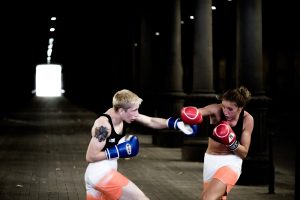 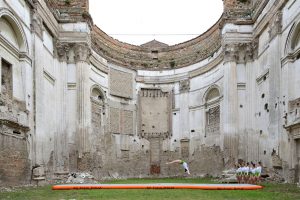 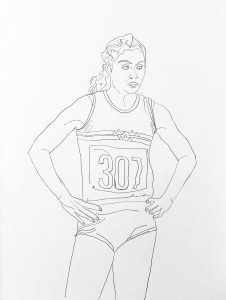