Reinhard Mucha at the Kunstsam..

Michel Blazy, since the nineties, when he was completing his training at the prestigious Art School of Villa Arson, in Nice, has been interested in the reworking of an aesthetic that includes a fusion of organic and inorganic materials. The meaning of life and death, as the natural cycle of things, was therefore already present in his poetics. Among the various oddities of materials used to date, we remember: a large mushroom made with soy spaghetti; paintings made with mashed potatoes and beetroot; pasta sculptures and a cave/sculpture on which mung beans (or the Indian green bean, better known as green soy, low-calorie food and ideal for keeping “bad” cholesterol levels under control) have sprouted, so much so that we can talk about plant life transported from scratch to the exhibition space. To all intents and purposes, this is a next step to what Anselmo took when he placed the lettuce anchored to the stone or to Mario Merz who arranged aubergines and fruit on his spiral tables: there a life that was destined to die and that was flaunted in its pure physicality, here, for Blazy, a life that can continue and transform itself. The concept of perishability, physical contact, multisensory experiences, on the other hand, remain in all these cases the values ​​placed at the basis of the aesthetic experience. What is certain is that designing from perishable materials or those destined for mold or drying underlines not only the precariousness of life but also forces us to deal with sculptures or installations that are transformed for the duration of the exhibition and question us about our world, on the relationship we have established between natural and artificial, between biodegradable products and those destined to contaminate the planet.

The artist subverts the hortus conclusus model in favor of undecided spaces, that is, territories lacking in order and therefore representative of natural evolution. An evolution that also manages to incorporate pieces of household equipment or everyday life, such as everyday pullovers or sneakers that become shelters for herbs and molds.

Now, Le Portique, after hosting “Pull Over Time” in 2016, re-proposes Blazy’s work with the exhibition “Six pieds sur terre”. Although the title calls to mind the television series “Six Feet Under” (HBO network, 63 episodes, 2001-2005, focusing on the family history of a funeral home in Los Angeles), in the artist’s idea the title “contains in a synthetic way the idea of ​​death and life” or a complete cycle where giving and having always reach their logical conclusion. However, the exhibition does not propose to disappear or sink into humus, but to take it out, to examine it, to make it the main subject of our daily life, to the point of trampling the ground to connect with living matter. In this sense, Blazy’s living carpet, presented here as the fourth example of a cycle that began years ago, is certainly indebted not only to oriental carpets (moreover, the “floor” of nomadic homes), but also to the concept of “Nature carpet” by Piero Gilardi (incidentally, Blazy created one of his most incredible installations for the PAV in Turin: “Forêt de balais”, 2013-2018, made with brooms of sorghum, earth and water).

The carpet, in Blazy, passes from the symbolic to the tangible, from the metaphor to the consubstantiality of things: if the decorations with floral motifs refer to the garden or to Eden, here, bringing the plants in a closed place domesticated by man, the artist transforms the inside into the outside and reinserts it in the circuit of life. In this way the exhibition space is transformed into a vast garden, where plants of different species are mixed: “The spontaneous vegetation of my garden welcomes the grasses of the pampas, the Himalayan impatiens, but also the cacti bought from florists: irrigation of this vegetation cover ensures the development of plants and allows you to follow their evolution. In this way the exhibition can be visited in several moments to understand in situ the changes to which it is subjected”. Thus “Six pieds sur terre” brings the plant world into a domesticated and organized space, causing an encounter between the artefact and nature, between the outside and the inside. New forms of life emerge from the carpet and its inert motifs. In a decisive way, this exhibition at Le Portique (a kind of work in progress) celebrates nature by claiming its rights, revealing its mysteries and secret rules. Ultimately, the ambiguity of the work is brought to the fore together with the transience of existence, returning, in another way, to the theme of the “vanitas” of ancient memory.

Michel Blazy’s works have been purchased from numerous public collections including the National Museum of Modern Art – Center Pompidou; the Museum of Old and New Art (MONA), Tasmania; the Museum of Modern Art of the City of Paris, France; the New Museum of Monaco and various regional funds for contemporary art (FRAC). We also remember that the author was invited to the 57th Venice Biennale, “Viva Arte Viva” section, curated by Christine Macel. 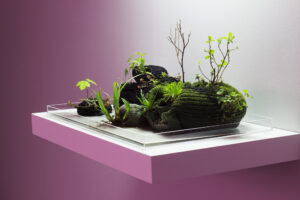 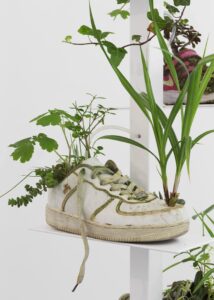 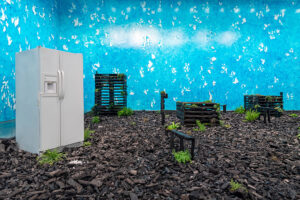