The Edge of Voices. Plural per..

Michetti, Spalletti and new landscapes with or wit...

And the flowers too. An exhibi..

Michetti, Spalletti and new landscapes with or without figure – 72nd Michetti Prize

In 2021 11 artists were invited to participate in the 72nd edition of the Michetti Prize: Michetti, Spalletti and new landscapes with or without figure is the final exhibition, curated by Daniela Lancioni at Museo Michetti in Francavilla al Mare. All of them create a dialogue with the theme of landscape, showing a trend that goes through a period of a century. On this occasion, in fact, the landscape is not understood only as a definition, but is brought back to two categories of art history: with or without figure.

The operation establishes both as a starting and ending point the short-circuit between Processione by the 19th century painter and photographer Francesco Paolo Michetti (1895), and Silenzio, Montagna by Ettore Spalletti (2013). The combination of these two works produces an expansion of space, in which on the one hand the golden reflections of Michetti turn on the painted surface inhabited, while on the other the light of the atmospheric colors of Spalletti completely invests reality.

The works of 11 artists from different generations are involved within this interval, expressing through different languages and techniques the perception of the concept of landscape, for a reflection that renews and opens its values. The path that we follow along the rooms of Palazzo San Domenico goes through the charcoals by Luis Serrano, which show some views of the Mancha region (Spain) full of sensations. In the room next door, Simone Cametti installed in the transport boxes a path traced by two cold neons, which follows the one that leads to an abandoned refuge in the Monti della Laga, where the work was lit, creating a new space inside (Luce progetto Bivacchi, 2021). Near this we can see the testimony of his performance, carried out in 2014 for the Greenit series, when he colored with the same product the grass in the video.

The pocket puzzle by Eleonora Cerri Pecorella is dedicated to the sky and its multiple identity (Cielo portatile #3, 2020), and the four photo collages by Mariagrazia Pontormo, who portrays the sky too, telling the liberation of Berlin from the wall in November 1989 (I cieli di Berlino layer #10; #11; #12; #13, 2015). The blurred pastel powders by Ettore Spalletti (Senza Titolo, 2015-2016), evoke through ten elements a rhythmic succession of emotions, with shades that suggest changing scenarios.

The phenomenology of the sublime by Pamela Diamante starts from the variations of the ‘pietra paesina’ to describe in the two prints the frightening and magnetic grandeur of the sea and its waves, which crash on the rock creating imaginary stories. Halfway between story and reality also the work by Myriam Laplante, winner of the career award, in which nature and landscape appear to us as heartbreaking habitats, the polluted Tiber that the mutant mermaid cries sitting on the shore, or the creepy woods made hunting theater. Delfina Scarpa transfigures them, and her fluorescent shades describe fairy places suspended in time, where there is always light and beauty (Senza titolo-Sempre Ninfa, luogo a me caro-, 2021). The three windows in the print of Marina Paris bring us back to everyday life, we enter inside the geometric structure of the room catching details and perspectives, traced by the bright silhouettes on the floor.

Sol 2081 by Leonardo Petrucci (2019) is the winning work of the Michetti prize: the artist reproduced in the fabric the photograph taken on Mars by the NASA rover Curiosity, by using a handmade carpet made in India and finished with the carving. The work becomes part of the collection of modern and contemporary art of the Michetti Foundation, thanks to its ability to generate a synthesis, between an object symbol of anthropological traditions and a vision for the future.

Michetti, Spalletti and new landscapes with or without figure collects landscapes that represent questions, investigations and interpretations of the artists, which created a plurality of references to the works of Michetti and Spalletti. The two landscape definitions are actually much extended concepts: the figure can be physically present or be only implied, alluding to the viewer himself. Leaving the boundaries of simple categories, they therefore reach the sphere of the soul and of the collective feeling, of the contrasts between true and false and of the intricate contemporaneity. 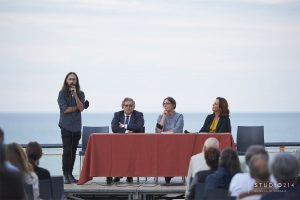 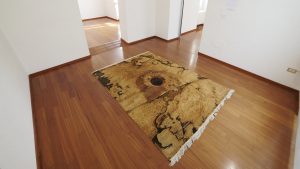 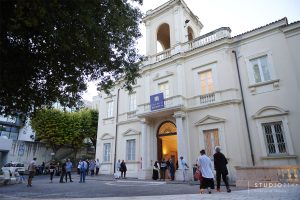