Ceramics in Japan is an ancient story. Uninterrupted and, in many ways, unparalleled: not so much for the beauty in itself of the object that is produced (undoubtedly, for those that are the western canons, in Italy, China and in the Islamic countries, they produce even more wonderful ones) but as for the ability that they seem to have, from the depths, to transmit not only visual sensations but also purely tactile sensations. Roughness, refined imperfections, asymmetries are meticulously desired: beauty, according to the aesthetics and vision of wabi-sabi, must be imperfect, absolutely impermanent and incomplete.

So only “if an object or an expression can bring about a feeling of peaceful melancholy and spiritual ardor within ourselves, then we can say that the object is wabi-sabi” (Andrew Juniper). Simplifying (but really simplifying a lot), the concept could also be expressed as… a sort of necessary “sad beauty” or, better, of “austere beauty and, almost sadly, closed in itself”.

Mokichi Otsuka (Tokyo, 1956), after completing his studies (degree and specialization in Painting), moved (1994 -1999) to Italy and deepened his course of study by graduating in Ceramic Art at the National Institute of Art and Ceramics, G.Ballardini of Faenza. Then he returns to Japan, where he currently lives and works, even if, since then, he finds a way to return to Faenza every year for a few months. With assiduous and passionate work he becomes one of the most appreciated ceramists in the world.

His works are preserved in multiple public collections: from the Victoria and Albert Museum (UK) to the MIC, the International Ceramics Museum of Faenza, from the Tito Balestra Foundation, the Italian Museum of Modern and Contemporary Art, located on the premises of the Malatesta Castle in Longiano at The National Museum of Modern Art in Tokyo. And moreover at The Museum of Ceramic Art (Hyogo), at the Takasaki Art Center College, at the Takamatsu City Museum of Art and many others.

His latest exhibition “Cats and tea bowls” (but also with some small paintings) was set up in the refined spaces of the Shibuya Kuradatoen Gallery in Tokyo (one of the best in Japan, specializing in modern ceramics). The artist says: “I was, and still am, fascinated by the art of ancient Greece, by the Etruscan and by the sublime one of your Renaissance. I felt a strong urge to embark on a path that could allow me to relate the two souls, the western one and the Asian one”.

He tells us that shortly after his return to his homeland a serious illness (today, fortunately, eradicated!) manifested itself during a trip to Nepal and led him almost to death. This touched tragedy was the detonator for the opening of new horizons and new experiments. That having been one step away from death, having faced that moment by addressing, thanks to his Buddhist faith, attention and care above all to the inner part of his soul, with time, patience and positive thinking, the having healed her body has also given new life to her way of making art. As in a rebirth, new perceptions and a new desire to explore them were found. He understood that his art had to be placed in the middle.

Between East and West: search for Beauty, therefore, but with that touch of graceful imperfection, a small “crack” which, in the end, is the one that lets light pass. Between accomplished and unfinished, between life and death, between black and white, between light and shadow, between full and empty.

His is an asymmetric symmetry, an imperfect perfection permeated with Sacred and Harmony where Ethics and Aesthetics are in ecstatic symbiosis.

Like his cats, dotted with solids and voids, which seem elegant and supple, even if fixed in static pose, with life. Like its bowls, the chawans, for the matcha (and therefore for the tea ceremony) that when grabbed with two hands to drink transmit strong inner vibrations. Touching these objects, turning them around in your hands, possessing them not only with the eyes but also with the touch, is to penetrate the circularity of space and time: ultimately it is completeness. 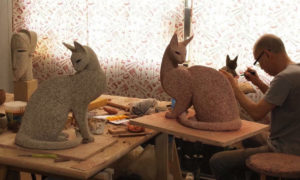