The vision through by Flavia A..

Daniel Buren in Mexico, at Gal..

Unparalleled and out of the choir: Dieter Roth, Al Hansen, Jean Toche and Roberto Paci Dalò are the artists involved in this year’s exhibition programme conceived by Giuseppe Morra, a time path made up of advances, backtracks, setbacks and movements inspired to the Game of the Goose, a pastime full of meanings which inspired the symbolism of the numbers at the base of works and artists. After a four-year break, the game resumes and Casa Morra is enriched with the setting up of new rooms dedicated to Roth, Hansen and Toche. United by their independence from the artistic movements, by their revolutionary action, far from the single thought with which even today’s society and the art world have to deal, they escape from any classification, remaining precisely “Unique”, anchored to their own artistic and existential research.

The curator Manuela Gandini imagined the rooms dedicated to them as a human “Third landscape”, different to the one theorized by Gilles Clément; in fact, their art comes from interstitial spaces, non-functional places compared to the canonical ones of the art system, which however open up new possibilities for regeneration and creativity.

The “worlds” to which these three protagonists of the art from the second half of the twentieth century give shape represent the counterpart of the dominant artistic languages from this period, revealing the darker sides of mass society. The Dadaist approach is very present in all of the three, the objet trouvè, the residue enters “already ready” in the work of art, as it happened in Kurt Schwitters, the Dadaist who mixed art with everyday life. The bond with Pop Art is also tight, although in their works it is not to be represented a double of the consumerist world, but the hidden, less glossy aspect, the refusal that allows to disillusion the addicted eye.

The trespassing between art and life is clear in Dieter Roth’s work, whose messy archive is proposed again, the archive he created at the end of a dinner in Cavriago in the stable of Rosanna Chiessi, the gallerist and point of reference for Urs Lüthi, for the artists of Wiener Aktionismus  and for many others belonging to that generation. The most varied objects such as maps, forks, labels, Polaroid photos, drawings, everything that can be reduced to the surface, are fixed on the walls of an immense room in Casa Morra, a real cabinet de curiosités.

It is what remains of the story of an evening, moments of life spent and shared among artists and protagonists of the artistic world in the Seventies. The art, therefore, as a lived event to be shared with the public which gives rise to the obsession with blocking every small event of that continuous flow that is life. Roth loves things that deteriorate, that experience the fascination of decomposition, for him even memories are destined to fade, just as food and objects. Everything is placed in relation to the photos of the set-up at the Chiessi stable. The temporal deviation leads the viewer to question the concept of duration and decomposition.

Perceiving life as a continuous flow is also the spirit that animates Al Hansen, among the three artists, he is the one most linked to the Fluxus movement. The accumulation and the obsession with the rediscovered object dominate his artistic practice, but, at the same time, are intertwined with a vision closer to Pop Art. Like a flow, art is an unstoppable movement where the daily life becomes the main expressive material from which to draw.

Al Hansen’s works were born “on the road”, incorporating materials taken from the ashtrays in the bars and from the sidewalks. This is how his collages and assemblages were created. An example is represented by the Venus exhibited at Casa Morra, obsessive silhouettes that reproduce a two-dimensional version of the well-known Venus of Willendorf. The female body appears shapeless, reduced to the surface, colored with Hershey’s chocolates’ papers, or reassembled with matchsticks and rolls of toilet paper. Beauty is exhibited together and through its reverse. This is the other side of advertising, of the star system, of the entertainment society.

Al Hansen’s imagery is also inspired by the history of the United States, such as the Native American question. On display is the series A visitation of Fantoms, plaster casts of the artist’s face appear on the surface of circular plates and combined with the traditional symbols of the Natives of America, such as headdresses with feathers. There is alsoJoe Beuys flies Al Hansen Jumps, a tribute to Beuys who, like Hansen, participated in the Second World War.

Less ironic and more pungent is Jean Toche. Stronger in him is the bond with the mass media, with information that runs fast and that anesthetizes. The news that follows one another seem to flatten us, to make us insensitive and uncritical, for this reason Jean Toche, by associating word and image, tries to provoke the viewer, urging him to disrupt the lie, the falsity through which one can be manipulated. His self-portraits associated with comments on articles in the “New York Times” represent, through the deformation of his face, the reactions to the extrapolated news concerning the misdeeds of the American empire, the references go to Bush’s policy and to the various military interventions carried out by the Americans.

The exhibition was inaugurated by the sound performance entitled “Niggunim” by Roberto Paci Dalò, who has recreated a “Teatro dell’Ascolto” with tapestries and carpets made by the artist with Qabbalah motifs. 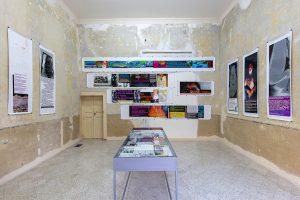 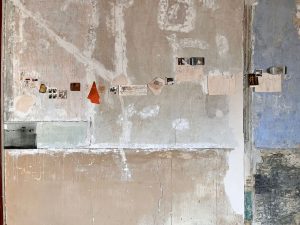 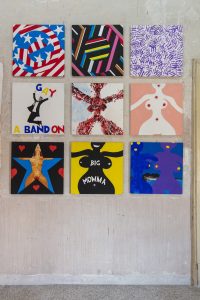 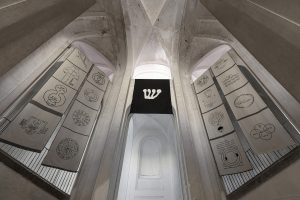