The Ravenna-based artist Nicola Samorì fears death and the decay of faces and bodies and tells us so without too many mysteries, while trying to probe the unknowable, especially in relation to the sacred. On the other hand, if it were not dark, it would not be either sacred or divine. Samorì offers visitors a black monolith that constitutes his artistic production, made up of concepts and symbols from Baroque and Realist art, especially Spanish and Dutch, which are transformed into hyper-realistic figures that act as new models, because disease, decay, deformation, are tools for knowledge, a mystical practice, a vanity, from which no one escapes. The artist, like his creatures, sometimes feels comforted in thinking about himself as an involuntary man, therefore innocent, who paints and sculptures so as not to forget, because death, as Seneca said, always threatens, it is a present that at every moment conquers a larger portion of us. Samorì, focusing on the sacred as an ambiguous concept and on the unrepresentable, develops his art starting from the icons of the history of art, probing them, “profaning them” but paradoxically without disrespecting them: a material transformation is taking place that reveals us how the transcendent can escape us, not have a reassuring face to rely on, because we human beings often let ourselves be voluntarily enveloped by darkness, drowning in depths that we hope are suddenly illuminated by the light that we will see. There will be images of wonder that will be removed from our eye, it will be the triumph of the sublime that dialogues with death and with the cosmic darkness; because basically, as Bernanos said in Diary of a country curate, “Everything is grace”, even when darkness becomes a word.

Nicola Samorì is currently the protagonist in Bologna of the Sfregi exhibition, his first anthology in Italy promoted by Genus Bononiae. Musei nella Città and curated by Alberto Zanchetta and Chiara Stefani that, when the museums reopen to the public, will be open to visitors at Palazzo Fava until 25 July 2021.

Annalina Grasso: It’s said that you whip sacred and mythological images, because basically we whip the sacred in this secularized time. Actually it seems you want to show that the image we have of someone or something, can escape us and be elsewhere, while what we see is a simulacrum.
Nicola Samprì: I whip the painting to see it bleed, because I consider it like a body that is treated as an anemic organism, while it is not at all. The images and their narration are functional to this staging which needs the metaphor of the flesh to make itself unequivocal: when I physically flay the skin of Saint Bartholomew I am no longer representing a Saint tortured by an executioner, but I present a physically skinned body, a body that I carefully composed and then investigated with a knife.

Can we simply assert that you paradoxically want to show our impossibility of seeing what we think we see, especially in reference to Christ, which image, concept, question that disturbs us and escapes us because otherwise it would not be God?
I asked myself the question of the unrepresentable, of the mystery, of the miracle. Since I am not up to drawing the prodigy, I have chosen to entrust its formation to chance: this is why sometimes a natural cavity in the stone or a lagoon carved by sulfur on the oil painted copper opens up in correspondence with the risen Christ. The writing of the stones, as well as a chemical reaction, release a marvel of which I would not be capable. But without a frame of meaning drawn by me these natural occurrences would be almost illegible.

Do you believe that you speak a universal language, that you are comprehensible to the learned and the non-learned so that they can rise to the understanding of the divine?
No, I don’t think I have the code of a universal language, but I draw signs that speak to many, which can also override the culture of belonging and the faith of the individual. Does the sense of mystery cause more suffering or fascination? I am fascinated by it. If an image is not charged with mystery, it is condemned to be irrelevant and confused with millions of others.

Do you plan to make sacred or religious art? What is the symbolic content for you that was the basis of Christian culture from the early centuries up to the Middle Ages?
I aspire to create images capable of evoking the sense of the sacred, something difficult to encode, which slows down the pace and which can lead to contemplation. For me, sculpting or painting is similar to meditating, similar to praying.

Do we apparently have to “mock” the great masters of the past, to better understand them, in short, avoid acts of veneration and fear of being irreverent, but rather digging into their “underground”?
For me, copying is understanding, and sabotaging a code means putting it in crisis with the injection of the vision of posterity. What would have happened if Bronzino had visited a De Kooning solo show? Maybe a few are interested in this aspect, but the clash of the ages on the same body can open fruitful cracks.

The Sermon on the Mount, taken from the Gospel according to Matthew, has become an artist’s book with the words commented on by your images. Don’t you think that many times words are enough in themselves, especially those of the Gospel? Doesn’t the sacredness of life pursue the sacredness of the Word?
I borrow a title from Gino de Dominicis: “In the beginning it was the image”. For me the word does not come before the image and the strongest moment of the Gospels is an image: the Cross. At the time of the work around the Sermon on the Mount I did not try to comment on the word, but to sow it with images that flowed from the density of the verb. Of course the Sermon is quietly enough on its own – and so it has happened for many centuries now, so much so that the representations of this Gospel episode are few – but it is also true that the images I created could peacefully exist without the crutch of the word.

In Corpus Domini it is evident how you want to fill the classical tradition with bruises, making the three figures appear like wrecks. Is artistic transience the comet of the twentieth century in which one must somehow survive the centers of power?
Tradition, as you call it, is a legion of bruises. Just think of the Gothic crucifixes, the Flemish ones or the Spanish Baroque statuary. Holbein goes from swollen to ivory, Donatello goes from skin perfection to emaciated. I would make the bruises appear where they already are. And then Corpus Domini presents an unpublished iconography, where no Saint Joseph appears: Mary has the dead body of her son in her womb, from whose belly a Christ child gushes. Art is like Venice: it will never stop rotting.

What place do the memory of childhood, the period in which everything seems bigger and full of Grace, have or could one day have in your production?
What I do today is the concrete reverberation of childhood fantasies that I have never stopped taking care of.

The whole of the twentieth century has committed crimes for good purposes, this century, dominated by the Baal of technology as Dostoevsky said, must be crossed to the core to understand how much art has become desperately exaggerated, deadly and at the same time thanatophobic?
Art has often been, in recent centuries (indeed, for thousands of years I would say), exaggerated, deadly, thanatophobic. Isn’t a pyramid exaggerated? Isn’t a cadaver monument deadly? The twentieth century is only the century closest to us, the century in which you and I came into the world, and it is easier to put it on the index.

You are preparing for an important exhibition in Bologna: what do you expect from professionals and visitors? What were the main difficulties in relation to the restrictive rules?
I have no expectations; I imagine that the reactions will be in line with those observed in recent decades, from disgust to admiration, passing through the classic postures of many professionals who dismiss my case with an “obsolete”, “academic”, “mannerist”, “necrophilic”. For some, including myself, it is an opportunity to read the strength of my path over the decades, governed by an obsession with form that has nothing to do with an idea of ​​style progress, but with an attention to the artwork as an organism that does not need the concept of series to find value. The greatest difficulties in producing an exhibition in a physical space at the time of the disease are related to the fact that the project is built to free the works from the prison of the virtual and for a long time one finds oneself being the only living body plowing through those rooms. 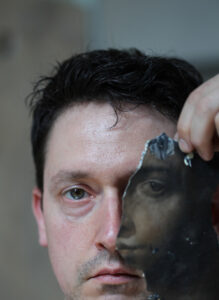 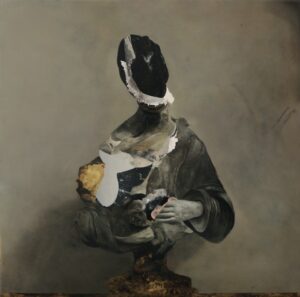 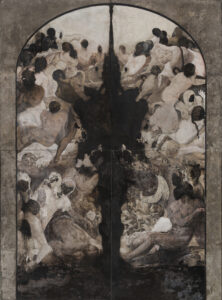