What is a work of art? Material visions? Perceptual experiences? There is no exact definition. The artist Gaia Scaramella explores and expands this concept: common and uncommon objects are used by her, regenerated by a new skin to create experiences. Until 17th June, Studio Stefania Miscetti, in Rome, presents Officine emotive (Emotional workshops), a solo exhibition of the artist. The curators, Veronica He and Pia Lauro, together with Gaia Scaramella, have granted Juliet Art Magazine an interview!

Claudia Pansera: I would like to start our interview with a simple question, which you may have been asked many times, which can also be insidious. Who is Gaia Scaramella?
Gaia Scaramella: This is definitely a tricky question, one that I have actually been asked just a few times! Gaia Scaramella is a baby girl born in 1979, from a triplet birth. Four sisters, a housewife mother and an accountant father. Happy and noisy childhood. Large and feminine house. Rebellious character, whimsical and nonconformist, already developed at an early age. I have been so many things in my life, that I often have the feeling of having had more than one: the last one sees me in the “role” of a wife, a mother of three children, and an artist. Probably art has always been my only faithful and never betrayed companion. I feel like a free artist, free to use many techniques and themes. I feel young, I will probably always feel like a young artist.

Often art historians and critics, in trying to read a work, misunderstand the artist’s message. However, when I visited the exhibition Officine emotive, accompanied by the words of Veronica He and Pia Lauro, the meaning of the exhibition immediately seemed clear to me. Therefore, I would like to ask you first of all to tell us why Studio Stefania Miscetti chose to host Scaramella’s exhibition and how the exhibition project was born.
Veronica He e Pia Lauro: We are bound to Gaia by a relationship of esteem and friendship that we have cultivated over the years: in particular, Pia had already collaborated with her about ten years ago, in the context of the Almost Curators project, involving her in a talk for the Set Up fair, in Bologna. It was natural to invite Gaia to take part in another exhibition we curated for Studio Stefania Miscetti: the group show Babies Are Knocking, which last year saw forty-six artists confronting the imaginative thought of children. On that occasion, Gaia presented a small assemblage on paper entitled Space Sub School (cercandoti), which already showed some of the elements that you will be able to find in the exhibition: photographic memory, collecting, mixing of materials, and her sense of humor. That day also introduced us to the diverse world of her latest productions, numerous series consisting of equally numerous works, scattered in a studio of disarming vitality. We clearly remember exchanging a glance at the end of the studio visit thinking: “here there is an exhibition”. Stefania Miscetti generously accepted our proposal, supporting us during the whole process that led us to the creation of the final work. The project is based on some cornerstones: the respect for the artist’s creative process, which has resulted in the exhibition of the series and not of the individual elements that constitute them; the willing to give breath to the choral nature of the artworks, which led us to present only three unpublished series; the desire to show a selection of works linked, in our opinion, by a red thread, the relationship with the other as a constitutive element of the self.

The exhibition Officine emotive presents three groups of works, all created during the last year. The evident seriality, however, gives rise to different levels of reading, which can be declined by the user in intimate and personal readings. However, the numerous elements, although of different nature, could present some assonance. What do these works express and what kind of reflection is behind them?
Gaia Scaramella: The series (so defined by me, because I consider them as works in progress) chosen for the exhibition are made up of numerous elements, which certainly open up different keys to interpretation for the viewer, it is true. The artist provides his own, but in full contemplation of the cultural, personal, intimate and emotional background of the viewer. In the case of Concerto per Archi (Concert for strings), an artwork composed of bow saws, deprived of their blade, hold and stretch a fake string of pearls. The aspect narrated in the artwork is that of the tension created by the two elements, the bond and the balance between our masculine and feminine side. The two elements collaborate in their function, static but vibrant. In Senza Termine (Without end), the relationship is maternal, and the addressed theme is that of the interrupted relationship. The eyes of the mother, painted with bitumen, become small shrouds on the neonatal “shirts of fortune”. It is the photograph of a gesture of pain and devotion of the mothers who wear their children’s clothes on their faces, as if to feel their smell, their pain. The title has a double reference, the first one concerns the absence of an exact term describing this female condition, the second one underlines the painful permanence generated by this kind of detachment. The eyes represent a choral cry, a gesture repeated many times. The eye as the symbol of creativity and self-healing at the same time. The gaze of the mother is the first relational contact of the child, and in this case also the last. With Inclinazione naturale (Natural Inclination) is the installation, instead, that dominates the exhibition hall: it is an artwork about the verbal conflict between the parties. The mouths of the photographic portraits are always censored, covered by branches for the men, and nests of wasps, hornets and bees for the women. These elements are conceived as real three-dimensional “comics”. The choice of the branches is not casual. The design of their branching must be treated and imagined as a written text that crystallizes and materializes in the air, where it remains. The feminine response with the nest, must be taken as defense and care of the house, of the family, a dangerous, risky, prickly house at the same time.

I have read that, for you, seriality means echo and rumble. Does this seriality, which causes resonance and punctuates concepts well, only address to the public or does it represent a personal fundamental step in the construction of the works and their meanings? Briefly, do you need it to introject what you are making?
Gaia Scaramella: Both things for sure, repetition is obsession, redundancy, rhythm. In some works, more than in others, it was certainly a necessity in the elaboration of the faced “problem”. I’m referring to Senza termine, in this case, where the painting of these eyes was for me a tiring elaboration of mourning. While for Inclinazione naturale, for example, the repetition was absolutely functional and almost condominium.

I don’t want to ask you explicitly why you chose Officine emotive as the title. Rather, I would like to ask you, don’t you think that the broad and complex scenario you propose may be subject to too many interpretations? Aren’t you afraid of being misunderstood?
Gaia Scaramella: No, I am not afraid of being misunderstood, I find all this highly democratic, as I explained above, I intend to provide a “canvas” in the reading of my research, everything else, the reading of others, is often enriching for me too. In this period, I have been confronted with many people, I have seen the most disperate reactions in front of the artworks. Who am I to say that this is not the case? Let me mention Così è (se vi pare) by Luigi Pirandello. “On the unknowability of reality, of which everyone can give one’s own interpretation that may not coincide with that of others. This generates a relativism of forms, conventions and externality, an impossibility of knowing the absolute truth”.

You expose pain and truth in a disarming way. What we see, is it about you?
Gaia Scaramella: Also, yes, but about the collected mistakes too.

Do you consider yourself an artist by vocation or by necessity?
Gaia Scaramella: I consider myself an artist as a matter of fact. I find the word “vocation” too catholic for my chords, and “necessity” too therapeutic.

I would like to end the interview by leaving the word to Veronica and Pia. How would you define Gaia Scaramella’s exhibition with one word or in a few lines?

Veronica He e Pia Lauro: In Officine emotive Gaia enacts a lucid and concrete representation of the emotional relationships and, if on one’s hand she leaves no escape to the emotionality of each of us, on the other hand she reminds us that in the encounter and the clash with the other is enclosed the essence of knowledge and self-awareness. 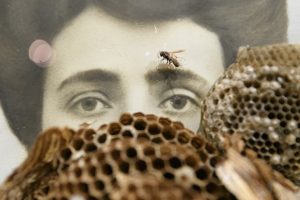 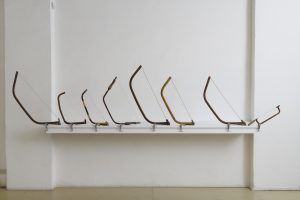 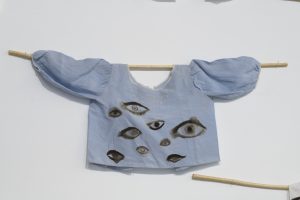 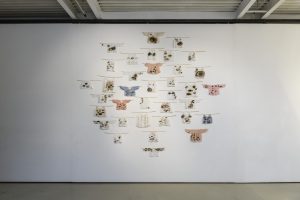 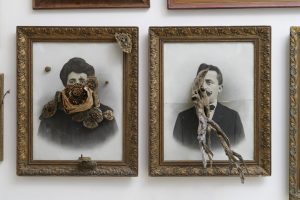 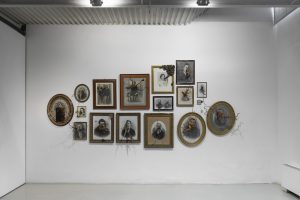 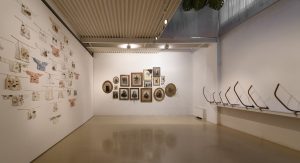