Among the many events that opened in Venice on the occasion of the 58th edition of the Biennale, we point out an exquisite cameo, the video installation / performance Carousel de Crystal by Pablo Bronstein, a lagoon outpost of a larger exhibition currently underway at OGR (Officine Grandi Riparazioni) in Turin. In the evocative setting of Sala della Musica in Complesso dell’Ospedaletto, an hypnotic carousel with a harpsichord sound will be staged throughout the Venetian event, incorporating the baroque architecture of the building, reviving its elegant atmospheres, hybridizing them with ancient disturbances and contemporary anxieties .

Since the beginning of his career, Pablo Bronstein (born in Buenos Aires in 1977 and London based) focuses his research on an original intersection between dance and architecture that starts from drawing, an expressive and analytical tool able to activate the symbiosis between real spaces, imagined narratives and symbolic allusions. Design and dance have for the artist the same quality and elegance, they are tools that have the power to immediately communicate complex mental representations summarizing their essential features. The drawing is therefore the demiurgic instrument through which the artist circumscribes settings and stories that will then come to life in his installations and performances.

Carousel de Crystal stages the dynamics and fascination of voyeurism, of looking and being looked at, in the form of a cruel fairy tale, establishing an original parallel between the decadent vanity of the seventeenth century and the obsession of self-representation that marks endemic narcissism in the post-iPhone era. Mixing fictional and historical memories, low-fi technologies, kitsh delicacies and hyper-contemporary aphasias, Pablo Bronstein traps his gaze in an intriguing visual and conceptual labyrinth in which the artifice (always ostentatiously declared) succeeds in awakening childhood fears and atavistic fragility.

The sequence begins with two dancers, whose mirror movements are multiplied to infinity by a video projection used as an interactive theatrical backdrop. They interpret a choreography born from an amalgam of styles ranging from the 16th to the 18th century. The simple musical cadence that accompanies their steps supports the slight tension of their supple, relaxed but precise bodies in designing elegant trajectories in space. The loop of this idyllic scene captivates the viewer who begins to introject their harmonies by comparing them instinctively with the baroque triumphs of the ceiling almost to empathize with a seventeenth-century courtier engaged in the private rituals of a royal alcove.

As the scene unfolds, always similar to itself in its codified artificiality, an unnerving and inexplicable sense of expectation is created, aroused by minor agreements and an enigmatic video projection inside a pompous frame that shows a powdered face in the act of rolling its eyes. This apparently marginal character represents the Gray Witch, a visionary personification of the metal plate that is hidden behind the reflection of the glass of each mirror and that becomes visible only when the mirror breaks. And the traumatic event eventually happens: the carousel abruptly stops and the witch materializes herself as a black silhouette that annihilates the previous vision, suspending its rhythmic scanning and balance.

Her appearance, threatening but at the same time also cathartic, establishes a new provisional order of things: at the sound of a symphony orchestra then appears the same Bronstein with his face painted red who dance with sophisticated but wild movements, eluding both the cold surveillance of the Witch and the ritual cycles of the dancers. Then everything starts anew as if nothing had happened and this is perhaps the most fascinating aspect of the performance that stages an impossible coexistence of existential levels concomitant in their apparent lack of communication. This short essay confirms the artist’s ability to develop a multifaceted performative language capable of establishing an innovative relationship between architectural installation and dance staging with an unmistakable style that traverses history and post-modernity with an ironic and critically approached approach aware. 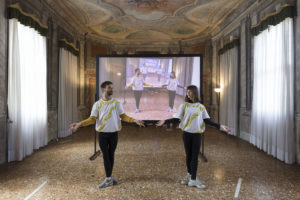 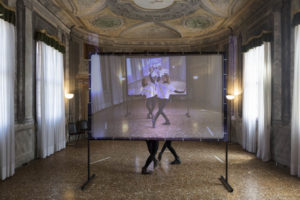 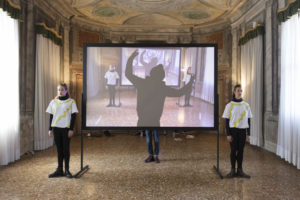 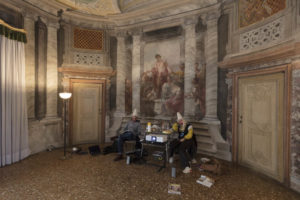