Paludi by Giuseppe Agnello at La Verde la Malfa Foundation. When matter penetrates artistic thought with a message of metamorphosis

In San Giovanni la Punta, a small town near Catania, the La Verde La Malfa Foundation- Parco dell’Arte was established in 2008 by the will of Elena La Verde, born in 1933. Versatile and passionate artist, she expresses herself in various forms from poetry to painting, sculpture, graphics, photography and installations. The latter, 19 in total, are today protagonists in the Art Park of the La Verde La Malfa Foundation, works that take it out of the traditional canons and soon include it in the schedule of women Sicilian revolutionary artists.

Elena La Verde passed away in May 2012, leaving a space for contemporary art and above all an experimental place of promotion, continuous research and protection of the local cultural and artistic heritage, making the Foundation one of the most visible Sicilian contemporary realities at national and international level.

And it is precisely in this space, that the “Paludi” exhibition by the Sicilian sculptor Giuseppe Agnello was inaugurated to the public on June 22nd in the exhibition hall of the La Verde Foundation La Malfa – Parco dell’Arte. He studies and investigates nature, a source from which to draw to extract thoughts, concepts and forms to give life to his art, using natural elements above all (”Paludi” exhibition curated by Daniela Fileccia, promoted and conceived by the president of the Alfredo la Malfa Foundation and by Dario Cunsolo, with the patronage of the municipality of San Giovanni la Punta (CT) and the Academy of Fine Arts of Palermo).

Giuseppe Agnello was born in Racalmuto, near Agrigento, in 1962 and attended the sculpture school of the Academy of Fine Arts of Palermo, graduating in 1985. He is currently Professor of Sculpture and Sculpture Techniques at the Academy of Fine Arts in Palermo. He has made several public works both in Italy and abroad; he is the author of the famous bronze portrait of the writer Leonardo Sciascia, located in his hometown, and of the bronze sculpture dedicated to the famous Commissary Salvo Montalbano, a character created by the writer Andrea Camilleri, in Porto Empedocle.

For the exhibition at La Verde Foundation La Malfa Agnello presented works belonging to the most recent production, some of these works-installations, united by the matter and specifically the ‘calcareous-cementitious’ material with the aim of referring to the process of fossilization.

The “Paludi” exhibition thus marks the fossilization of humanity that finds itself in a continuous state of immobility and material and psychological fragility.

In the past the artist has worked on a very precise process of ”metamorphosis”, a process that inevitably marks the movement, but now with Paludi Agnello wants to tell us about a humanity that has fossilized in a condition of fragility and emotional weakness that prevents the reaction.

Bodies, in which matter and color become the protagonists of a message, which become cocoons, in a state of fossilization that is perhaps the greatest wish for better times, for a humanity that can respond-react and return to its origin; bodies of stone, heavy bodies, already starting from the head, from which ideas start, heavy for the discomfort of a humanity that does not act and permanently loses the human form: reality clashes with surreality.

M.S Let’s start with ‘Paludi’ in which nature is the absolute protagonist of a process that sees this as the basis of inspiration for every form of art. How did the chosen subject succeed in penetrating your thought so that every single sculpture came to life?
G.A. Now I think I have acquired some experiences, even on a technical level which, following all I think, I can find an implementation solution. Usually I start from a vision that is the driving force of a project, then I begin to experiment with materials that help me to achieve the goal, and as I develop the practical work of the choices more suited to the original idea that is in my mind, I just try to materialize it. But in this passage I am never rigid, I often change in the various aesthetic checks. Sometimes the idea is ripped off in different forms or compositions, as in the case of “Paludi”.

How has the concept of metamorphosis helped you develop the path of ‘Marshes’?
Nothing arises by chance, every project springs from a previous vision, and it is all linked. In 2013, in one of my exhibitions at the Carlo V tower entitled memories / side and oblique views, the metamorphosis characterized the works on display. Some have identified references to Ovid and Bernini, for me metamorphoses are an almost surreal plastic choice to tell the introspection of today’s humanity. So charcoal, grafted carbonized trunks that came out of the head or lush vegetation are symbolic elements. In the exhibition projects “Dalle Dure Pietre” at the Archaeological Park of the Valley of the Temples in Agrigento, however, I told of human introspection, although the sculptures were made of casts of acanthus buds and sunflower seeds, without the use of the body and metamorphoses. “Terra in Moto” at the Taormina-Naxos archaeological park was a journey into the energy of the movements of men and nature. From these assumptions comes “Paludi”, where time stands still as in a pond, the beginning of a state of fossilization.

On what other artistic occasions did you succeed in creating the union between man and nature and how?
As I said before, mentioning my previous exhibitions, the combination of man and nature is always there even when the body is absent. I am not very interested in telling about the union between man and nature, even man is nature, I am more interested in telling about a tired humanity with the use of natural symbolic elements (acanthus buds, ferla flowers, etc.). The reasons for the choice stem from my relationship with it, because as I have already said in other situations, I have a rural background and my language is contaminated by my experience.

From the static nature of man to the mobility of nature. Do you believe that the two actions today can also dialogue outside of art?
It is everyone’s hope, and hope in art is always present even when the problem is cruelly told, a more environmentalist conscience is needed, beyond economic interests.

When can aesthetic beauty give way to the message to be told?
In my opinion, I don’t always like to tell messages, and whenever I am invited to do so, it embarrasses me a lot. It’s always very simplistic, it’s like telling a movie or a book. I prefer long silences in front of a visual work. 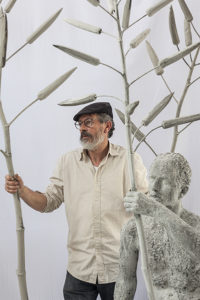