In line with the theme of the 2022 Venice Biennale, the European Cultural Center confirms its catalyst role in the heterogeneous and complex contemporary art scene. Standing from the positioning of a female curatorial collective, the show Personal Structures – Reflections aims to solicit significant considerations that not only value the aesthetic and transmissible power of art, but more significantly, they draw from the meditative and imaginative power of images. Celebrating the works of emerging artists alongside established figures, the exhibition takes place in three distinguished historic locations such as the Mora Palace, the Bembo Palace, and the Marinaressa gardens, giving emphasis to material, technical and technological experimentations that overall aim to infuse confidence and hope in the future.

At the Mora Palace, the two site-specific installations art+faith+farth and all we need is fides by the new artistic collective ([{Collective resonate as a statement by questioning the role of faith and religion in the digital era through the language of light-art. In a similar way, with the work Metamorphoses, the artistic duo Concept2048 elaborates a personal study of artificial light and color in relation to perception, an invitation to grasp the renewing intent of the exhibition.

The plot that supports the curatorial design is admirable. Like an ancient tapestry, the show holds up the image of a landscape where different cultures and knowledge overall merge. At times, it is a landscape that looks toward Easter countries, such as in the melancholic artworks by Oh Myung Hee, in the sublime visions by Calvin Teng, or in the digitally processed apocalyptic ones by Mizuho Nishioka, all searching for a new possible harmony between humans and the environment. Other works are meant to be understood as intimate landscapes, such as in the vibrant surfaces by Corine van Voorbegen, and in the abstract and expressive visions of Nemanja Nikolic’s painting, which all investigate the relationship between landscape, vitalism and perception. Looking at Western countries, on the other hand, artists suggest a reflection on human fragility in relation to nature as seen in the organic complexes by Andrea Vnkovic and in the pure essentialism of Jacques Jarrige’s sculptures which propose a reflection on the individuality, the double and the multiple. These are reasonings that, in conclusion, address a possible future frontier for artistic research as suggested by the complex installation curated by Superchief Gallery NFT, in which digital works delineate the possible next horizon for human imagination.

Differently, at Palazzo Bembo, these themes seem to take an anthropological viewpoint. This can be perceived firstly in the room curated by Galerie Myrtis, which display a series of works inspired by the Afro-Futurist Manifesto: Blackness Reimagined through which one can rethink the contribution of black art in terms of identity, memory, representation, and ancestral archetypes.

This follows a pause of reflection on the eternal dialectic between the spirit of individuals and the spirit of time, as evoked by the surreal installation Moment by Donald Martiny, which transport us to ancient and new cosmogonies, as if living in an eternal vibration. Although with different mediums, as highly sophisticated, Carrie Able seems to move along a similar line with the installation Dall’Anima (of the soul) where she combines painting with virtual and augmented reality techniques within the dimensionality of the metaverse.

A relentless succession of monographic rooms then announces the return of painting: the depth of Andreas Luethi’s paintings acts as a counterpoint to the cosmic landscapes of Geraldine Ondrizek and Dr. Takahashi’s work, reaching the virtual views of Georgii Uvs & Ellen Nash with the work Mesozoic. Let’s start over!, and finally culminating with the spiritual and ancestral feeling of the work Kveinga – Angels of the Ocean by Mahiriki Tangaroa, evoking the distant landscapes of Polynesia.

At the end, a tribute to Venice is expressed in the installation Borders of Light and Water by Deanna Sirlin, a visual metaphor that deals with the refreshment of light on the surface of the water. The exhibition itinerary ends with the sculpture Spark of Life, by Ana Huberman Lazovsky, which gives tangible proof between spiritual and human forces as if in a timeless dialogue, which is reaffirmed by the painting Pendulum of time in the timeless eternal, by Murielle Argoud, that dwells on the processes of metamorphosis and alchemy, as a modern memento mori. 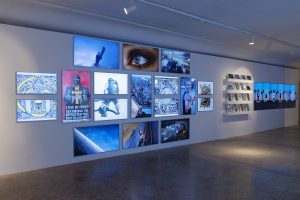 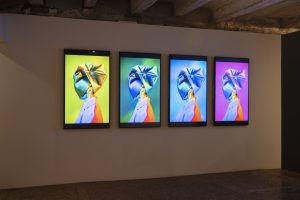 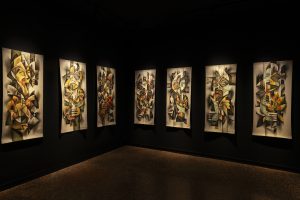 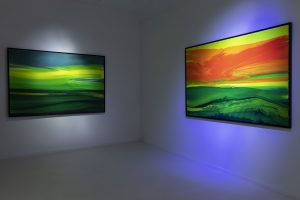