Fall, the latest exhibition at..

In Japan, sabi is everything that lets itself be crossed by time: an ancient object, a rock covered with moss, a withering flower. Hiroyuki Masuyama returns to Studio la Città in Verona for a solo show that places the floral element at the center of his new production. A language, that of flowers, which is emblematic of the concept of cyclicality and impermanence, which invests everything that exists.

The reflection on time has been central to the Japanese artist’s work since the late nineties when, relocated to Germany where he still lives and works, Masuyama began to visit the parks of Düsseldorf daily with his camera: moving to the side one degree further every day, he captured 365 shots and at the end of the year he superimposed all of them, so as to condense the whole time into a single wide panoramic view of the park that would convey its changeability throughout the seasons. From the very beginning of his production, Hiroyuki Masuyama used the technique of photographic superimposition as a tool to testify the passing of time and to attribute this inexorable flow a spatiality. By expanding the visual field, the digital post-production process of the shots, besides transmitting a plural vision of reality, raised interesting considerations about the intrinsic potentialities hidden within analogical reality itself.

In the new series of works exhibited in Playing with Shadows, the artist leaves aside the macro of the broad panoramic views in order to focus on the micro of the floral element and crystallize it in all its shimmering fragility. Remaining faithful to the superimposition, he does not completely abandon the photographic medium but combines it with the tracing paper. With a keen eye Masuyama spends weeks observing dahlias, peonies, lilies and tulips and records their life cycle by tracing their shadows every day on a different layer of tracing paper until they wither; he then manually superimposes all the layers, dating them one by one so as to condense all the vital phases of the plant onto a single support.

Although the passage of time has been the subject of the research of various Eastern and Western artists in the last decades, from Roman Opalka’s numerical sequences, to On Kawara’s Date Paintings, to Tehching Hsieh’s performances, in the case of Hiroyuki Masuyama the investigation on time does not resolve in a mere chronology but instead it acquires a corporality. In fact, the overlapping layers of the tracing paper give time an epidermis that is tangible, alive, sparse but made of flesh, in which the baroque aesthetics of western still life is stripped of its frills in order to meet the essentiality typical of East Asian painting, culminating in a formal syncretism that fully reflects the background of the Japanese artist.

Regarding the origins of hana, the Japanese term for “flower”, the philosopher Giangiorgio Pasqualotto notes how the character of “flower” 花 condenses in itself the meaning not of a thing but of a process. Looking at it, it is possible to see that hana is the result of the stylization of two men surmounted by a leaf of grass, one standing (youth) and one sitting (old age): as if the concept of flower also contained within itself that of transience as well.[1]

Perhaps rather than photography or tracing paper, it would be more appropriate to identify time as the main medium of Masuyama’s work. Although in this new series the artist has in fact abandoned the vast landscapes of his well-known light boxes to focus on more gaunt and essential subjects, we see how his research is only apparently oriented to the representation of a detail. The flower, as a microcosm, makes itself synecdoche of the transience of all living matter through which time, layer by layer, unfolds its paper skin. 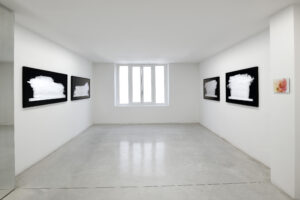 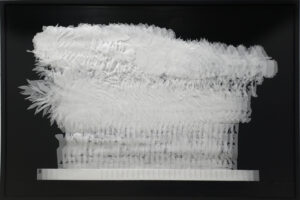