Anne de Carbuccia. The art of ..

Prada Foundation: the importance of being K.

Prada Foundation: the importance of being K.

We can imagine that Franz Kafka didn’t implied a happy ending for his unfinished novel, America, because he was always animated by a negative and radical perspective. We know that Kafka shared the neoromantic critique of the capitalist civilization of the Zionist Bar- Kochba circle: the reader is yet consigned to the hostile atmospheres of a mechanized work where the employees define themselves for their shapeless uniformity while the distressing mood marks a purely functional time.

Although the last chapter on the Oklahoma Theater seems to comprehend an happy ending, it must be taken into account that Kafka’s intentions for the novel America had to be different: in a note of his Diary (1915), he writes that “Rossmann and K., the innocent and the guilty,” were eventually “both killed, by punishment, without distinction, the innocent with a lighter hand, rather pushed aside than killed” (Kafka, 1983). Alfred Wirkner, moreover, interpreted the name given to Karl Rossmann at the time of his inscription at the Theatre – in his view a deadly machine to exploit the naivety of the emigrants – which was “Negro”, as corresponding to the image in Holitscher’s book where we can see a man about to be lynched, and whose subtitle includes the term Oklahoma.

K. is also the title of the exhibition dedicated to Kafka that can be visited at the Prada Foundation until October 25, 2020. Here it has been proposed three interpretations – different media – of America, The Castle and The Trial, whose protagonists are united not only by the presence of the letter K. in their names. (Karl Rossmann, Joseph K. and K.) but also by the revolt against the official justice system. If Orson Welles is in charge of re-doing The Trial and the French music band Tangerine Dream of The Castle, it is the German artist Martin Kippenberger who is testing America through an installation with a paradoxical title: The Happy Ending of Franz Kafka’s Amerika.

Kippenberger was an artist of desecrating and gloomy irony, so in this case he proposes a colorful carousel of bureaucratic apparatus that eventually ends up in the common catastrophes to which the workers of Kafka’s novels are subjected. But it is an anarchic qualification that brings Kippenberger’s installation closer to America. We know about the German artist’s scandalistic vocation, but what about Kafka’s anarchism? A criticism of hierarchical authority and a criticism of the cruelty of bureaucracy seem evident. And yet this also corresponds to an attitude of the characters which, on closer inspection, has been defined as “slightly aggressive, aggressive without calculation […] He (the character) behaves like a shameless libertine in the middle of the inn (the officials’ inn” (Bataille, 2007).

Within the installation, an overabundance of objects seems to recreate the atmosphere of the collective interviews described by Kafka in the novel. Everybody’s welcome, it says in the novel. In fact, the viewer could imagine in the situation of a collective interviews himself: the empty chairs, a mixture of future promise or deadly deception, seem to call the viewer. Yet, in spite of all possible interpretations, we cannot help but think that Karl Rossmann is already dead. 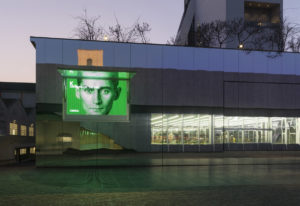 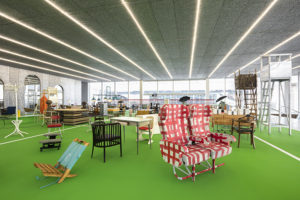 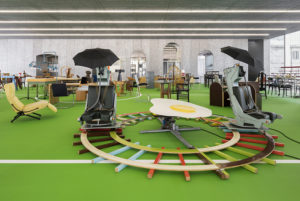