In conversation with Ruggero M..

Maryam Moghadam. The truth of ..

Giacomo Pigliapoco and Luca Gennati, in collaboration with Cassata Drone Expanded Archive, presented Preferire l’ombra, with works by James Bridle, Valentina Furian, Paolo Cirio, Il Pavone, Julius Neubronner, Marco Strappato. The locations occupied for this exhibition were the Loggiato di San Bartolomeo of the Sant’Elia Foundation and the attic of via Malta 21, now the main headquarters of Cassata Drone. The title refers to a constant balance between visibility and invisibility in the relationship between overseer and supervised: the subject of investigation is surveillance in its civil, military, visual and primitive aspects. A research therefore that starts with modern drones with the intention of declaring the need for a personal obscuration strategy. Not only does the overseer remain invisible preferring the shadow, but even the patrolled should propose to consciously remove himself from the spotlight. As pointed out by the two curators – Giacomo Pigliapoco and Luca Gennati – “in the age of mass surveillance, the connection between what is obscure and decentralized is seen as a common act of resistance. The totality of the centralized elements tend to control and dampen the subversive potential of the dark and, referring to Simmel, secret societies.

This must be underlined because we should all prefer – preferring to mention necessarily the one recognized by American literature – the shadow, first understanding it and then choosing it. The increasingly obvious overlap of the idea of ​​being human with the reality of technologically advanced beings leads to the search for possibilities of evasion of media control. The constant endoscopic look of the control society, composed of virtual eyes grafted onto the nodes of the internet network, pushes the individual inner selves to find elements of escape and isolation towards a desire for full autonomy and freedom… We must know how to choose how and when to opt for shadows: in this way we can make ourselves visible or invisible according to our needs. Finding an area of ​​uncontrolled movement requires a set of skills that allow an individual to achieve full control and power over himself. The hacker community is certainly able to interpret the mechanisms of the network: thanks to their ability to read and modify the language of computer programming, they can guarantee a direct and fair relationship between citizens and information systems”.

The artist and writer James Bridle created the public work Drone Shadow in the Piazza Cassa di Risparmio. On the Via Malta site, instead, the archive photos of the German chemist Julius Neubronner, the inventor of aerial photography with pigeons, and the audiovisual installation Fruit of the rowan by Valentina Furian have been proposed. Finally, in the Loggiato di San Bartolomeo, three works: Flying over the white threshold by Marco Strappato and Sociality by Paolo Cirio and a new production by the collective Il Pavone. It should be noted that the work of Paolo Cirio is composed of more than 20.000 patents, hacked by the artist himself, on the prediction of social behavior, highlighting the ubiquitous technological control to which we are constantly subjected.

Ultimately, with these few words, we want to emphasize that this exhibition had not only the intent of a visual value, but wanted to be hypnotic at the level of content, thus descending into the field of social and political. Social and political, two big words, to be understood in the highest sense of the term, thus touching on the themes that involve any contemporary community: a group of citizens who are often forced to live contemporaneity without being able to make opposition. 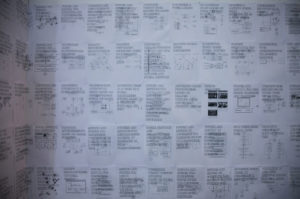 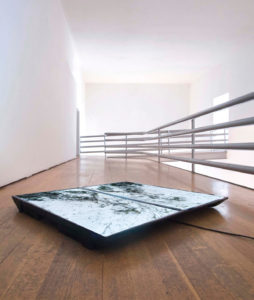 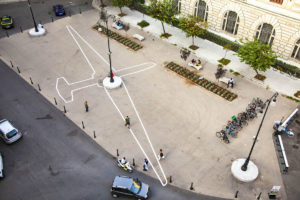 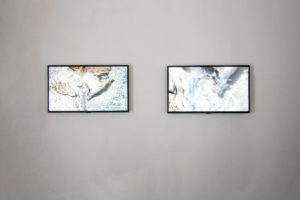