Ren Hang. If life is a bottomless abyss, when I ju...

Ren Hang. If life is a bottomless abyss, when I jump, the endless fall will only be a way of flying

The guttural sounds of the Chinese language form the background of the face with Ren Hang’s marked features. A few words, interspersed with slow pauses, summarize with monotonous timbre the evocative topoi of his photographic poetics. Watching Ren Hang in the multiple videos on Youtube is interesting, as much as it is explanatory, not being able to see him alive because of his suicide, which occurred at the age of 29 in 2017. The images slowly flow, in the presentation of a past exhibition held in Tokyo, and observing them carefully, one perceives his extraneousness from the present world, his sensitive fragility.

“If life is a bottomless abyss, when I jump, the endless fall will only be a way of flying,” he wrote, evoking a malaise much deeper than the simple aesthetic melancholy undeniable in his photos, which will in fact materialize into tragic death. Far away from contemporary creatives for look and expression, through his compact Minolta, he immortalized the bodies of women and men, ephebes and monochromes, sometimes accompanied by wild animals. A simple and minimalist aesthetic led to see what some have labeled as pornography, but in the end the evil is in the eye of the beholder, in this regard many other artists absolutely agree with the concept. Pornography as an artistic theme has been cleared through art for years and although it appears original, by age and expressive typology, a parallelism with “The origin of the world” by Courbet and Hang’s photographs, is certainly meaningful.

To move on to more current references, the name of Hang has been repeatedly associated with that of Ryan McGinley and Robert Mapplethorpe, albeit in an erroneous and maximalist way, in a gross attempt to bring the aesthetic language of the nude back to concepts already expressed by other photographers. However, aesthetic references are not always effective only because the content is the same and in this case they even become misleading. With McGinley there are inherent parallels in the harmony of young bodies photographed and the dreamlike landscapes in which they are placed, but ultimately, the end result is completely different. McGinley’s characters in “The kids are all right” are damned and dynamic, included in pure and apocalyptic natural environments, of the modern inhabitants of a blue orgiastic and liquid lagoon.

On the contrary, Hang’s images are absolutely static, built and cut, technically unexceptionable. Spots of primary colors are counterbalanced by muscular anatomical parts of male bodies, as if to demonstrate the ingenuity and freshness of a body, like a bouquet of yellow daisies. The chromatic breaks in which the reds of the enamels of the young models predominate, as well as the fiery red of their turgid lips, become fauve in the cycle of photographs dedicated to animals. Also in this case the naturalness of the bodies is linked to the plasticity of the animals themselves and the naive poses of the subjects, they soften the intense contrast with the colors and shapes of the photographed birds and snakes. The reference to Mapplethorpe is acceptable only if it leads back to the essentiality of the lines, as well as to the sporadic ability of this photographer to render neutral and stylistically unexceptionable situations that in most of his images acquire a strong and explicit connotation.

Hang is considered to all intents and purposes an exponent of cynical realism, since he was punished several times by the Chinese regime that had banned and censored his works. This does not mean that the aestheticism with which he dealt with his work often led him to point out that his was not a complaint to the regime, but rather a simple representation of the human body, in which there was absolutely nothing perverse or to hide. In contemporary Chinese art often the naked body has been exhibited in various ways just as an art form, aesthetically disruptive, but at the same time as an inevitable provocation, political or otherwise, depending on the orientation of the various artists. As well as Zhu Ming and his performances in which he performed naked in a bubble of transparent plastic in the shape of a snail shell or Chen Guang and his extreme videos, Ren Hang used the body, with the ingenuity typical of artists, careless of the consequences. Evidently these photos are the expression of his feeling and wisely the Maison Européenne de la photographie of Paris has seen fit to pay homage to this photographer with a complete and exhaustive exhibition of his work, “Love”, exposing intense images of great visual impact. 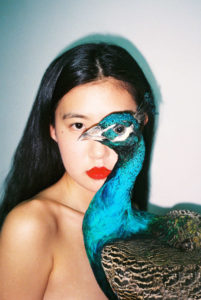