The MAST Foundation presents Displaced, the first anthological exhibition of the Irish photographer Richard Mosse, whose work is located at the intersection between documentary photography and contemporary art with the aim of revealing the hidden edges of the social, economic and political changes of the globalized era in the area of ​​ethical reflection focused on the most current issues of our present, such as migration, conflict and climate change. The artist – explains the curator Urs Stahel – highlights with his images what precedes and what follows the culminating and traumatic moment in which violence manifests itself, expressing a precise critical position towards the communicative conventions of the media, which instead tend to privileging sensational moments in pyrotechnic competition on the level of emotional effectiveness. The choice to tell the events through the detection of their traces, often hidden or neglected by the official history, is evident from his first projects, such as the Nada que Declarar series (2007-2008), which alludes to the illegal crossing of the border between Mexico and the United States through photographic evidence of objects lost or abandoned by fleeing migrants. The Breach series (2009) also responds to the same narrative criterion, which follows the Anglo-American invasion of Iraq during the second Gulf War by portraying the incursions / occupations of the buildings of Saddam Hussein’s family by military troops, caught in attitudes of rest in unsettling harmony with the elegant architecture (sometimes full of rubble) and with the seraphic calm of the surrounding landscape. If in these works the artist’s language still appears in the definition phase, his authorship explodes in a more mature and refined way in subsequent projects, in which Mosse unhinges the representative criteria of photographic reportage using the most up-to-date technologies, often of military derivation, which make it possible to translate into images (sometimes with surprising aesthetic results) information usually extraneous to human visual perceptions.

In the Infra series (2010-2014) Mosse continues his exploration of the possibilities of aftermath photography to tell the internal wars in Congo (which between 1998 and 2008 caused more than five million deaths) and investigate their causes without falling into the traps of classic photojournalism, where the aestheticization of drama and the pornography of pain prevail over the investigation of phenomena. Here the artist decides to allude to the cruelty of the events in progress using with an expressive and evocative approach the military reconnaissance film sensitive to infrared rays Kodak Aerochrome, patented during the Second World War to identify the presence of military vehicles camouflaged in the landscape. The shots taken with this technique record the presence of chlorophyll in the vegetation, transforming the lush African natural landscape into a surreal vision in shades of pink and red, whose intensity varies according to the concentration of chlorophyll. If from a symbolic point of view the red is instinctively linked to the blood poured into the earth, the brilliant and “toxic” connotation of what at first glance seems to be a chromatic alteration obtained in post production works as an alarm signal that invites the viewer to go beyond what is immediately visible to discover the flaws in the institutional media narrative. In this sense, for the artist, the technological medium, responsible for the aesthetics of the images, also determines the grammar that informs the narration, confirming the famous phrase by Marshall McLuhan “the medium is the message”, title of the first chapter of Understanding Media: The Extensions of Man (1964), with which the Canadian communication theorist summarized the coincidence of the means of communication with the message to be transmitted. The images that pertain to this series, composed of immersive environmental panoramas of very large format, portraits of armed guerrillas and photographic samples of the transportable housing units with which the Congolese communities prepare themselves for a permanent escape from the attacks of rebel groups, express in an iconic way the condition of life and death of a country that is victim of the palatability of its mineral and natural resources, in close connection with the economic and power factors that constitute its background.

Richard Mosse’s reflection on the levels of invisibility of reality, through the decontextualized use of military photographic tools aimed at detecting what escapes the human eye as an expedient to change the perspective of the gaze and create awareness and attention on the dramatic events that happen in the other half of the world that Western culture tends to ignore, continues in the Heat Maps series (2014-2018) dedicated to the theme of migratory flows in the Mediterranean. For this project, the artist goes to the vast refugee camps set up in Greece, Turkey and Lebanon to document their multifaceted reality using a thermal detection photographic rifle, a device (considered a full-fledged weapon by international law) designed to record the differences in heat in the infrared range and locate human figures up to a distance of thirty kilometers even in the absence of light. Here, too, Mosse’s operational, conceptual and procedural approach starts from a meditation on the technological means to develop a powerful aesthetic, functional to the amplification of situations that are already emblematic in themselves but politically condemned to invisibility. The works belonging to this series are spectacular black and white panoramas that derive from the assembly of hundreds of shots, taken with the thermal camera attached to a drone, which manage to combine an amazing sharpness of details and a disturbing indeterminacy in the rendering of humans, which appear as fleeting thermal traces without identification. A paradigmatic example of this project is Skaramaghas (2016), a monumental view of the port area of ​​Athens in which we see how identical containers are used for the storage of goods and as a temporary home for migrants waiting to know if they will obtain the permits to continue their trip or whether they will be re-embarked to their countries of origin. The work, already exhibited at MAST in 2018 in the exhibition Pendulum. Goods and people in movement dedicated to the circulation of raw materials and consumer goods in global society, was acquired in the collection of the Foundation, confirming its commitment to supporting promising young talents in the field of industrial photography meant in a broader sense. This technique allows the artist to scan and condense in a single image a plurality of details, implications and narrations otherwise impossible, while the inconsistencies deriving from the assembly in post production (such as the presence of shadows without their origin, the repetition of the same presence in several points of the view or the different focus of certain details compared to others contiguous to them) suggests interesting considerations on the trait of infidelity inherent in the photographic image, even in its apparently more objective declinations. The same technology used for the Heat Maps photographic series returns in the audiovisual installation Incoming (2017) – created in collaboration with the director of photography Trevor Tweeten and with the composer and sound designer Ben Frost – which shows the take-off of military jets engaged in operations of control of the Mediterranean and the events of migrants on boats and in refugee camps as a hallucinated contemporary epic in which nothing is filtered except by the particular mediation of the filming devices.

In recent years, Mosse has begun to investigate the South American rainforest, where for the first time he has shifted the interest of his research from the denunciation of human conflicts to the ecological issue. In the Ultra series (2019), with the UV fluorescence technique, the artist plumbs the undergrowth describing in detail the biodiversity of its ecosystem, while in the Tristes Tropique series (2020) through a multispectral film used in the scientific field to detect the presence of minerals, pollution and other environmental data, performs a bird’s eye mapping of the suffering state of the Amazon forest, highlighting with different colors, once again dictated by the technological means, the areas most compromised due to human productive activities, often carried out in a regime of illegality. 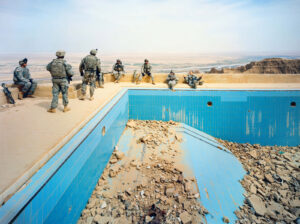 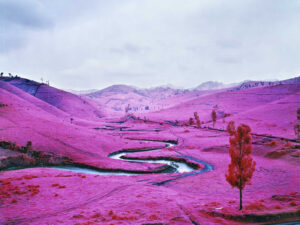 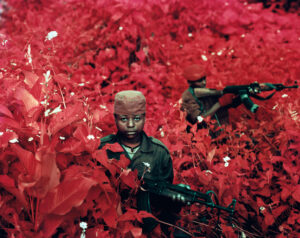 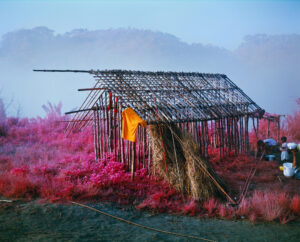 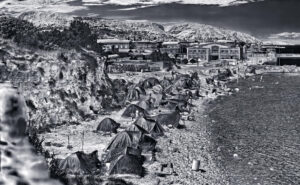 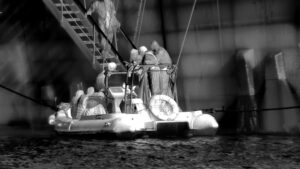