Grazia Varisco on view at the ..

The Mexican artist Rodrigo Hernández (Mexico City, 1983) presents at the P420 gallery in Bologna a series of new works inspired by the nocturnal atmosphere of the city, where he stayed before the exhibition, letting himself be fascinated by the red arcades, the shades of blue of the sky that immediately follow the sunset and the suggestive architectural evidence of the medieval past. The first explicit reference to Bologna we encounter is precisely the title Anche di notte, which the exhibition shares with the work that begins the exhibition itinerary, and which derives from an inscription he noticed on the door of a garage, in which these words reinforced the prohibition expressed by a sign of a driveway.

Anche di notte presupposes a motionless and infinite time, in which the artist, contrary to the prohibition expressed by urban signs, invites us to stop calmly. The setting up of the first room of the gallery could be interpreted as a luminous antechamber of the dream, in which the visitor is free to let the background noise of his/her recent perceptions settle in order to become a cavern himself/herself, before crossing the threshold of the night. The painting that entitles the exhibition is a small metaphysical composition where an elegant Brancusian head placed on the ground reflects the light (psychic, but really brightening) of the full moon that dominates it. If we mentally expand the space-time evoked by this painting, we are ready to make the transition, which takes place through the site-specific portal created by the artist for the project, on which we see the coat of arms of the bat, a recurring totem animal in his figurative vocabulary. The bat is full of symbolism for its nocturnal quality, which some cultures associate with the darkness of evil, while by others it is considered an omen of luck or an intermediary with the divine. In this imaginative and symbolic attitude, Rodrigo Hernández proves to be particularly similar to medieval sensibility, which finds an emblematic expression in the so-called Bestiaries, catalogs of magical creatures, often terrifying, in which Christian allegories hybridized with the beliefs inherited from paganism, as in the artist’s works the suggestions of art history blend in a new and mysterious mythology.

We then enter the second room, where the gaze is dazzled by the golden glitter of the works on display, precious plates in hand-hammered brass, a very common traditional technique in Lisbon (the city where Hernández lived for several years) for the processing of jugs and crockery. Another characteristic of the artist’s approach is in fact that of using artisanal production processes and poor materials, such as papier-mâché (of which piñatas are made, protagonists of Mexican village festivals) or terracotta, which are elevated to art in the harmonious integration with cultured artistic citations. As in an archaic hypogean pantheon, the gilded bas-reliefs surround the visitor, who finds himself/herself surrounded by a host of imperfect and essential beings with softly engraved outlines in the pattered metal, whose surface seems to liquefy in an unearthly light flow. We are in the heart of a magical cave that makes the perception immanent and tangible of how, in Hernández’s sensibility, parallel to the visible reality there is a world populated by rarefied creatures, which are configured as melancholy but imperturbable emanations of our inner landscape. These stylized figures, silhouetted on the white wall or against the majestic ultramarine blue backdrop (which recalls the walls of the Casa Azul in Coyoacán where Frida Kahlo lived, but also the skies of late Western Gothic painting) placed on the opposite side of the entrance, float weightlessly, embodying being in its most generic essence, which is specified in each table in a sketch of an emotional situation. The gravitational fulcrum of their flotation are distant planets that echo the moon of the first painting, whose influence seems to breathe life into their archetypal bodies, which are always incomplete but sometimes tenderly human when some details are identified by a more detailed and epidermally sensitive chiselling.

In Night Embrace we see two characters united by an embrace ascending into an indefinite space, attracted by the cone of moonlight that dominates them: the couple, sexually neutral, is clearly mindful of the two lovers painted by Marc Chagall in Au-dessus de la ville (1914-1918), but instead of twirling in a dream that distances it from reality as it happens in the famous painting, it seems to decline the icy splendor of the star in an intimate and earthly dimension. In Fiume a lonely man meditates observing the trajectory of some fish swimming in the brass, which are as energetic as Keith Haring’s dolphins (with which they share the formal simplification), but their darting vitality is expressed by a linear trajectory, like the trace of the passage of a shooting star. In Senza gravità the fluctuation of the metaphysical man almost leads him to overcome the moon, on which he bends as if he wanted to attach it to his body by wrapping it with a somersault, poetically nullifying the sidereal distance that separates them, while the Magrittian flight of the characters of the two plates, also entitled Anche di notte, which occupy the blue wall, project them into a mobile constellation of planets and meteors of indefinable size. In these works, the sobriety of the sign softens the richness of the golden surface, which takes on an immaterial consistency, while in the two works inspired by the fourteenth-century tombstone of Filippo dei Desideri, admired by the artist at the Medieval Civic Museum of Bologna, the hammering becomes more insistent, as if to suggest the roughness of the stone of their model. In the first the original attributes of the protagonist, the dragon and the sword, are replaced by a chain clock and a book, which transform the warrior into a knight of science and painting, while in the second he appears framed by an almond, an ogival symbol associated with Christ or the Madonna in Majesty, very common in manuscripts and sculptures from the Middle Ages. These two slabs are paradigmatic of Hernández’s ability to introject different stylistic suggestions to return them praised in a very particular and absolutely contemporary expressive figure, without flattening their cultural and evocative complexity. 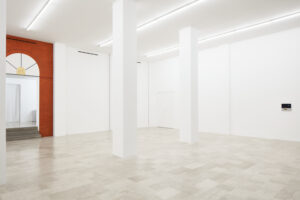 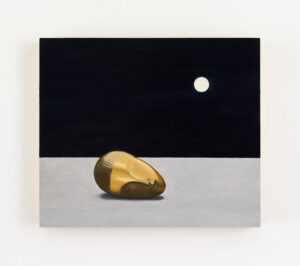 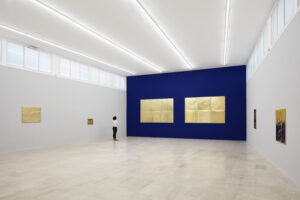 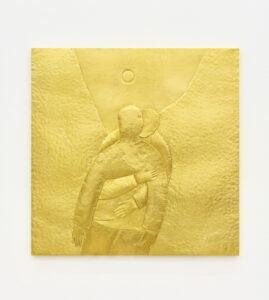 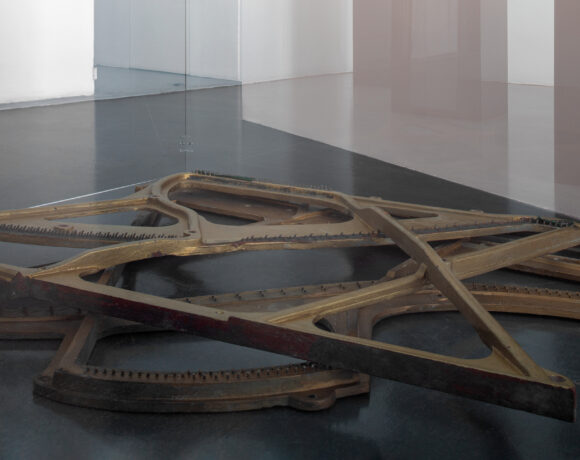