Ajax: “Maybe we should  break some heads down the road.”
Cleon: “You are only a soldier and keep your mouth shut.”
Warriors of the Night (The Warriors, 1979)

Warriors of the Night, a film inspired by Sol Yurick’s novel, published in the 1960s, filmmaker Walter Hill recounted the battle for the survival of the Warriors, one of the youth gangs that competed for control of New York’s neighborhoods. The action takes place from sunset to sunrise and focuses on the return of the protagonists from a large gathering in the Bronx park, for decades has been synonymous with a dangerous neighborhood, now transformed into a residential area. The undisputed epicenter of this adrenaline-filled street adventure is the subway, the elective hunting ground for urban tribes of warriors in leather jackets, who armed with baseball bats, carry out a spectacular saga of bloodless violence.

Atmospheres similar to those evoked by this adrenaline-filled night trip in a far-west New York are also found in Sabrina Meissner‘s painting, which detects imbalances, inequalities, and tensions of contemporary existence to re-read them in a gender-based way. While in Walter Hill’s historic cult film, the heroes were young post-modern Native Americans engaged in a venture comparable to the retreat of the 10,000’s through the Persian Empire (as reported by Xenophon in Anabasi), the protagonists of the German painter’s dystopian fantasies are stylized women whose faces are seen only surmounted by helmets of hair similar to helmets of fighters. Their physiognomic features seem to derive from a primitive tightening of the adolescent’s face portrayed by Edvard Munch in Puberty, with the same unobtrusive, hostile and lost gaze. A thick dark contour line firmly emphasizes the essential elements of the face whose shadows and wrinkles of expression dig into dilated and deep pupils like cesspools. Rough brushstrokes of acrylic paint boast the figures as if they were sculptures carved in wood, a technique widely practiced by local artists from the area where Sabrina Meissner comes from, while the subdivisions of the pictorial surface in geometric cages gives the figures an iconicity of Gothic glass.

Behind the women lies an alienating setting characterized by contrasting acid colors and dotted with geometric hints of architecture, a no man’s land with a hybrid identity, uncertain between the non-place and digital graphics. These panoramas are inspired by office buildings, railway stations, airports, structures in which the artist has spent a lot of time during her professional life, reworked here with a visionary style worthy of a hallucinatory nightmare with psychedelic colors that we might imagine accompanied by an electro-dance soundtrack. In her scenographic backdrops, Sabrina Meissner seems to dig into the anxieties of the underground subcultures of the 70s, bringing to life the energetic vibrations of artists such as Keith Haring and Jean-Michel Basquiat. But if the rebel graffiti of the latter manifested a joyful dissipation of the self in the midst of the metropolis, the German painter’s lysergic structures synthesize the city as a network of energy flows that ignite desire, but also as a scaffolding of rules and boundaries that make its full enjoyment impractical.

Her powerful and mysterious female figures, whom she defines as a serial form of indirect self-portrait, embody both strength and vulnerability: they are not on the run like the Warriors in the film, but they are also trying to dodge the ambushes of invisible enemies, which is not clear if they come from outside or if they are their internal demons. The tension between the abstraction of the backgrounds and the simplified figurative appearance of these heroines, amplified by the use of contrasting colors, is the key through which Sabrina Meissner developed her story of the present. The square or rectangular shapes that fragment the surface of the work by placing behind or in front of the figures as grids or bars describe contemporary society as a perverse videogame that, on the one hand, fascinates the individual, while on the other it makes him a recluse, more or less aware of his or her isolation. In a stylized and depersonalized urban context, those who are out of the game reserved for some elites of power end up feeling detached from the world of perceptions, deprived of any possibility of sympathetic communication, and even detached from themselves. The sense of extraneousness of the external world, which appears to be deprived of the character of reality, symbolizes in Sabrina Meissner’s poetry the overwhelming schematization caused by contemporary technocracy.

Her daring creatures out of this world make a harsh criticism of postmodern society, to which they oppose a silent resistance while remaining in some way “connected” through imaginary circuits and flows of information. Their wide-open eyes penetrate the mysterious depths of the unconscious, but they do not prevent the other senses from being constantly vigilant, alerted and listening to the pitfalls of a permanent bluish metropolitan night, stained here and there by improvised splashes of color. The image has the pressing tension of a thriller, but the solemn hieratic in which women warriors face; the unknown seems to assimilate them to real urban idols, who are unassailable and omniscient in their primitive grace. As black brings out the colors it is combined with, the thick contour lines that mark the border between figure and background represent the obstacles that we all face in our daily lives. And the artist’s invitation seems to be to look fearlessly beyond and through the bars to absorb and emanate our inner color, to transcend boundaries without falling apart and to aspire to a superior awareness of existence. 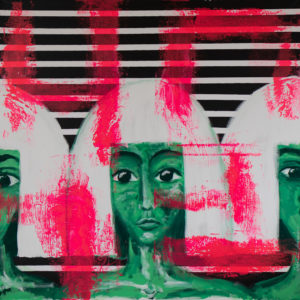 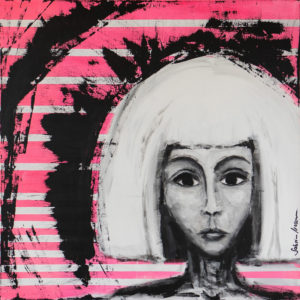 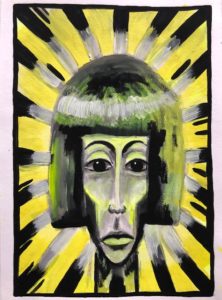