The National Mountain Museum i..

Sahar Alizadeh. The body of the soul

Sahar Alizadeh. The body of the soul

The platonic myth of the cave describes a group of people who have lived chained to the wall of a cave all their lives, facing a blank wall, behind them burns a fire and they only see some shadows of the outside world projected by the fire. Seduced by the images on the wall, they consider the “meaningless emptiness” that move in front of their eyes as truth and confuse appearance with reality, the faded representation with the luminous and stable identity. If in Greek philosophy the truth (Aletheia) is the unveiling of what is obscured by the deceptive appearance, the Platonic shadow (Skia) has the ambiguous consistency of reflections, evanescent appearances that inhabit the nocturnal regime in which the illusory life of dream images takes place. The shadow is a minor entity, defined by negation with respect to the object that projects it: incorporeal, without quality or color, it is lack of light and good, bearer of that non-being in which chained slaves prefer to atrophy their aspirations, rather than facing the risks of blinding light and the dangers of freedom.

But aren’t the shadows to give us the perception of depth, to make the sensitive world endowed with depth and meaning? Pliny the Elder in the Naturalis Historia tells that painting originated from the use of contouring the human shadow with a line, perhaps in the attempt of a girl to immortalize the likeness of the departed beloved. Painting is the daughter of the shadow, which duplicates the real without the burden of details, and as the shadow is an emanation of the human figure, its alter ego: a synthesized re-presentation, immaterial, close to the condition of the ghost, in contrast with what has body and life under the sun. When the light blinds with its glow, it prevents us from seeing and the meridian demons are magnified: the real things become spectral and the elongated and deformed shadows become the epiphany of the mystery. The shadow is disquieting, in it one hides and weaves, dangers rise suddenly from there. It is the canonical place of the uncanny, of the death that comes back to life; as for any entity connected to the ambiguous nature of the image and the reflection, the double could at any time replace the original. Hitting the shadow or treading on it means damaging the man to whom it belongs, losing it is an imminent threat, premonition of death.

These suggestions are interpreted by the painting of the young Iranian artist Sahar Alizadeh (Tehran, 1995) which depicts the alienation of contemporary society as a visionary and fragmented theater of shadows. “Nothing is as it seems – explains the artist – our lives are full of dislocation and empty even if they seem stuffed with things. In my paintings I try to express this existential condition through shadows and unidentified human figures”. Her most recurrent subjects are unadorned grayscale urban scenarios crossed by phantasmatic presences in which it is almost impossible to distinguish the shadow from the entity that generates it. They could be dreams or memories, projections of fears and moods, in turn fragmented with a cinematographic cut that alludes to an impossible consequentiality. Sometimes the shadow refers to the deformed shape of what we can assume its origin, but often the double becomes an autonomous image that makes fun of the subject splitting it or completely distorting it. Animals, men and objects touch on the uncertain ground of a mental penumbra that presupposes, outside the visual field of the picture, a ruthless omniscient light that nails these visions to the pictorial plane. Some figures also appear as the white negative of a black shadow, within which other simulacra coexists and generates seemingly unrelated stories and visions. Thus the inviolable dark-light oppositional couple in which, starting with Plato, so much of Western philosophy has found its inspirations, has become indeterminate.

By distorting the consolidated axioms of perception, Sahar Alizadeh creates a new founding place in which the backstage of life, the passions and the unconscious voices take on a leading role, becoming themselves the form of things and not only their internal and inscrutable engine. The hybrid nature of the shadow, an urgent and inescapable presence, but inconsistent and elusive, thus becomes a powerful tool to arrive at an oblique knowledge, which instead of revealing things by tearing the hypothetical veil of illusion, leaves them in their shadow, keeping intact the secrets and implications they hold. What in itself is stingy with signs, the shapeless manifold with its blurred and flowing contours, expresses itself in an ambiguous way and avoids the cruel dissection of analysis: precisely for this reason the shadow, captured by painting, manages to postpone in a direct way to what it is widespread, non-localizable or definable, preserving its evocative and semantic richness.

If life can be compared to a sort of alternating vigil in which when the man goes to sleep his shadow, which already knows the darkness of which the afterlife is made, remains to watch without the two different states of consciousness meet if not sporadically, Sahar Alizadeh magnifies and confronts the background noise of existence as a radical gesture of truth beyond appearances, giving a pictorial and tangible body to the most defenseless folds of the soul. Her paintings scream loneliness and disorientation, they bring out the emotional repressedness of a society, like the contemporary one, which mortifies individual yearnings in the name of an impersonal efficiency, but they are at the same time a powerful hymn to freedom of thought and expression. To show the immanent mystery of things, only artificially referable to conventional categorizations, is for her to go back to the original meaning of painting, to its almost magical power to materialize untold absences and compresences and to its ability to deceive the senses to reveal to consciousness. 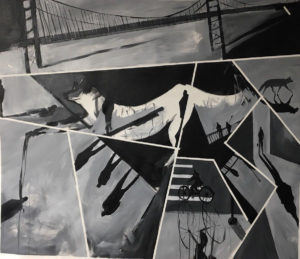 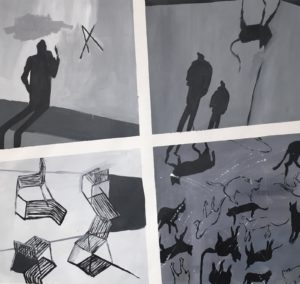 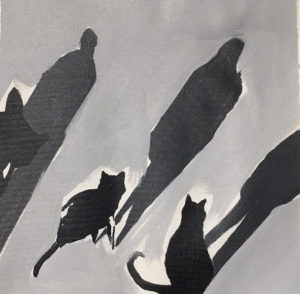