Those who know Sonia Andresano’s practice cannot omit the importance of the experiential act that the artist visibly “imprints” in each of her works. Sonia Andresano is proudly a sculptor and with a sculptural approach she relates to every medium: every organic, inorganic or technological tool used, becomes a functional expression of the signifiers in her works. 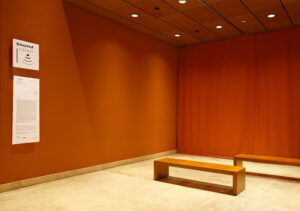 In ALLA CONSOLLE, an audio piece, curated by Claudio Libero Pisani and presented the last 7th November on the occasion of Sound Corner, a project by Anna Cestelli Guidi held at the Auditorium in Rome, the succession of spontaneous sounds generated by a worn tap, by modulating the knobs, is directed by the artist as in an orchestra. What we think is the result of an artificial and digital procedural work, is nothing more than the – voluntary – act of Andresano to modulate what is already present in the reality. In the interpretative action there is also what the imagination leads to imagine, which communicates in itself poetical elements that go beyond the translation itself into image. The work activates in the viewer listening an imaginative process that is always different, where the shrill sound of the tap pressure seems to be an excruciating lament, the grave of the vibration of the air sounds like wind instruments, due to the reiterating noises of pneumatic hammers, and then it shows itself for its domestic nature. 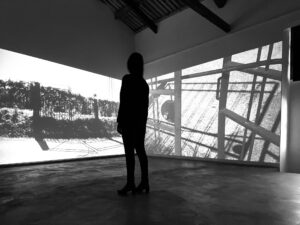 When we think, therefore, of the sculptural act we tend to focus the attention on the final extrapolation of the form through matter, as well as – trivially ­– on the final result. The key to critical interpretation, however, does not lie only in considering the gestural act of sculpting as a generator of forms or as a plastic container of meanings, but to foresee and include the spatial logics that the artist is obliged to consider beyond the medium adopted. For Andresano the sound becomes sculptural matter whose tone pattern, modulated, generates an imaginary form. In the field of feeling, the feeling of listening to ALLA CONSOLLE is able to objectify itself, paraphrasing Andrea Pinotti, detaching from his sentient subject and launching itself beyond the individual himself[1]. The act of going beyond the self, then, for Andresano becomes a will to power, understood as a punctual expression of movement, intimate essence of the being and her practce. “When a work comes out of the studio it becomes everyone’s”[2] asserts Andresano, and only through the empathic act does the exchange between the artist and his user take place. 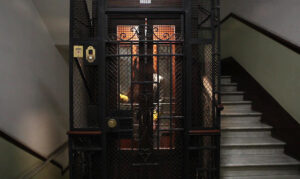 Andresano’s ability to know how to turn around matter, which then arises in the implementation of additive or subtractive processes of the latter, it has been decisive not only in forming his poetics, but also defining a practice. In shaping matter, going back to its origins and to paraphrasing Aristotle, its essence is legitimized by bringing something into presence. What the function of aesthetics has accustomed the contemporary viewer to think is to consider the poetic act proper to art – as well as the essence of pro-duction in presence – an ultimate purpose. However, the work of art is not the result of making, but something substantially different. In Greek praxis or in the artistic work, it is contained in its very root the act of “going through” of a passage that goes up, or beyond, to the limit. Similarly, in a sequence of the video BARCODE, 2020, which Andresano exhibited a few years ago at AlbumArte, in Rome, the sound tension generated by the wobble of the gate that the performer, in balance, tries to overcome amplifies the pathetic act of overcoming it. Sound is an expression of themes, dear to Andresano, related to restlessness, travel and limit, which always accompany her works visually, or in the making. 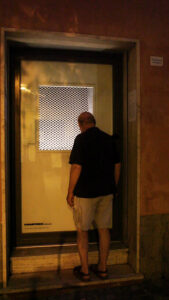 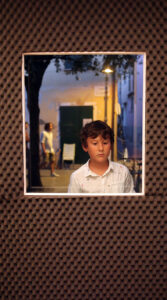 The personal aspects of the artist then convey universal signifiers, but never linked to a predetermined or marked narrative strand, evoking in the eyes of the observer an andante potential dynamism. Andresano, almost invested by a Nietzschean thought, considers the continuous becoming as an authentic form of reality and expression of restlessness, rejecting a temporal linearity. The sound of ALLA CONSOLLE almost follows the logic of the eternal return, where the deepest andante tones become acute, transforming an apparent chaotic symphony into a golden and harmonious imaginary circle. The nature, which is wavy due to the sound presented as a diffusive movement of an invisible matter, in Andresano’s work conceptually crosses the boundary of its container: the passer-by engaged in crossing the corridor hears echoing in the distance off-keys noises, which create a narrative short circuit between container and content. The foyer of Sala Petrassi, a place of silent gathering and resting, setting for intimate and affective expectations, becomes for the user a porous container made of diversified imaginative symphonies that gradually spread in the corridors. For Andresano, suggesting multiple and simultaneous points of view of reality is not an act of divine knowledge, but rather a potential bequest of the same accepting its continuous impermanence, which the artist expresses not only through sequences and visual snapshots in movement but also in allegorical melodies. The sound of traveling trains, associated with the ascent and descent of an elevator (Trammammuro, 2018) expresses the will to power of art itself, which, paraphrasing Agamben, detached from the artist and the sensitivity of the viewer, stands “as the fundamental trait of the universal becoming”[3].