Francis Offman. Painting as a ..

“Signs of The Times” is the group show of :mentalKLINIK, Joël Andrianomearisoa, Andreas Angelidakis, Romain Bernini, Thomas Lélu, Lin Zhipeng (No.223) and Luna Paiva currently underway in the evocative spaces of Palazzo Cigola Fenaroli, headquarters of APALAZZOGALLERY in Brescia. It identifies in Jérôme Sans an ideal orchestra director of what appears to all intents and purposes as a collective able to both reflect and reveal the intrinsic nature of contemporaneity.

Taking its first steps within a frame whose oozing historicity seems to marry rather than contrast with the most evident urgencies and connotations of today’s world, “Signs of The Times” wants to present itself as an exhibition able of highlighting that sense of profound change or, better said, the very beginning of a completely new phase in the flow of history. More specifically, the presented artists and works are linked by the multidisciplinary ability to highlight how today all that immense system of certainties and ways with which interpreting reality has been torn apart by the lethal blows of the current pandemic events.

Therefore, what is staged is not so much the presumption of providing answers or self-styled new recipes with a universal scope, but rather a focus on the awareness of having to deal, on a collective level, with a new universe of signs. Almost a new alphabet that will have to be written, deciphered and put into practice starting from the exploding – in a sort of Marxist key – of those “contradictions” and social, political, environmental (etc.) questions that the recent past has brought up a point of collision. Nothing is the same anymore and consequently the way reality is interpreted will also have to change. The spaces seem to be pervaded by the desire to bring out this awareness, as if to force the viewer to have the courage to face an epochal challenge. There is a constant sense of Schumpeterian “creative destruction” – with yet all-encompassing connotations – and of being ready to define new interpretations of the world. All of that, through a completely heterogeneous range of artistic experiences.

The :mentalKLINIK duo (started by Yasemin Baydar and Birol Demir in Istanbul in 1998) invades one of the rooms with “PUFF OUT M_2101”, an environmental installation including eight robots vacuum cleaners and various glitter, and with “CHROMATIC MADNESS 2101”, wall works in cotton paper, solar film and polyester. Right from the start, they manage to convey a sense of profound mingling between that feeling of celebration, an idea of ​​inexorable romantic decay and a continuous mutation, expressed by the robots’ activity of sucking in and throwing back the glitter on the floor in a constant change of the work. More generally, it is emanated an idea of ​​suspension and stasis characterizing the restless transition interval between the inexorable end of something and the beginning – it is not known whether it has positive and negative connotations – of something else. A “bad trip”, as stated in the press release, that leaves you in a state of estrangement and helplessness then amplified on a physical level by how the light is furiously reflected throughout the environment.

Something that is taken up again, albeit through a different register, by the canvases and interventions in the following room dedicated to Romain Bernini. His is a search for the indeterminate, an aimless exploration both in the meanders of human intimacy and in the indecipherable relationship with the natural world and that is proposed through an aesthetic with dreamlike, primordial and spiritual connotations. At the same time, it also emerges the intention to overcome the related clichés and offer new interpretative keys. Highly illustrative in that sense is “Discovery”, an imposing oil on canvas representing four individuals in a circle around a continuous flow of exhalations. It is a mystery that cannot be revealed and in front of which one is invited to a helpless contemplation.

Instead, a few steps are enough to literally be incorporated and transported into another dimension with the environmental installation “Athens by Night” by Andreas Angelidakis. He is an architect by training who, according to his own words, does not aim so much at “building” as instead “showing”. He wants to recreate a scenario able of making the Athens’ ancient ruins coexist with those “ruins” exemplifying the dramatic legacies of the much more recent economic and social crises. We are witnessing a real epochal overlap with videos and 3D animations proposing an investigation of Greek archaeological sites in the current and ethereal digital contemporaneity together with foam movable pillow modules which invite to active the observer’s participation. All of this, in an emotional and physical involvement and according to a perspective of hope in the construction of new models of collective life.

Similarly, impressive architectures, as well as the concept of activation of the work by the visitor, can be also found in works as “Le terrain de tous les possibles” and the series “The Labyrinth of passions” by Joël Andrianomearisoa. The installations are the result of the assembly of clothes, fabrics and papers that paradoxically appear as totalizing structures but at the same time intrinsically fragile given the nature of the constituent materials and continuously affected by the beholder’s movement and breath. Therefore, we are invited to let ourselves be overwhelmed triggering a process of involvement that must not have any restraint and to which, visually, the sparkling writing “DISASTROSLY BRILLIANT” by :mentalKLINIK acts as an interlocutor in an all-round emotional triumph. Undoubtedly, the visual stimulus does not stop in front of Thomas Lélu‘s cartoons, conceptual works with which the artist concretizes that fusion between art and life by proposing, through the attitude of the protest, expressions of our age and everyday life in the form of slogans.

That sense of commitment and struggle is therefore cancelled and loaded with new meanings mirroring the current contemporaneity. Alongside these, there are the wonderful digital prints by Lin Zhipeng (also known as No. 223) aimed at giving voice and dignity to the desire for lightness, innocence and hedonistic spirit of the post-80s and 90s Chinese generations in an attempt to escape from the weight of their millenary tradition. At the end of the path, the works of :mentalKLINIK and Thomas Lélu are placed in dialogue with the aesthetics of the daily of Luna Paiva. She uses the gilding or bronze casting processes to give a new aura of sacredness and eternity to those objects – like garden chairs – that simply disappear within the current consumer society in a process of continuous replacement. Instead, they are proposed as the new idols of a time that need to slow down. To stop, discover and admire that sense of intrinsic beauty in the only apparent banality of the ordinary that is lost in the frenetic succession of moments completely emptied of their vital essence.

Perhaps, the beauty of “Signs of The Times” has to be found in this firm intention of not wanting to be the spokesperson for imaginative self-styled and one-way solutions but rather to stop shortly before and putting the spotlight on a new one, among the many possible, way to go. An attempt to move individual consciences through the creative act. An attempt that despite its daring architecture, irreverence and sparkling brilliance wants to show all its intrinsic frailties and insecurities about what to do next. A reflection of those essential human complexity’s features so feared and increasingly ostracized by a modernity that still struggles to accept them. And perhaps, faced with this labyrinthine monster that is the future, “Signs of The Times” invites us to reconstruct from here. Altogether, brick by brick.

For all the images: courtesy of Apalazzo Gallery, Brescia 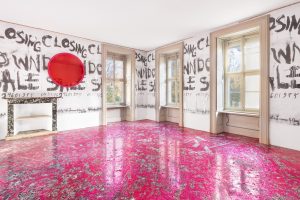 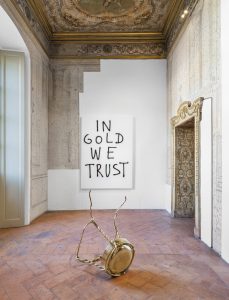 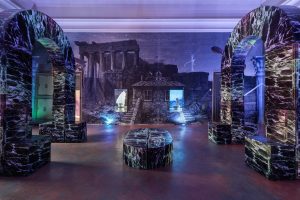 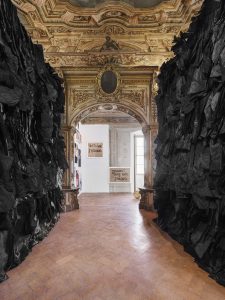 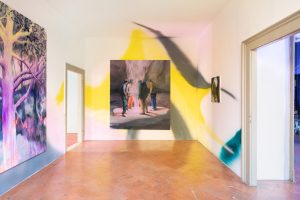