The strength and courage of Af..

Sophie Ko. The remnant of the earth

Sophie Ko. The remnant of the earth

In the era of digital hyper communication it has become commonplace to speak of “immersive staging”, designating with this term the successful scenographic attitude of an exhibition project designed to arouse in the visitor the impression of being the protagonist of an experience, whose spatial time and emotional coordinates are wisely determined by the reciprocal relations of the works summoned to the exhibition. The rise of this characteristic to a primary and absolute value, in evident homology with the media and social logics of the photogenic work, ends up in most cases emptying the meaning of the exhibited work, transforming what should be a medium into a an end in itself that uncritically absorbs the creative energy of the artists and monopolizes the receptivity of the spectators. These reflections come to mind by contrast when visiting Il resto della terra (The remnant of the earth), a solo show by Sophie Ko (Tbilisi, 1981) at the Galleria de’ Foscherari in Bologna, an exhibition whose sober and aesthetically flawless layout undermines this simplified approach to function as an effective device of visual, emotional and intellectual immersion that naturally introduces the visitor into the refined and cultured imagery of the Georgian artist. No special effects, therefore, but an itinerary which is perfectly articulated in epiphanic moments, each of which materializes a different hypothesis of material, ontological and poetic reworking of the concept of image.

Art without distinction of time, space and origin has always constituted the imaginative, conceptual and linguistic horizon of Sophie Ko’s research, which finds its main theoretical foundation in the intuitions of Georges Didi-Huberman, according to which the images from the past they arise in the present and ignite where the contrast between detachment and belonging to the reality of which they were originally an expression becomes more lacerating. It is a sensitive tribute to the French philosopher Quanto dura una candela / How long a candle lasts (2021), a photographic print placed immediately after the entrance to the gallery in which a lit candle appears in a dark environment framed and made visible by the faint glow of the luminous halo of its flame. The work, which precisely (but not ostentatiously) recalls the nocturnal intimacy of the seventeenth-century masters after Caravaggio, such as Georges de La Tour, Gerrit van Honthorst or Trophime Bigot, demonstrates the artist’s ability to intellectually adhere to the objects of her investigation and to subsume them (without betraying their essence) in her artistic discourse. This particular subject, in addition to identifying the incipit of the exhibition itinerary by suggesting to the visitor to look for a different way of re-emerging an image and the imaginary to which it refers in all the exhibited work, alludes to its “burning” according to the thought of Didi-Huberman and prefigures the specific nature of the material that was the first to convey this research in the artist’s creative life, that is the ashes derived from the combustion of images of famous works from art history together with pure pigment powders.

An allegorical and literal transposition of the idea of ​​combustion returns in Lacrime su fuoco / Tears on fire (2021), a series of collages on paper in gilded frames in which we see small portions of printed pictorial images leaking from the ovalizing burns of the layers of white paper that cover them, preventing their unitary vision. From a lexical point of view, here the artist re-elaborates and hybridizes some technical and conceptual cornerstones of the most recent art history, such as Cellotex, the abrasions of plastic materials obtained by blowtorch with which Alberto Burri limits in the 1960s had overstepped the limits of matter and the boundaries between painting and sculpture revealing the osmosis between the space of the work and that of our sensorial perceptions, or like the gold Concetti Spaziali / Spatial Concepts by Lucio Fontana, in which the presence of the noblest metal refers, as in the classical, paleochristian, medieval and renaissance antiquity, to the synthesis of light and space as the supreme anti-naturalistic abstraction, in its physical and aesthetic interpretation. Even the holes created by Sophie Ko on the pictorial surface through burns subtract matter to reveal, through the tension between the fragment and the unknowable whole, the mental space in which the image is built and determined as the singular incarnation of one of the infinite possible forms that in the extra-world of what is potentially visible precedes the emergence of semantic content.

The cultural memory that is deeply stratified in the artist’s works is not exhibited as a quotation, but is an integral part of her language, as it can be deduced from what could be defined the work-manifesto of this attitude, that is Battiti d’ali / Wing beats (2018), a small painting in which an iridescent trail of butterfly wing pollen crosses a black field of ink. The subject, in addition to be moving for the ability of an essential gesture to generate a new space-universe and to amaze for the preciousness of the “magical” material deposited there, reworks in a minimalist key the painting Jupiter painter of butterflies, Mercury and Virtue (1523 -1524) by Dosso Dossi, universally interpreted as an allegory of painting as a divine gift, in which Jupiter is seen painting some butterflies on a white canvas, in turn a metaphor for a supernatural palette. If here the artist stages the tools of painting placing herself with a dialogic approach in a precise chain of derivations, among which we could also mention Sineddoche / Synecdoche (1976), an installation by Claudio Parmiggiani composed of a reproduction of the painting by Dosso Dossi and a canvas with butterflies painted with a stool and a palette in front of it, in the triad La furia delle immagini / The fury of images, L’uomo è questa notte / Man is this night and The coolness of the earth / Il rezzo della terra (2021) the Albertian window is instead called into question as a founding expressive paradigm of the Western pictorial tradition. Each of these windows taken from real life (expression of an attitude towards the culture of remembrance that could be similar to that of other artists such as Petrit Halilaj or Vajiko Chachkhiani) opens onto a different landscape of earth and ashes, beyond which once again we sense the pulsating and emotionally galvanizing presence of the images.

Sophie Ko’s captivating journey into the mysterious territory of origin of images finds in this exhibition a spectacular conclusion in Metaxy (2021), a polyptych composed of glass cases filled with pure ultramarine blue pigment and gold dust which, placed in a space shielded by a wall, constitutes in my opinion the acme of the imaginative path proposed by the artist. The composition brings together the brutal spirituality of medieval religious painting, the aniconic refinements of oriental art and the visionary bursts of light of baroque ecstasies in a monumental sacral structure. The two very precious powders, merging into temporary aggregation arrangements, generate cascades of ever-changing light and color, in whose transformations the incessant metamorphosis of an image-matrix constantly shuffled by its own inexhaustible endogenous energy finds an iconic visual evidence. 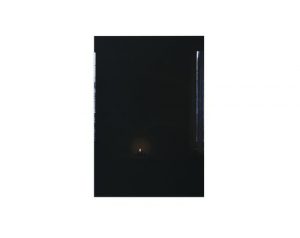 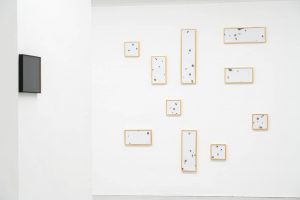 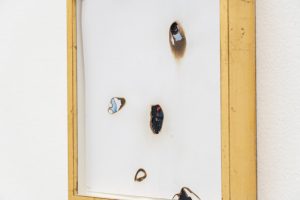 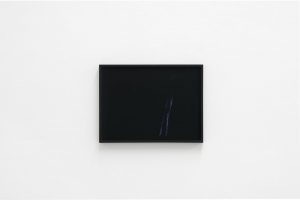 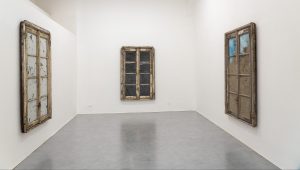 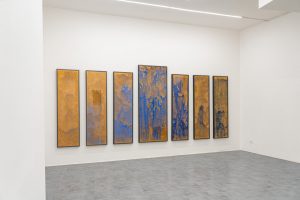