Jean Claracq and the contempor..

Studio Visit #zero. A tour in the past

Sergio Padovani. The sense of ..

Studio Visit #zero. A tour in the past

Here is the second episode of “Studio visit”, a column that was born at the time of the movement restrictions imposed by the Coronavirus, when everyone, including artists, are forced to live their private space with greater intensity.

In this difficult period, luck has been more forgiving with artists who habitually use a home studio, and less with those who have a separate studio, especially if it is far away from home. Here it will be interesting to investigate the impact that art has had on the daily lives of artists, how it has revolutionized their domestic space according to art, waiting for the possibility to produce in the studio, more or less like before.

In these days when we can return to partial freedom, we can think more clearly about the importance of space, whether it is a place of study, work or home, and ask ourselves how it affects our lifestyle. McLuhan had already revealed that “medium is the message”, meaning that all information is natively conditioned by the means of communication through which it passes.

Each new means of communication becomes, in the long run, inherent in us, a technological “extension” equal to our own arms and ears. And why shouldn’t the space in which we are immersed influence our way of living or thinking? Feng shui has been answering this question for centuries in the same way that Rietveld Schröder house answers it, functional to De Stijl’s thought. Simplifying the concept, it is natural to think that visual cleansing generates mental cleansing, as chaos generates vital energy. A small space focuses on the intimate and the detail, as a larger space opens up to new horizons.

What would become of our current lifestyle and our work if we could have a house or studio completely different from the current one? “To not have a studio, as well as to have a studio,” says Daniel Buren “automatically implies the production of a certain type of work”.

The Long Island wooden cottage bought by Peggy Guggenheim for Pollock allowed him to stay away from New York and to truly devote himself to the development of dripping, as the large spaces of the Factory allowed Warhol to activate those dynamics of collective and serial production that made him the artist we all know. And the walls of Rothko‘s studio, and the cleanliness that distinguishes it, to create such large and essential works.

What would have been of Samaras‘ work if he had had a huge studio at the beginning of his career, instead of the small 8-square-meter room that was his bedroom? How would his work have been if the kitchen had not been so narrow that it could not accommodate more than one chair next to the table, forcing the artist to contortionist positions in order to photograph himself whole against a white wall? We can ideally reconstruct the entire kitchen of Samaras thanks to the myriad of polaroids he shot there, as if it were a study, as well as thanks to the photos of the installation “Room #1” we can see the laboratory housed in his bedroom.

Of other, more lucky artists, the studio was instead preserved intact or rebuilt later as a memory and tribute to the place of origin where the work of art was born. We are talking in particular of Brancusi‘s studio rebuilt by the French state in the square of Center Pompidou, so neat and perfect because the artist has spent the last few years moving and repositioning his works as if it were an art gallery. Or that of Francis Bacon that was transferred all entire from London to the Hugh Lane Gallery in Dublin, including floors, the walls full of color test strokes and even the dust, which the artist took directly from the ground to apply it on still wet color.

An essential element for many artists, dust represents something alive and autonomous, an element that cannot be controlled by the artist in the supreme place of his self-control. Emblematic in this “Dust breeding” photographed by Man Ray on Duchamp’s Large Glass. Giacometti‘s studio was also full of dust, which the artist prevented anyone from removing to keep the mark of the real passing of time, of the fragility of life in which the timeless eternity of works of art moves.

And here is a fascinating suggestion: since the artist’s studios are a set of different works, the physical stratification of past times and styles, of attempts and errors, of uncertainties and intuitions … the place where his perennial performance takes place, where he built by himself his spaces and inhabits them, where he produces and listens to music, paints, sculpts, reads, writes … in a word, lives his essence … then studies cannot be the personification of that Gesamtkunstwerk so sought after, that work of total art of Wagnerian memory?

Wasn’t Mondrian‘s studio in Paris his home and at the same time his most perfect painting, in which he reproduced the same geometric structure and the same primary and pure colors that he used for the canvases? A sort of inhabited Merzbau, or a modern “gallery”, intended as an all-inclusive space for installation exhibition? And aren’t the floorboards of Pollock’s wooden floor one of his most beautiful works? And aren’t Duchamp‘s “Étant donnés” his secret work built inside his own studio, when everyone, for twenty years, thought he had stopped creating? 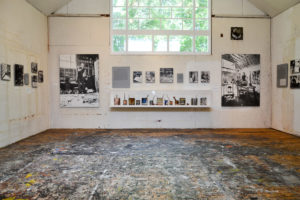 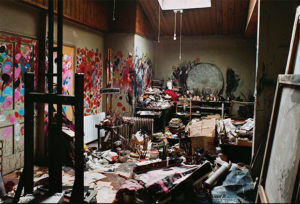 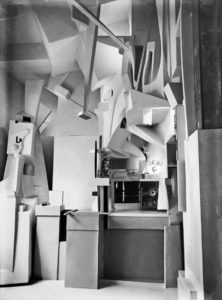 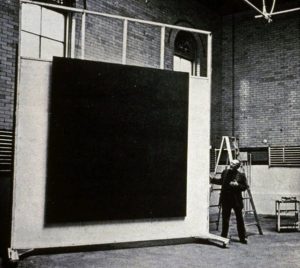 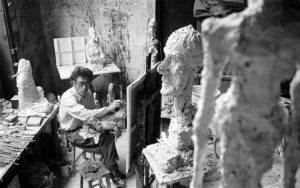 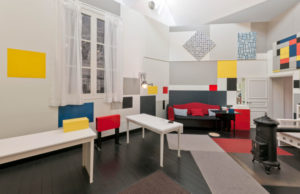