Tales from the inside_out: the look trough

Ettore Spalletti and his sky a..

Tales from the inside_out: the look trough

On Thursday, February 3rd, Tales from the inside_out: the look through was inaugurated, the new exhibition is presented by co_atto, a project space. The space has been founded in 2021 by Stefano Bertolini, Ludovico Da Prato and Marta Orsola Sironi, its aim is the redevelopment of the Porta Garibaldi train station in Milan, through the promotion of emerging artists.

The exhibition, which hosts site specific projects by Alessio Barchitta, Lucia Cristiani together with Jacopo Baco Giannitrapani and Fabrizio Falcone, Virginia Dal Magro, Giulio Locatelli, Edoardo Manzoni, Niccolò Quaresima and Andrea Spartà, develops inside the display windows of Porta Garibaldi railway station. At the exhibition also participate ArtNoble Gallery, proposing Giulia Mangoni’s works, the collective Tazi Zine, that has been entrusted with the setting-up of the archive showcase, and Luca Loreti, who created four unpublished boards for the occasion.

Tales from the inside_out: the look through shows the artists’ attempts to research, analyze, and narrate the exhibition space, reflecting on the relationship between the internal environment of the showcase and the external one, here the train station, intended as the equivalent of the city and contemporaneity. The solution for this last question is offered by the artists through the words of the philosopher Rosi Braidotti, who, deepening the concept of nomadic subjectivity, states: “The main characteristic is its being post-identity: nomadism is a process through which we trace multiple transformations and multiple ways of belonging according to where we find ourselves and how we are raised”.

Here are some of the proposals presented at the exhibition: the nomadic and spatial identity of the showcases is investigated by Alessio Barchitta, who reflects on the dynamics of fruition and assimilation of contents and information in contemporary society. The principal star of his work is popcorn, a symbol of the typical passive attitude of cinemagoers; it is emphasized how the roles of subject and object are often reversed in today’s society, making the latter the engine that moves the consciousness of the former.

Invited by co_atto for this occasion, ArtNoble Gallery presents Giulia Mangoni, who concludes her project Bits&Cream. Metabolizzazione d’Archivio, with whom she investigates her hometown as a place of research and exchange. The pictorial works, placed on two wall-paintings, will change every week and fit perfectly into Mangoni’s research, which delves into the reality of Ciociaria and the suburbs in general.

Edoardo Manzoni reflects on the dialogue between man and animal, between domestic and wild, through the topic of hunting. The works displayed belong to the Traps series: entirely decontextualized objects lose their purpose of bait, and take on different meanings instead. Manzoni draws a subtle parallelism between the figure of the artist and the hunter’s one, focusing his research on the concept of desire and beauty.

Giulio Locatelli presents the work Anti-Biblioteca (literally “Anti-Library”): warm and sensitive elements, consisting of stories, anthologies of tales, notes, represent the foundations for the cold and ferrous components that make up the actual building sites of a library under construction. The final result is the conceptualization of two being defined environments where strength and thought find common ground and eventually merge completely.

The collective Tazi Zine proposes the second stage of Abecedario Meneghino, a project started in 2019 that tells the life of Milan through a photographic collection of letters found on the streets of the city. Finally, for the occasion of Tales from the inside_out: the look through, a new selection of archived material has been presented through a site specific installation. 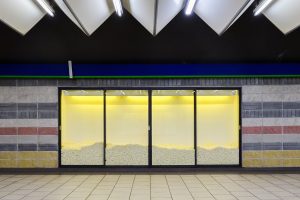 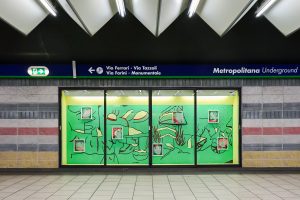 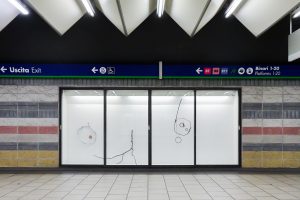 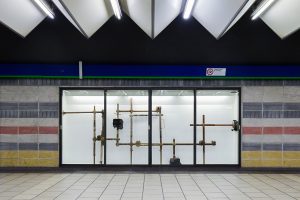