Tell me more: a double-solo by Sabina Mirri and Ve...

Pastiche. The Ceramics of Paol..

Opened on October 14th 2020, the show Tell me more, at the Alessandra Bonomo Gallery in Rome sets up a two-voice conversation thanks to the artists Sabina Mirri and Verde Edrev. The subjects of this double-solo show, different by generation and training, in this circumstance, through painting, drawing, installation and collage, relate the recent achievements of the work of each one.

Specifically, the project, as it is currently viewable, represents a development of the previous show by Sabina Mirri titled Gonna be a cult character, hosted at Alessandra Bonomo Gallery last February, where, in addition to series of collages and drawings, she proposed the habitable installation called Lo Studiolo, dated 2014. The latter, giving body and shape to the “studiolo” of the famous “San Gerolamo” by Antonello da Messina, in this previous circumstance, had formed the setting of three watercolors by Sandro Chia, placed inside. In this way, it works not only as an autonomous operation able, at the same time, of opening itself up to new relationship but also as a multiform exhibition device. In Tell me more, instead, the young Verde Edrev, author of a language already denotable for a certain recognizability, confronts with this real micro-architecture, synonymous with meditation and thought. Here, the artist places three interrelated pieces while in the gallery space she inserts other works on canvas and paper, in dialogue with Mirri’s ones who, in addition to what has been shown in Gonna be a cult Character, shows further works.

Marked, as well as all her works, by a color sometimes acid and bright in others, the paintings by Verde Edrev hosted inside Sabina Mirri’s Lo Studiolo, make up the unique artwork Look at Me. It’s me. It’s me. It is a refined game between different communicative registers, in this case the verbal and the gestural one, centered on the contradiction existing between the semantics of the first one and of the second. Indeed, while the meaning of the recomposed sentence invites the visitor to observe, the anatomical parts of the subject are hidden, through a simple but well-defined body mimic. This modus operandi is found again in artist’s other showed works, where there is always a certain degree of ambiguity, close to disquiet, between titles and visual narration. Starting from photographic shots, she redeems the bodies from their immanence, delivering them to the absolute of painted representation, through a color proceeding by veiling. Despite generating refined chromatic and volumetric idiosyncrasies, the figuration appears soft and clear at the same time, concise and exhaustive, especially where anatomy is innervated in minimal variations of shades.

In both cases, Edrev’s aesthetics are not indifferent to a sort of media language resonance, perhaps deriving from a personal metabolization of the effects of the current inflation of images that characterizes our everyday life, observed by her from her own subjective and interpretated through an evident sensitivity.

Edrev’s works, in the economy of the exhibition path, make up an interesting symmetry with Sabina Mirri’s collages, obtained by mixing paper clippings and drawing. Characterized by a bright color combined with a fast and sure sign, at times nervous, always wisely calibrated with the physicality of the paper shapes, these demonstrate, in the middle of a careful space organization, an heterogeneous iconic universe, rich in references to fields of pop culture, illustration and art history. Her alphabet, remembering some postmodern Bad painting practices, manifests the characteristics of a mature thinking about style and its expressive possibilities.

Generally, these features are also found in her latest works presented. Here, through the reference of the bath tub where Van Gogh, during his stay at the Arles psychiatric hospital, was immersed as expected by therapies, the artist suggests a tragic paraphrase of existence, sometimes in contrast, others in harmony, with the range of colors adopted, as well as with an executive gesture that, more measured or more immediate, reveals the subjectivity of the author.

Tell me more, with artworks by Sabina Mirri and Verde Edrev, is open to the public until next November 20th, at the Alessandra Bonomo Gallery. Enjoy your visit. 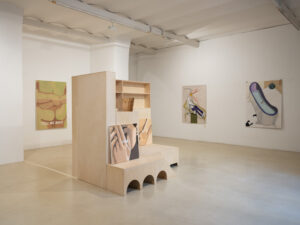 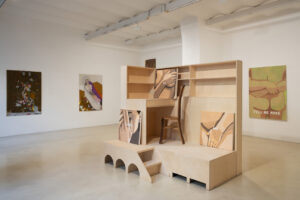 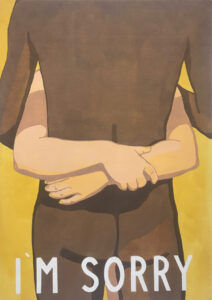